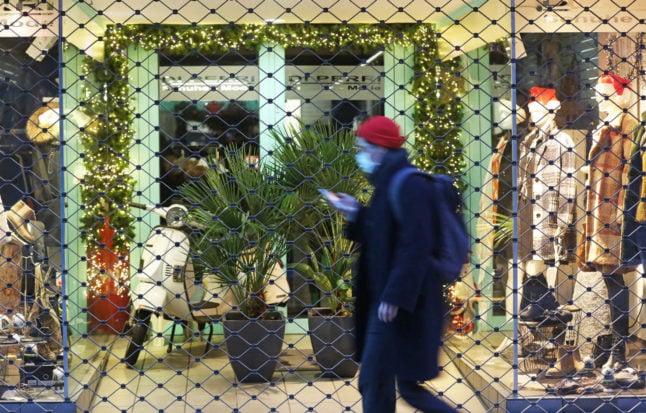 A man walking past a closed shop in Cologne on Tuesday. Photo: DPA

Members of Germany's National Academy of Sciences Leopoldina, which has been advising leaders on how to deal with the crisis, have published an urgent appeal to politicians in view of the alarming situation in the Bundesrepublik.

The group of researchers at Leopoldina want to “quickly and drastically reduce the excessive number of new infections through a hard lockdown”, they said in their statement Spiegel reported on Tuesday.

In a two-stage procedure, they said that children should not have to go to school from December 14th, and residents should be “strongly” encouraged to work from home. All group activities in the field of sport and culture should also be “discontinued”.

In the second stage from Christmas onwards, “public life in Germany should be largely suspended until at least January 10th 2021”, i.e. a “tightened lockdown”.

This includes all shops closing except those for essential needs, such as supermarkets and pharmacies.

School Christmas holidays should be extended until January 10th. And holiday trips and large gatherings during the whole festive period would have to be completely avoided.

The statement was signed by 28 scientists, including the Charité virologist Christian Drosten and his Frankfurt colleague Sandra Ciesek, the educational researcher Ute Frevert and the health psychologist Jutta Mata from the University of Mannheim.

The head of the Robert Koch Institute, Lothar Wieler also signed the plea – this is significant as he has previously held back from taking public stances because he is head of a federal authority.

The head of the ifo Institute, Clemens Fuest, together with Regina Riphahn from the University of Erlangen-Nuremberg, brought economic expertise to the discussion.

Ban on visiting family and friends at Christmas

At the last meeting, Chancellor Angela Merkel and the state leaders agreed to relax contact rules over Christmas and New Year.

Up to 10 people from any number of households can meet from December 23rd until January 1st, although there are some differences between states such as Berlin only allowing five people to meet.

However, the National Academy urgently warns against easing rules. Instead, the Christmas period should be used to drastically reduce the number of cases.

Without specifying the total number of participants that could be permitted at a celebration, Leopoldina says that “contacts should only take place in a very close circle of family or friends, limited to a few people” – followed by this rule: these contacts should remain “unchanged over the entire period”.

This means that travel and visiting different relatives and friends over the holidays would not be allowed, if these plans were to be adopted.

The experts are concerned that over the Christmas period, the already high infection rates will explode due to the festive season.

In the worst case scenario, they expect 50,000 new infections daily from the end of January if the relaxation planned by politicians for Christmas and New Year's Eve and the current level of contact remains.

“The Christmas period and the turn of the year, with their traditionally intensified and close social contacts, hold great risks for a further deterioration of the infection situation,” warn the Leopoldina researchers.