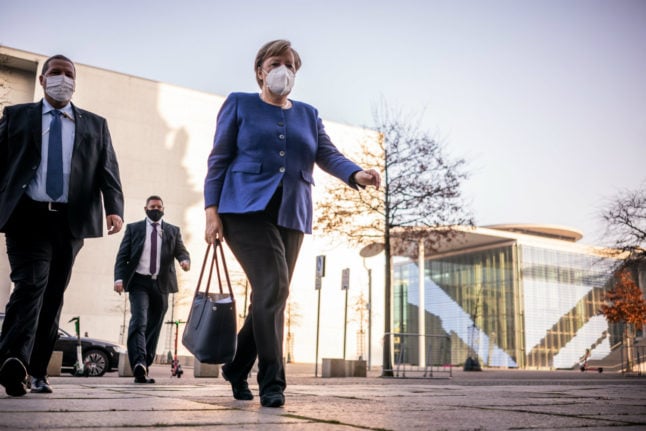 Due to the high numbers of coronavirus infections in Germany, there are increasing demands to opt for a tougher lockdown. Among the measures being discussed are shop closures after Christmas.

She said Germany was in a “very difficult situation” and that it would not be able to “get through the winter” with current measures, referring to the partial lockdown in place since November 2nd.

“We will not get anywhere on the principle of hope,” Merkel reportedly said.

Merkel is also said to have complained that there is “too much talk about Glühwein stands… and too little talk about nurses and carers”, according to participants in the video discussion among the CDU/CSU parliamentary group.

It's unclear if Merkel and the state premiers will meet again before Christmas, although it seems likely. At the moment, the next conference is scheduled for January 4th.

Health Minister Jens Spahn backed Merkel's comments. He believes stronger restrictions are necessary if the high infection rates do not go down.

He said a “short and comprehensive” lockdown would likely be most successful. “If we can't get there with the development (of coronavirus figures) in the next week or two until Christmas, we will have to discuss it,” Spahn told the Phoenix TV station.

The Minister did not rule out the possibility that there could also be another shutdown in the retail sector. “We have to make this (decision) dependent on the next few days, whether we succeed in bringing the figures down.”

Apart from closing shops, Germany could call for a stricter lockdown where people can only leave their homes for essential reasons. This is currently only in place in hotspots.

Bild newspaper reported that tough measures could be taken after the holidays until the beginning of the year. It is being discussed if supermarkets could be the only shops open between December 27th and January 3rd or 10th. According to DPA information, there are no concrete measures on this point, though.

The government and states have already agreed to relax contact rules from December 23rd to January 1st. During that time 10 people can meet, not including children. Bavaria and Baden-Württemberg have already limited the relaxation to December 26th and 27th, respectively. In Berlin, a maximum of five people (not 10) are allowed to meet.

The current rules mean a maximum of five people from two households can meet.

Why are German leaders concerned?

But politicians are worried because after more than five weeks of the shutdown there is no sign of a drop in the number of new infections.

Germany is far from its goal of bringing the number of new Covid-19 infections down to under 50 per 100,000 inhabitants over seven days. At present, no federal state has reached this mark.

On Tuesday 14,054 new coronavirus infections were reported within 24 hours. A week ago there were 13,604 new infections registered, showing the plateau.

A total of 423 new deaths were reported within a day to the Robert Koch Institute. The total number of deaths since the start of the pandemic stands at 19,342.

Meanwhile, the state of Bavaria is moving into a tougher lockdown before Christmas.

From Wednesday, Bavarians will be ordered to stay at home unless they have a valid reason such as grocery shopping or visiting a doctor, state premier Markus Söder told a press conference.

In the Lower Bavarian district of Regen, which on Monday had an incidence rate of almost 570 new infections per 100,000 inhabitants over seven days, pupils of all age groups are to be given distance learning lessons from Wednesday onwards.

Tougher measures are also being considered in Saxony, as well as some other states.

Social Democrat health expert Karl Lauterbach warned that the federal and state governments needed to consult each other quickly.

“The sooner the Chancellor makes decisions with the state premiers in order to seriously regain control of the situation, the better,” Lauterbach told the Passauer Neue Presse. “We must impose a harsher shutdown for the period after Christmas,” he added.