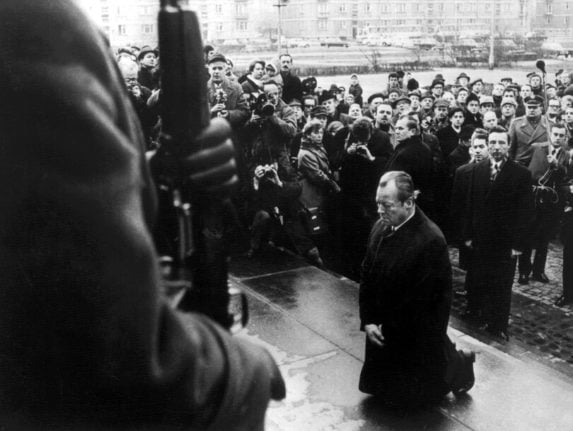 Standing in for the two heads of state, Duda's chief of staff, Krzysztof Szczerski, and Steinmeier's chief of staff, Stephan Steinlein, laid wreaths at the monument to the heroes of the Warsaw ghetto.
'Transformation through reconciliation'
Then Chancellor Brandt fell to his knees on December 7th, 1970 during a visit to the Polish capital. The gesture received worldwide attention as a plea for forgiveness for the crimes of the Nazi era and was viewed as a sign of reconciliation.
Brandt's visit to Warsaw was part of a wider new diplomacy which he called “transformation through reconciliation”, which in effect meant Germany giving up its claims to territories inside Poland, while for the first time recognising (with caveats) the existence of communist East Germany.
It came four months after a visit to Moscow in which Brandt agreed the terms of a new Ostpolitik with the USSR.

In return, the USSR and its European satellite states began to normalise relations with West Germany, thus taking the sting out of one of the most explosive fronts in the Cold War.

Conservatives accused Brandt of “treachery” for giving up territorial claims in the east. He only managed to get the deal through the Bundestag after calling a snap election.

Nonetheless, Brandt’s Ostpolitik became the paradigm that would be followed by German Chancellors for decades.