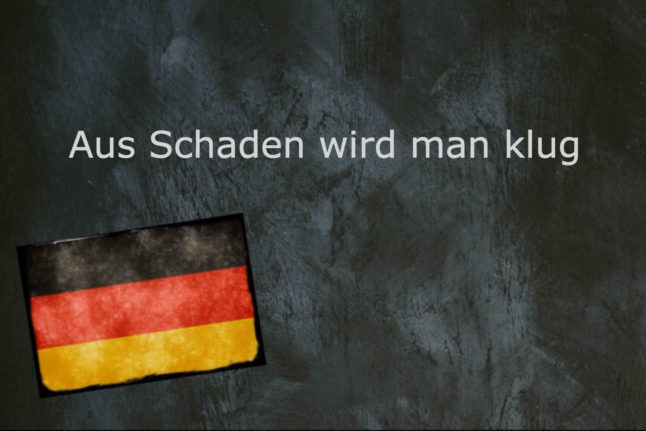 Mistakes, failure, and pain are an unavoidable part of life. What’s important is that we learn from mistakes and tough experiences and try not to repeat them too much.

That is the gist of this handy German phrase, which translates directly to “From damage one becomes smart.”

“Schaden” means damage, hurt, or harm. Though immediate harm and hurt may feel painful at first, these tough experiences can often teach us a valuable lesson.

This phrase comes from the Latin, “Quae nocent docent.” It was translated into the German originally as “Was schadet, lehrt” (“What hurts, teaches) by German Protestant reformer Martin Luther.

Martin Luther, who first translated the Christian Bible from Latin to vernacular German, translated many interesting phrases he found that had only hitherto been articulated in Latin.

READ ALSO: How Martin Luther gave Germans a language everyone could use

He is given credit for essentially coining this phrase, as he famously loved proverbs and sayings. Luther is said to have combined valuable adages from the Bible, Aesop’s stories, and everyday people into succinct aphorisms that impart wisdom. If you make a mistake and recognise it, you learn from it and will likely not make the same blunder again. If you are experiencing pain or are having trouble, these negative experiences may eventually lead to deeper insights, and make you smarter and more invincible in the future.

With the coronavirus pandemic coupled with cold and cloudy winter setting in, we are all living through moments of hurt and pain. With these tough times come valuable lessons that can only be learned through experience.

However, the supposed lesson to be learned amidst hurt and damage could be tricky to find. As American baseball player Vern Law aptly put it, “Experience is a hard teacher because she gives the test first, the lesson after.”

Whether you feel smarter after a tough go of it, or still like a fool as Rücket wrote, this saying may ring true after surviving life's many tests and battles.

After I broke my leg, I had to stay in bed for two weeks. It was painful, but I learned a lot about anatomy. From damage comes wisdom!

When I closed the front door, I noticed that I had forgotten the key. To copy this key and hand it over to a friendly neighbour in advance costs €20. Calling the locksmith who opens the door costs €300. One becomes wise from damage!