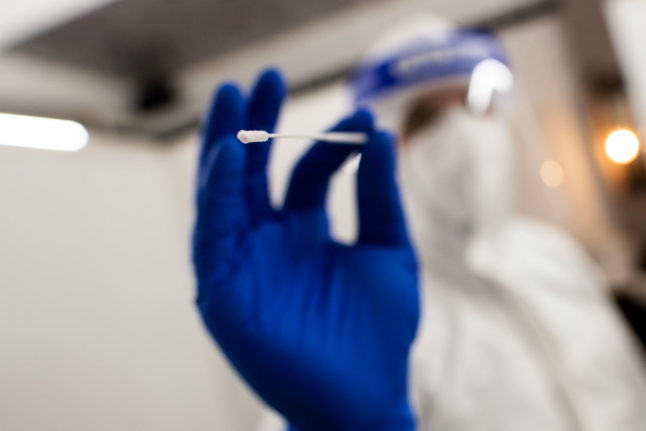 A rapid test being carried out at a restaurant-turned-testing centre in Düsseldorf on Thursday. Photo: DPA

This figure is slightly above the 22,806 cases of the previous week, RKI figures from Friday morning showed. There were also 432 new deaths reported within one day, the third highest level since the beginning of the pandemic.

The peak of 487 deaths was reached on Wednesday.

The total number of people whose deaths were attributed to a Sars-CoV-2 infection rose to 18,034 on Friday.

Since the beginning of the pandemic, there have been 1,130,238 confirmed coronavirus cases in Germany. According to estimates, around 820,600 people have recovered from the disease. This graph shows the number of daily new infections in Germany since the the beginning of the pandemic. Credit: DPA

According to the RKI management report of Thursday, the so-called seven-day R-value was 0.94 (previous day: 0.89), meaning that 100 infected people are now theoretically infecting 94 more people.

If the value is below 1 for a longer period of time, the rate of infection subsides.

Where the figures are high, it is “absolutely” necessary to take steps that go beyond the measures agreed between the federal government and the 16 states, he told ZDF's “Morgenmagazin”.

This has already been done in Saxony and Bavaria, for example, where in some cities and districts local residents are only allowed to leave their homes for “essential reasons” such as work or food shopping.

Such a decision must always be based on the local level of infections, he said. This map shows coronavirus hotspots around Germany, and where the highest reproductive rates are. Credit: DPA

Spain rejected a nationwide tightening of the partial lockdown, which has seen restaurants, bars and cultural institutions around Germany largely shut down and put limits on the size of public gatherings.

On Wednesday the oft-dubbed “lockdown light” was extended until January 10th.

'Need for a common consciousness'

Spahn appealed for a “common consciousness” among Germans: Everyone must continue to look after each other, and avoid meeting up in large groups over the holidays. Most German states have put a limit of 10 people from different households amid the festive season.

Spahn said that he had the impression that most Germans were sticking to the rules.

In addition, Spahn defended a regulation which went into force Friday, and now allows teachers and educators to test themselves for the coronavirus using rapid self-tests.

But “It's only an option”, he said, in response to criticism from Germany’s states. “I did not say that everyone has to implement it.”

Specialists had warned against self-testing, which they feel carries a risk of false negative test results.