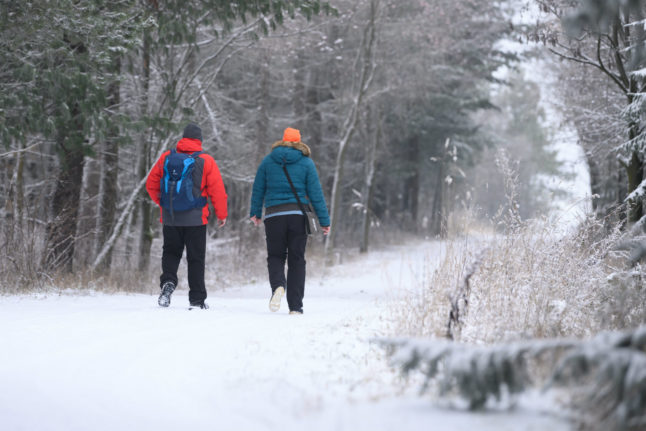 Germany advises people to do exercise alone or in pairs, like these peopel walking in Saxony on December 1st. Photo: DPA

Germany extended its partial shutdown on Monday until at least December 20th as it continues to battle a high number of daily cases and coronavirus deaths.

Health authorities in Germany reported 487 coronavirus-related deaths to the Robert Koch Institute (RKI) within 24 hours on Wednesday morning – the highest number since the beginning of the pandemic. It brings the total number of deaths registered in Germany to 17,123.

The German federal government has now published a list of rules and recommendations on how people can protect themselves and others during the colder months.

Be careful in closed rooms – and ventilate

Due to the cold and wet weather, we spend most of the time indoors in autumn and winter. However, that means the risk of infection gets higher, because the virus is mainly transmitted by aerosols, i.e. by liquid particles that spread particularly well in closed rooms.

“For this reason, it is important not to have too many people in one room, depending on the size of the room,” says the German government. Furthermore, the room should be well ventilated, so open doors and windows regularly to let in fresh air.

Take protecting yourself and others seriously

Germany is urging people not to forget the basic rules, especially for people who have to come into contact with people indoors, for example at work.

They urge people to keep a 1.5 metres distance to others, wash hands regularly, wear a face mask, download the coronavirus app and air out rooms regularly.

Particularly in the coming months with more people indoors, “airing is a simple and effective way of reducing the risk of infection,” says the government advice. Restrict private meetings as much as possible

During the winter months, private meetings indoors and outdoors with friends, relatives and acquaintances must be limited to your own household and one other household, but in any case to a maximum of five people. Children up to 14 are not part of this rule.

This was the regulation decided by the government and states, but some states have slightly different rules. In Berlin, for example, only children up to the age of 12 are exempt.

The government recommends that as a general rule you should stick to “a fixed additional household” for socialising.

In general private celebrations are not allowed during this time.

Contact rules will be eased slightly at Christmas and New Year: from December 23rd to January 1st at the latest, meetings with the “closest circle of family and friends” are allowed with a maximum of 10 people, regardless of the households they come from. Children up to 14 are excluded from this rule.

However, some states have different rules on this relaxation, such as Berlin which says only a maximum of five people can meet.

Germany stopped short of issuing a ban on the sale of fireworks at New Year. But the government and states strongly recommend that “New Year's Eve fireworks be avoided”.

In your free time you should avoid all areas where you might meet lots of people. You should also avoid any non-essential time indoors and trips on public transport that could be avoided.

Stick to distancing and mask rules when shopping

Whenever you go shopping, you must wear a mouth-nose covering in all federal states – even in front of stores and in car parks.

Make sure that there are not too many people in a shop, and comply with the maximum number of admissions to the store. If you have to stand in a queue, keep your distance.

“Also keep your distance in front of shelves or at cash desks,” says the government advice.

Do exercise alone or in pairs

Professional sporting events can only take place without spectators during the shutdown.

Recreational and amateur sports activities on and in all public and private sports facilities, swimming pools and fun pools have been suspended since November 2nd. Fitness centres and similar facilities are also closed.

The official rule is: restrict your sports activities to things you can do alone or in pairs. “Use the time for walks in the fresh air, this is good for body and soul,” adds the government advice.

If you have an infectious respiratory disease (such as a cold), call a doctor or schedule a video appointment and get a sick note. Do not go to the surgery.

Stay at home until the acute symptoms subside. The Robert Koch Institute advises you to isolate for at least five days.

“The doctor will discuss with you whether the symptoms require testing, examination or further treatment,” says the advice. The medical on-call service is available in Germany by calling 116 117. This year it should be a small Christmas celebration. Photo: DPA

In general, you should not travel and you should also avoid visiting relatives. Accommodation offers, such as hotels or holiday homes in Germany, are only provided for “necessary and expressly non-touristic purposes”, says the government.

If a trip cannot be avoided, the coronavirus rules of the state you are travelling to apply.

In particular, tourist trips abroad, including those during the ski season, should be avoided, stresses the advice.

However, there is some confusion over this recommendation because hotels in some states are allowing families to stay during the festive season.

Chancellor Angela Merkel reportedly slammed this move by the regional governments in Berlin, Hesse and some other states.

Merkel and states are due to meet again later this month (around December 15th) so we should get more clarity on travel during the festive season after that.

Useful link: Here you'll find the links to state websites for coronavirus rules in your area.