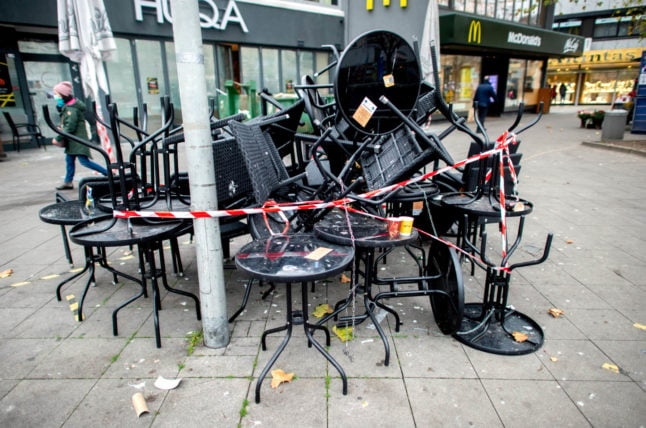 Tables and chairs taped off at a restaurant in Hanover on November 28th. Photo: DPA

“Society and the economy will not survive another year like this,” North Rhine-Westphalia's state premier Armin Laschet, of Angela Merkel's Christian Democratic Union (CDU), said in an interview with the Rheinische Post published Monday.

“We can't close down everything in the long term and the state pays billions in losses month after month,” Laschet, who is a candidate to take over as leader of the CDU and a possible successor for Merkel, said.

“A new model will be needed from the new year. Permanent closures and subsequent compensation payments will destroy the state in the long run.”

He said clever concepts needed to be developed “to provide long-term perspectives for living with the pandemic”.

Last Wednesday, Germany extended its shutdown until at least December 20th, but likely early January. Bars, restaurants, cafes, hotels, cultural and leisure facilities are closed (except for food and drink takeaway) but schools and shops can stay open.

Meanwhile, Merkel's chief of staff, Helge Braun, said he expected major damage to the German economy despite the billions in state aid.

“The Corona crisis will leave considerable marks on the economy,” Braun told the Handelsblatt newspaper. He said that the state could help to ensure that a large number of companies survive the crisis. “But it will not be without consequences,” he said.

Braun believes another economic aid package next summer may be needed. “If necessary, we must provide new incentives,” he said.

Nevertheless, Braun is more optimistic about the course of the pandemic next year. “The pandemic will lose its horror next year,” he said.

“As a society, we have to hold out through December and the months until March, sticking to the distance, hygiene and mask rules and the reduction of our contacts. Where that is not enough, restrictions are inevitable. Then spring will come and hopefully the vaccine will be ready.”

He said that the exponential growth in the number of infections had been halted at a level that was demanding but not yet over-stretching the healthcare system. But 400 deaths per day (which Germany reported last week) were too much, he said. “That is why I would have liked to have taken more far-reaching decisions in October,” said Braun.

As The Local has been reporting, new contact restrictions come into force in December allowing only two households to meet with a maximum of five people. Germany is set to relax these contact rules over Christmas.

But the President of the German Medical Association, Klaus Reinhardt, said he did not think that easing the restrictions would cause a spike in cases.

“I consider it unlikely that Christmas will become a nationwide superspreading event,” he told the Mannheimer Morgen newspaper.

If people adhere to the infection protection regulations, the temporary loosening is justifiable and even necessary for mental health reasons, he said.

Reinhardt also spoke out in favour of using coronavirus rapid tests more often. Priority should be given to health care facilities, such as retirement homes or hospitals. “Later on, it is conceivable that rapid tests could be carried out before larger events, ” he said.

On Monday Germany reported 11,169 new coronavirus infections and 125 deaths within 24 hours. This brings the total number of people who have died in connection with Covid-19 in Germany to 16,248.

A week ago the number of new cases stood at 10,864. On Sundays and Mondays, the numbers are comparatively low because, according to the Robert Koch Institute (RKI) fewer samples are taken at the weekend and therefore fewer tests are carried out overall.