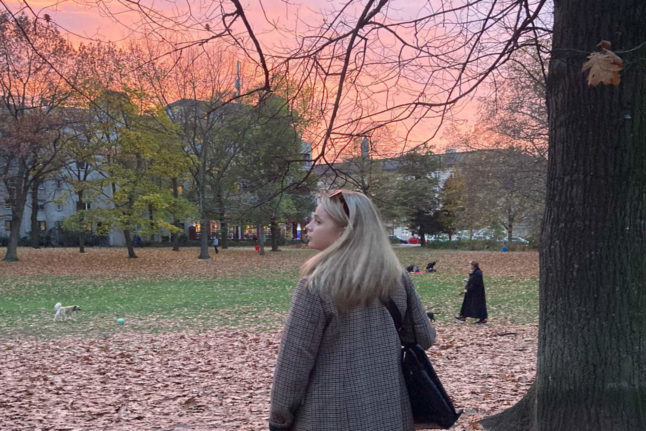 Katrina Moody in Mauerpark in November. Photo courtesy of Moody.

While newcomers to Berlin look forward to exploring the endless museums and galleries, the world famous nightlife and the diverse food scene, what happens when you find yourself moving to Berlin in the midst of a global pandemic, and the second lockdown of the year?

This is the position Claire*, 27, found herself in, arriving in Berlin at the end of September. Before Berlin, she had been based for Hamburg for two months, and prior to that was living in Paris. While her job is currently based in the Harbour City, her office remains closed, and she used that as an opportunity to move to Berlin – a city that she was more intrigued by.

“I arrived in Germany in July. Being in a new country and not being able to do the things I would normally do was hard,” said Claire, who's originally from the US.

“People weren’t having parties, there were no fitness classes, I wasn’t able to go to the office and socialize.”

READ ALSO: 'I never thought I'd settle in Germany': The foreigner who stayed years longer than planned

“I decided to move from Hamburg to Berlin, as I had heard a lot of good things about the city. The challenges that were there in Hamburg are still here in Berlin, but I do find it more laid back in certain aspects. And before the second lockdown I spent time visiting some galleries and museums and met some new people.”

Despite Claire initially feeling incredibly anxious about the second lockdown, she said that it has been better than expected, and she is navigating the city in a new way, discovering Berlin’s parks and open spaces: “I enjoy walking around the neighbourhood, peaking at the restaurant menus and noting down which places I can go to when things become open. I also like Mauerpark and listening to the music there.”

The unexpected positive of lockdown, Claire says, is that you bond more closely with the people that you have already met: “This can be an isolating and lonely time. I have been very reliant on the few contacts I have here and as a result we have formed deeper friendships.”

Socialising and meeting new people has also been key for Katrina Moody, 22, who moved to Berlin from Amsterdam in October after securing a job. She says the lockdown has completely altered the way she would typically meet people, and she has been forced to step out of her comfort zone.

“I am approaching people more often now. Usually if I went to a fitness class, I wouldn’t talk to anybody, but when I first moved to Berlin, dance and fitness classes were the only kind of social interaction I had,” said Moody, who comes from Ireland.

“I have also used an app – Bumble BFF, and I have met a couple of girls from it, people have been quite open. And I love hanging out with my flat mates – that has made everything a lot easier.” Moody at Tempelhof in Berlin in November. Photo: DPA

However, when Moody initially heard the news of the second lockdown, she said she did consider going home: ‘I panicked a lot, I was really nervous. My boyfriend was here at the time, and he left the day before lockdown. I thought I would just be alone and really bored. But after a few days, I saw it wasn’t too bad. I am still able to go into the office and spend time with my flatmates.”

“Even when you just go out for a walk or a run, it naturally feels more exciting than being in a different city, as it is still something new. Most people have not been able to experience anything new in the past year. So, it still feels like I have achieved something.”

But for those who are new to the city and live alone, it has brought more challenges.

Lisa Winkler, 26, moved to Berlin from Munich at the end of October, and experienced the city for one week before the lockdown hit.

READ ALSO: 10 mistakes everyone makes when they first arrive in Germany

Hearing rumours of a lockdown while still in Munich, she says she was unsure if she should make the move: “it is bad timing to move to a new city. I do not know a lot of people in Berlin, so initially I thought I would not be able to socialize at all, and I would be in the apartment by myself,” said Winkler, originally from Austria.

“But I wanted to come here and settle into the new job and meet my colleagues.”

“Since I can go into the office a couple of times a week, it is great to be able to socialize there. And when I am at home, I reach out to those who live near me to go for a walk or have a coffee break. People have been open as they know I am new to the city. But it can be lonely sometimes.”

But in other ways, Winkler says she has been positively surprised since arriving in Berlin, despite the lockdown: “The city has more nature than I expected, and I enjoy going to the food markets and the flea markets at the weekend. The city feels very diverse and international.”

This is something echoed by Claire. She shares that despite living in Berlin only for a few weeks before the lockdown, she caught a glimpse of what the city can be:

“I can see the fabric of the city is creative and exciting. Right now, I am just getting a slither of what it could be. I am curious to see how things are when this is over.”