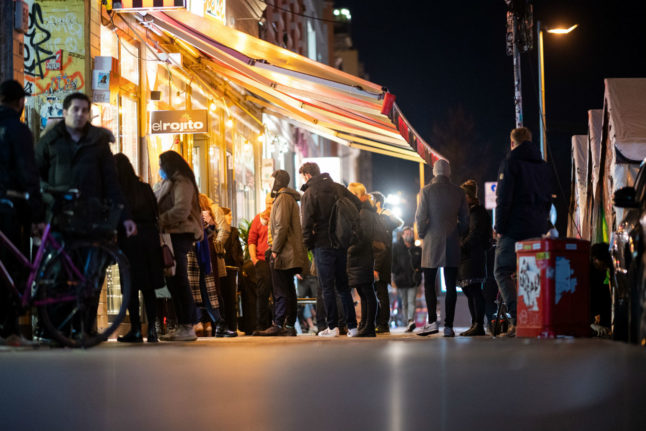 People queuing for Glühwein in Hamburg on Thursday. Photo: DPA

The institute recorded more than 22,000 new daily cases, pushing the country's total beyond the one million mark.

This brings the number of cases reported since the beginning of the pandemic to 1,006,394.

However, many infections are likely to remain undetected, partly because people are developing no or hardly any symptoms. Last Friday on November 20th, a peak in daily new infections was reached with 23,648 cases reported to the RKI.

Germany had largely contained the spread of the virus in the spring but has been hit hard by a second wave of infections.

The number of Covid-19 patients in intensive care nationwide has soared from just over 360 in early October to more than 3,500 last week.

The most populous state of North Rhine-Westphalia (NRW) has recorded more than a quarter of all cases, ahead of Bavaria's 198,000 confirmed infections. Berlin has seen 62,000 cases since the start of the pandemic.

The number of deaths related to the virus rose by 426 to a total of 15,586 by Friday, a record since the beginning of the pandemic. The RKI estimates that around 696,100 people have now recovered.

How has the pandemic unfolded in Germany?

The first coronavirus infections in Germany were confirmed by the Bavarian company Webasto at the end of January. At the end of February, Baden-Württemberg and NRW reported their first cases, and on March 10th Saxony-Anhalt became the last German state to report its first case.

As the numbers skyrocketed across the board, a lockdown came into effect to control the infection situation in March.  That was eased and during the summer there were comparatively few new cases of coronavirus in Germany.

At the end of September, in October and the beginning of November, the number of newly reported infections rose rapidly once again, but the exponential growth has stopped and recently settled at a high plateau.

Contrary to expectations, the partial lockdown in force since the beginning of November, with the closure of pubs and restaurants, has not lead to a significant reduction in infections. The aim of it was to 'save Christmas', authorities said.

The so-called 7-day incidence – i.e. the number of new infections per 100,000 inhabitants and week – has been fluctuating around 140 for more than two weeks.

Chancellor Angela Merkel this week announced that Germany was extending its current shutdown and tightening restrictions through to early January unless there is a dramatic drop in infections.

Rules will ease over the festive period to accommodate Christmas and New Year celebrations, allowing meetings of up to 10 adults from December 23rd to New Year's Day.

Like much of the continent, Germany is battling a resurgence of a pandemic that shows little sign of retreating.

Globally, more than 60 million infections and 1.4 million deaths have been recorded since the new coronavirus emerged in China late last year, according to a tally compiled by AFP from official sources.

Countries that have seen strong success against the virus are now cracking down on new outbreaks.

South Korea closed bars and nightclubs this week as it braces for a third major wave, with virus cases at their highest level since March.

Britain and France meanwhile are mulling easing lockdowns soon, but authorities have said restrictions will remain.