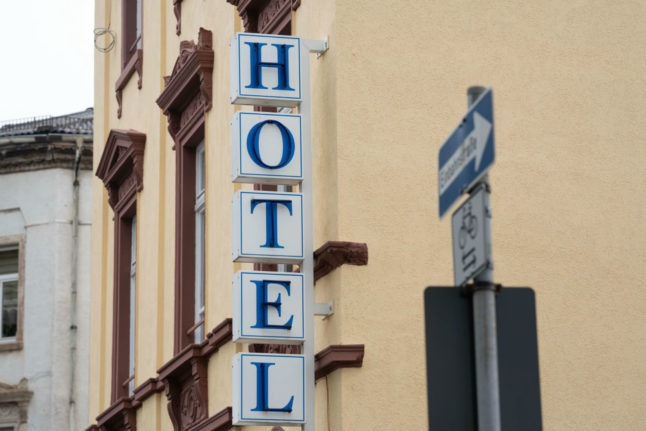 Some hotels, such as this one in Offenbach, Hesse, will accept guests visiting their families over the holidays. Photo: DPA

As of Thursday afternoon, skiers and anyone who makes a day trip to Austria for recreational purposes will be required to go into quarantine for 10 days.

“Tourist day trips or leisure activities abroad, such as skiing, are avoidable sources of risk,” Bavaria’s state government announced after a cabinet meeting on Thursday afternoon.

There are still some possibilities to cross the border for up to 24 hours without having to quarantine, but these do not include tourist and sporting purposes.

READ ALSO: Where and when will it be possible to go skiing in Europe this year?

On Tuesday, Bavarian state premier Markus Söder said he would keep slopes closed over the Christmas holidays, and called for other European countries to do the same.

Yet it’s still contested whether ski resorts in the Alpine countries of Switzerland and Austria are likely to follow suit.

Don't think Germany is going to win this 'cold war' with Austria and Switzerland to keep ski resorts closed.

Hotel in Hesse and North Rhine-Westphalia to allow guests

The states of Hesse and North Rhine-Westphalia have announced that they plan to allow people to stay at hotels over the holidays, and other states are expected to likewise loosen their hospitality rules.

“Anyone who visits relatives should have the opportunity to stay overnight somewhere,” said Hesse’s state premiere Volker Bouffier (CDU), pointing out that not every family member can provide an extra room.

Currently all hotels around Germany are closed, with the exception of business trips. The holiday period is loosely defined by most states as between December 20th and January 3rd. Christmas in Germany is set to look very different this year than all previous ones. But that hasn’t stopped the capital from sticking to one major holiday tradition: setting up a giant Christmas tree in front of the glowing Brandenburg Gate.

One Berlin nonprofit successfully ended a 15-year-campaign on Thursday to change the name of Wissmannstraße in Berlin-Neukölln to Lucy-Lameck-Straße. The street will now be named in honour of the Tanzanian politician Lucy Lameck (1934-1993) who helped push for the country’s independence, along with fighting racism.

“We are especially glad that the violent colonial history, which Germany and Tanzania share, is not erased here, but rather told under reversed signs,” said Mnyaka Sururu Mboro, the spokesman of Berlin Postkolonial who’s originally from Tanzania.

“Wissmann was a racist war criminal. Lucy Lameck stands for the undervalued contribution of Tanzania's women to the fight for our independence.”

Hermann von Wissmann (1853-1905) was the former governor of German East Africa (Deutch-Ostafrika), a German colony which existed between 1885-1918 and included mainland Tanzania, Rwanda and Burundi.

Younger generations often take the blame for causing the coronavirus spread, with every police break-up of an overcrowded illegal house party headlining the German media. But that’s not the full story.

According to a recent survey, a large majority of the younger generations in Germany show solidarity in the pandemic.

Two thirds of the interviewees between 14 and 39 currently find it important to avoid parties in order to protect family and friends, according to a preliminary evaluation for the representative study “Young Germans 2021”, which was presented in Berlin on Thursday.

Only eight percent of the respondents answer said they can't give up parties for the time being.

A large majority of the 1,602 respondents (73 percent) also have no problem with keeping their distance and wearing masks.