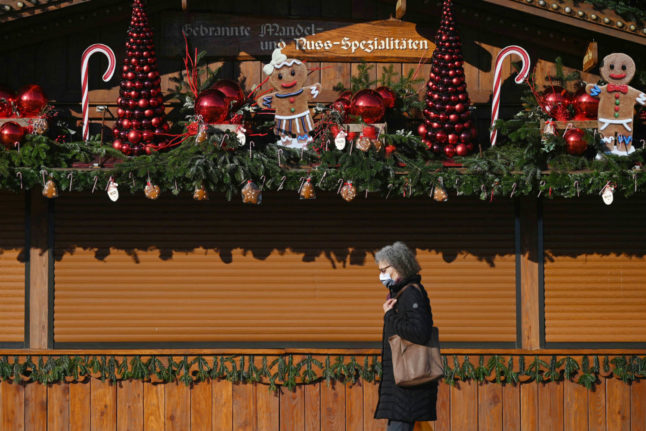 A woman walks past a Christmas market stand in Stuttgart. Photo: DPA

As soon as Germany’s partial lockdown was announced, the country's arguably earliest Christmas market at Berlin’s Potsdamer Platz – slated to open on Monday, November 2nd – was deconstructed, and others across the capital were cancelled.

But not all hope is lost for those looking to get a taste of the holiday spirit with a Glühwein and other traditional treats.

On Wednesday, a Christmas market in the western district of Charlottenburg-Wilmersdorf announced it would be opening on Monday – but with its 25 booths typically squeezed tightly together now spread out throughout the area.

READ ALSO: What can we expect from Germany's meeting on holiday rules?

It’s expected that several other markets will following suit in the coming week – both in Berlin and around Germany. A Christmas market will still be taking place in the centre of Stuttgart, for example, from Thursday November 26th to January 9th, with the stands spread out throughout the area.

Wednesday, November 25th marks the International Day of Violence Against Women. This is an issue that unfortunately affects both poor and rich countries, including Germany.

German Foreign Minister Heiko Mass of the Social Democrats (SPD) in this tweet points out the shocking fact that every day in Germany a man tries to kill his partner or ex-partner, and that every third day he succeeds.

Violence against women has been rising during the pandemic, he added, which is why it’s especially important to be vigilant of the subject.

What do Germans eat and drink?

Every four years the German Society for Nutrition publishes a survey on the eating habits of the population. This time around the study showed both healthy and not-so-healthy habits.

On a healthier note, total alcohol consumption has continued to fall, especially for beer: per capita and year it fell by 900 millilitres.

The consumption of fresh potatoes, cereal products and fruit has decreased significantly, however.

“On average, people eat 20 kilograms of apples per capita and year,” said Kurt Gedrich from the Institute for Food & Health at the Technical University of Munich. “Ten years ago it was 1.5 kilograms more.” Beer: A very German habit that Germans are partaking in less than before. Photo: DPA

A 48-year-old man armed with a knife caused several accidents on Tuesday evening in the Karlsruhe area and in southern Baden within a short time using various vehicles.

Two occupants of a car near Herbolzheim were seriously injured, and a cyclist in Karlsruhe got away with minor injuries. The motive and background of the man were initially unclear.

“We are still at the very beginning of the investigation,” said a police spokesman on Wednesday.

Due to the man's behaviour during his arrest, the investigators consider it “as quite possible” that the man suffers from psychological issues.

The figures are not just a blip because they also show an increase compared with 2018, AOK said, despite better efficiency in hospitals.

Hospitals saw fewer stroke patients during the lockdown but the death rate rose from 12 to 15 percent — presumably because some patients received treatment too late, the insurer said.