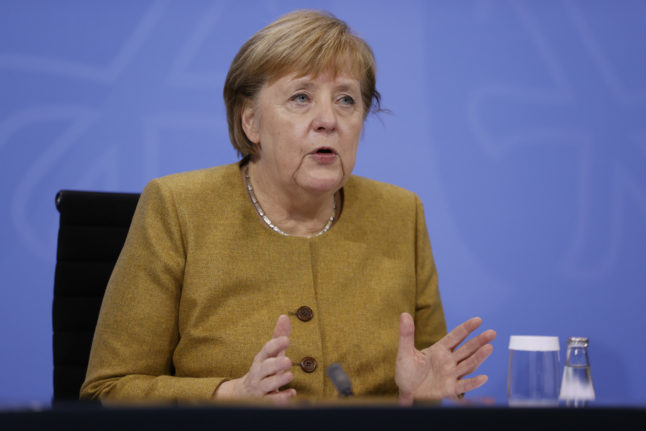 Speaking after seven hours of talks with the heads of Germany's 16 states, Merkel said the measures introduced in early November, including limits on private gatherings and the closure of bars, restaurants, leisure facilities and cultural sites, cannot be lifted given current infection rates.

The restrictions will be continued “until December 20th first but we assume, however, that … due to the very high incidence of infection, restrictions will have to apply until the beginning of January unless we have an unexpected decrease,” Merkel said.

Merkel said the exponential increase in new infections had come to a halt. “The steeply rising curve has become a flat one, but this is only a partial success. We can by no means be satisfied with this partial success,” she said.

READ ALSO: What can we expect from Germany's meeting on festive rules?

The daily Covid-19 figures remain at a “much too high plateau”, Merkel said at the press conference in Berlin as Germany recorded 18,633 new coronavirus infections in 24 hours.

Merkel stressed that a “strong effort” was needed by the public to get the numbers down. “We still haven't reached our goal,” she said. In order to ease restrictions, the infection rate would have to come down to below 50 new cases per 100,000 inhabitants per week, Merkel said – a far cry from the current seven-day incidence of almost 140.

Merkel said the Christmas holidays were “particularly important days” but said the winter period would continue to be a difficult one. She said it was therefore important for people to to avoid all non-essential social contact and travel as much as possible.

It comes as Germany logged a record number of Covid-19 deaths in one day. Health authorities reported 410 new coronavirus-related deaths within 24 hours, the Robert Koch Institute (RKI) said on Wednesday, the highest number since the start of the pandemic.

– The government and states have agreed to tighten contact rules. From December 1st, only five adults from a maximum of two households will be allowed to meet (down from 10 people currently). Children under 14 are excluded from this rule.

– From December  23rd to January 1st, the rules will be temporarily relaxed. During this time meetings with a maximum of 10 people are allowed, regardless of the households involved. Again, children up to 14 are not counted.

– There will not be a general ban on fireworks, which had previously been discussed. The government and states “recommend” that people “refrain from New Year's Eve fireworks”. However, the use of fireworks is prohibited in busy squares and streets in order to avoid larger group formations.

– The obligation to wear face masks is to be extended and in future will also apply to the areas outside shops as well as car parks. “The population is encouraged to do their Christmas shopping during the week if possible,” says the decision paper. Shops will also have stricter social distancing rules.

– Bar, restaurants, leisure and cultural facilities will remain shut. Overnight accommodation will continue to be provided only for non-tourist purposes.

– Skiing holidays should be avoided until January 10th. Germany is to discuss this at the EU level to try and coordinate with other countries.

– In order to make travel safer, the number of occupied seats in trains is to be reduced significantly. For the winter months, people should only be allowed to book window seats. At the same time, however, the capacity of the trains should be increased with extra carriages to allow for more space.

– The mandatory quarantine period is to be reduced from 14 to 10 days. This is due to the “increased availability of rapid antigen tests”. This will reduce the burden on citizens and public health authorities, say the government and states.

– Companies should make it possible for employees to work from home, or they should ensure company holidays are possible from December 23rd to January 1st.

– As planned, schools and kindergartens will remain open during the shutdown. Nationwide, the Christmas holidays are to be brought forward to December 19th. From an incidence value of over 50 new infections per 100,000 residents, masks will be compulsory in secondary schools from seventh grade.

States will in future be able to decide, depending on the infection situation, whether to relax or tighten measures.

Berlin's mayor Michael Müller said after the consultations that federal states with very good figures now have the opportunity to ease the situation. At the same time, he said, states with high infection rates had a duty to deal with the situation and examine possible tightening of measures.

Another meeting is to be held on December 15th to examine the situation.