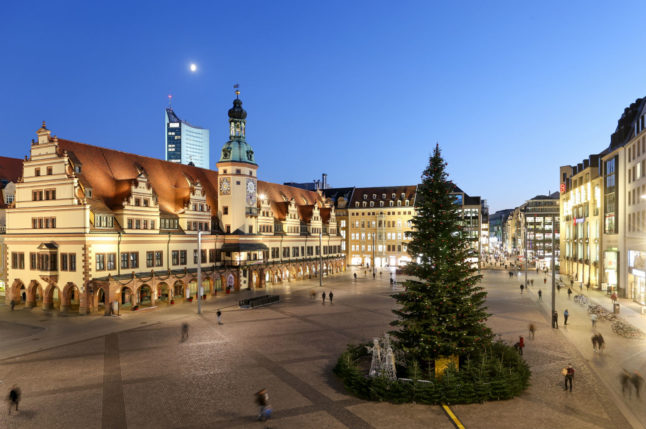 When Chancellor Angela Merkel and the 16 states proposed the nationwide November lockdown last month, they underlined their hope that it would 'save Christmas'.

Now, with just weeks to go until the festive holidays, people across Germany want to know what restrictions will be in place so they can plan their celebrations.

Here's what we know so far, and what's still to be decided.

Will rules be relaxed for Christmas?

Authorities in Germany are still concerned about the coronavirus situation. On Monday there were 10,864 new infections reported to the Robert Koch Institute by local health authorities within 24 hours.

That's roughly the same number registered one week ago. However, on the weekends and Mondays, the numbers are lower due to fewer tests being carried out and not all health authorities reporting cases.

According to the latest proposal, Germany's current partial lockdown, which started on November 2nd, will remain in place until at least December 20th. If the situation hasn't improved by this point it will be extended by two weeks.

However, measures could be eased before December 20th in German states or areas that have a lower number of Covid-19 cases.

Nevertheless, it looks like restrictions on the number of contacts that people in Germany can meet will be in place from December 1st until mid-January under the plans “in order to ensure a reduction in the incidence of infection in the medium term”.

Private gatherings with friends, relatives and acquaintances will be limited to your own household and one other household, with a maximum of five people. Children under 14 would be exempt from this rule so they wouldn't make up the numbers.

A relaxation of these contact restrictions over the Christmas period is being considered.

This is the latest proposal put forward by Germany's states:

The states propose that from December 23rd to January 1st, meetings with a maximum of 10 people will be possible, even if they come from different households. Children under 14 are excluded from this rule so wouldn't be included in the total number of people.

Other ideas put forward were:

We will know more details on Wednesday after the meeting with Chancellor Merkel and state leaders.

READ ALSO: What you need to know about proposals to extend Germany's partial lockdown

Even with strict contact restrictions, there is always the possibility of coronavirus outbreaks at family gatherings. In order to keep this risk as low as possible, virologist Christian Drosten has previously recommended a pre-quarantine period before visiting friends or family.

Instead of spending the days before meeting friends and family out and about, social contact should be cut down as much as possible. Ideally, the voluntary pre-quarantine should last about a week. If you remain symptom-free, you can be reasonably sure that you will not carry the virus into your family, although there is always a risk.

In the latest proposal by German states, a pre-quarantine period has also been called for. Will it be possible to travel during the winter holidays?

Many people are wondering if they should book flights to visit family back home or try and soak up some sun in the winter holidays.

Currently Germany is advising against non-essential travel in all cases, whether it's within the country or abroad. Hotels and other accommodation are not open to tourists.

It remains unclear whether some travel restrictions will be lifted for the festive period. However, there are signs that travel will not be encouraged. Baden-Württemberg's state premier Winfried Kretschmann dampened expectations of a winter holiday during the festive period.

“We will certainly strongly recommend that you do not take any major trips, especially not abroad,” he told broadcaster Südwestrundfrunk.

The worsening pandemic has already forced a slew of German cities, including Berlin, Frankfurt, Düsseldorf and Cologne, to announce they are scrapping or severely curtailing their Christmas markets.

Despite this, some places will set up smaller markets with strict social distancing and mask rules, and there are opportunities to buy Glühwein to takeaway from local bars. So what we're saying is: the Christmas spirit is certainly not lost.

There's also the opportunity to support your local Christmas tree seller by buying a tree there. You'll find them in various locations throughout December.

Can I do Christmas shopping?

Retailers have remained open during the 'lockdown light' in November and it will likely stay that way.

However, customers will certainly have to comply with distance and hygiene rules. In many city centres across Germany you also have to wear a mouth and nose covering – even outdoors.

Meanwhile, the retail trade is concerned about the effects of the lockdown in November, which has caused a huge drop in sales and empty city centres.

Lots of businesses are urging people to buy local this year to support them.

Under the proposals, the shutdown that's been in place since November 2nd will be extended until December 20th.

The following ideas on what happens after this point will likely be discussed among politicians in the coming days:

Can people go to church or other religious services?

Attending church services is still a part of Christmas for many people. But will this also be possible this year? Baden-Württemberg's state premier Kretschmann still thinks church services are possible at Christmas and New Year – but with coronavirus restrictions.

The federal government and states are to talk with religious communities in order to reach agreements for church services and other religious gatherings with the aim of reducing contact.

What about New Year?

As anyone who's spent time in Germany at New Year knows, Germans are crazy for fireworks. Families and friends gather in streets to set off fireworks, leaving cities in particular looking and sounding at times like war zones.

There are discussions about whether fireworks should be banned this year in Germany to stop people gathering and to ease the burden on hospitals and emergency services.

But in the latest proposal, the states have stopped short of calling for a general ban and instead want to ban fireworks in crowded public places and streets to avoid large group formations.

“The local authorities will determine the affected squares and streets,” the draft agreement states. It is only “recommended” that New Year's Eve fireworks are banned at the turn of the year. A concrete ban on sales is not planned.