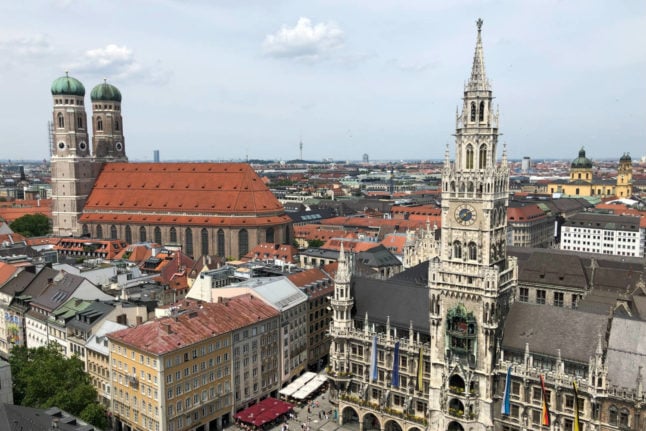 Climb up the tower at St. Peter’s Church for a great view of Munich. On clear days you can see the Alps. Photo: Shelley Pascual

I was told by an acquaintance recently that I seem more suited for Munich rather than Berlin, and having lived in Munich for just over a year now, I took it as a compliment.

The best way I can explain it is that when I moved here in late summer 2019, I could finally (and literally) take a breath of fresh air and exhale deeply. For the first time in ten years, I actually felt at home.

Having grown up in Canada and lived in Australia and the UK, I can confidently say Munich tops the list of cities I’ve lived in thus far. In fact, my partner and I often joke that we should have settled in Munich back in 2012 when I first arrived in Germany, leaving out Berlin and Braunschweig altogether.

From its endless options for nature lovers to its cleanliness and unique culture where tradition meets modernity, Munich offers a quality of life that’s hard to match anywhere else in the world.

The biggest advantage that’s come with moving to Munich has got to be the Alps, which are less than an hour’s drive away. As an outdoor enthusiast who’s into hiking and mountain biking, I now get my fill of these activities almost every weekend.

By contrast, the nearest mountains to Berlin are the Harz mountains which are over 200km away. When I lived in Braunschweig, I visited the Harz often. But now that the Alps are practically in my backyard, leaving Munich would be difficult as it’d mean giving up this luxury. Berlin has its fair share of beautiful lakes, especially in regions north of the city, but few nice (and clean!) ones in the city itself. Meanwhile the options for outdoor swimming in clear, turquoise waters directly in Munich and in the surrounding region abound.

This past summer, I discovered that certain spots along the Isar river turn into natural water parks. I was blown away by all the Münchners making a splash right in the city centre in the Englischer Garten’s streams and at Flaucher, a popular park and recreational area.

One of Munich’s biggest draws is that it’s an ideal base from which to travel to several European countries and encounter different landscapes and cultures. Over the past year I’ve been spoiled for choice, having visited Italy (the South Tyrol region in particular) and the Austrian Alps a few times.

I’ll also never forget how fascinating it was to see the Mediterranean environment change from palm trees to snow and slush as we drove through a section of the Swiss Alps while heading home from Milan last winter.

On a local level, there’s no shortage of quaint Bavarian towns to explore within a 100km radius of Munich – something I’ve just found out in recent weeks and months! Day trips to Landshut and Landsberg am Lech especially stand out in my mind. Landhut is about 70km away from Munich. Hofgarten park offers great views of the city. Photo: Shelley Pascual

Similar to when I lived in Braunschweig, nowadays it takes me less than 20 minutes by bike to get where I need to go. Essentially I get the benefits of a big city (e.g. cosmopolitanism) but have the accessibility of a smaller one; Munich is just the right size.

When I lived in Berlin, however, it took on average 40 minutes (no matter by bike, moped,  car or U-bahn) to get to my former workplace or meet friends, as I’d always have to make my way down from Pankow to Kreuzberg or Neukölln (the popular ‘hoods).

I know my Berlin experience would’ve been much different had I lived in another Kiez. But now that I live in a metropolis yet have a more relaxed lifestyle, I’ve realized Berlin was too big and bustling for me. In that sense, it also reminded me too much of Toronto, my hometown. This is one of my favourite spots in the Englischer Garten to go for a run. And it’s only five minutes from my flat! Photo: Shelley Pascual

Here, things are just calmer. And while Munich in no way compares to the German capital in terms of nightlife or hipness, at least here public spaces are kept impeccably clean. Munich U-bahn stations, moreover, don’t constantly reek of urine.

In all honesty, by the time my two years in Berlin were up, its dirtiness had gotten on my last nerve. So now I truly appreciate going for runs in lush green spaces at my doorstep like Englischer Garten, given that I used to go for runs in Berlin’s Mauerpark. #justsaying

International and ideal for startups

While Munich is very international and progressive, I appreciate that it still retains its traditional Bavarian culture. For instance, now and then you’ll see locals dressed up in Dirndl and Lederhosen for private functions – even when Oktoberfest isn’t going on.

READ ALSO: 'City of the future' tech hub to be constructed at Munich airport

I also get the feeling that there are more career opportunities here. Perhaps it’s just in my specific field, but the job market in Berlin seemed rather saturated to me, what with all the other foreigners competing for the same (largely English-speaking) roles.

And while Berlin is still the first German city that comes to mind for many with regards to entrepreneurship, perhaps it should be Munich instead. There’s ample venture capital here, notable corporates and prominent universities that offer support for founders. So if ever I launch my own startup some day, I know I’m in the right city.

…but Munich isn’t without its downsides

Along with a slew of advantages, the Bavarian capital also has its disadvantages, depending on how you look at it.

In March this year, Bavaria was the first German state to announce drastic restrictions on public life in light of the pandemic – a few days before a nationwide lockdown was imposed. This is a prime example of how things are somewhat stricter here. Going out for a paddle last summer in Lake Ammer, some 45km west of Munich. Photo: Shelley Pascual

After the first lockdown, I expected my beloved BEAT81 outdoor workout sessions to continue in Munich, as they did in Berlin, Hamburg and Cologne. After inquiring with BEAT81, I found out they had difficulties with the public order office and to this day, their in-person sessions remain unavailable to Münchners.

In terms of cuisine, I’ll admit the options aren’t as vast as Berlin. For instance there’s not one Filipino restaurant in Munich. But I’m not complaining as I’ve had top notch Ethiopian food, sushi and ramen here as well as plenty of other dishes I often crave.

It’s no secret that as one of the wealthiest cities in Germany, Munich isn’t cheap when it comes to cost of living. But to be honest, this isn’t something I’ve noticed very much, as salaries are accordingly higher.

Ultimately, the pros far outweigh the cons for me. Munich offers a lifestyle I never imagined I’d ever have: one that is active, varied, balanced and full of beauty. Now that each day is an adventure (or can easily be turned into one), there’s not much more I could ask for.