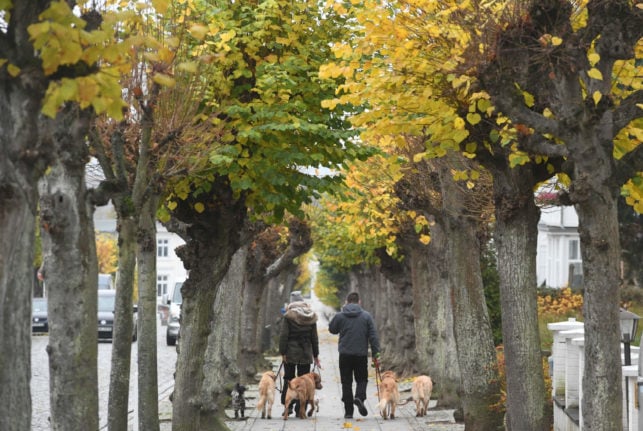 Despite the coronavirus contact restrictions in place, 14 people in Hamburg held a party in the swimming pool of an apartment building.

Now they face fines for breaking coronavirus rules after police broke up the party on Wednesday night.

A neighbour had informed the officers in the Lokstedt district due to loud music.

According to police, the party host resisted showing ID with his personal details. The 22-year-old first wanted to lock the door to his flat. Then he approached officials with his fists raised and tried to push them away. He was arrested by police.

In the man's flat officers found a cannabis plant, an ecstasy tablet and marijuana.

The Hamburger Abendblatt also reported that two other parties were broken up by police.

Under contact rules, people in Germany are in general only allowed to meet with one other household, with up to a maximum of 10 people. There can be some slight differences in these rules among states.

READ ALSO: How many people can I meet during Germany's partial lockdown?

This photo by DPA shows a nurse talking to a resident at Pauline Krone Home for the Elderly in Tübingen, Baden-Württemberg before a rapid antigen-coronavirus test.

Germany recently introduced a widespread rapid testing programme for vulnerable people in a bid to prevent serious illness and deaths. €18 billion spent on Kurzarbeit in Germany this year

The coronavirus crisis is costing the Federal Employment Agency a lot of money – particularly to finance Kurzarbeit  (reduced hours work). According to Federal Labour Minister Hubertus Heil, around €18 billion has been spent on this programme aimed at saving jobs so far this year.

Kurzarbeit is “very, very expensive”, the Social Democrat politician told the Bundestag on Friday. “But getting used to mass unemployment would be immensely more expensive for this country financially and socially,” he added.

Heil was speaking out during the final vote on the extension of special coronavirus rules on Kurzarbeit until the end of next year. According to this, employees who are on reduced hours for longer than three months will receive increased Kurzarbeit money in 2021.

The regulation means that Kurzarbeit payments will continue to be increased from their usual level, i.e. 60 per cent of wages, to 70 per cent from the fourth month onwards – and from 67 to 77 per cent for employees with children.

From the seventh month of short-time work, 80 and 87 per cent (for parents) of wages will continue to be paid. All employees who are put on short-time work until the end of March 2021 are to benefit from this.

According to current figures from the Federal Employment Agency (BA), companies registered Kurzarbeit for around 2.6 million people in August. At the peak of the first coronavirus wave in April, the figure was just under six million.

What do people in Germany want to buy on 'Black Friday'?

In recent years, 'Black Friday', a day of discounts for consumers held on the last Friday in November, has been the biggest shopping event of the year, including in Germany.

This year could be different: according to a study by market research institute GfK, customers in Germany are focusing much more on products for living and working at home.

“Many consumers are already in lockdown or expecting it,” says GfK expert Norbert Herzog. This year, computers and IT equipment for the home office are therefore in high demand, as are washing machines and kitchen mixers, cleaning agents and fitness equipment. “Covid-19 has led to a shift in purchasing intentions from 'want to have' to 'must have',” Will you be buying discounts online? Photo: DPA

Meanwhile, consumers are likely to buy more online this year, rather than flooding city centres. The trend towards online shopping has continued even after the lockdown in spring.

Germany's Green party came together on Friday for a digital party conference.

They were set to debate and vote on where they stand on several issues such as climate protection and universal basic income, reported DPA.

Even though the party is not yet talking about an election programme or the Greens' candidate for chancellor, members are already making a start on next autumn's state and federal elections.

The ambitious goal: to take up the fight with Angela Merkel's Christian Democratic Union (CDU) and the Christian Social Union.

The Union is a “giant sham”, Habeck told the newspapers in the Funke Media Group on the Friday. “The high level of support for the Union is the support for the Chancellor. But Mrs Merkel will not run again,” he added, pointing at Merkel's move to step down from politics when her term ends next year.

The Greens have in the past few years been riding high in polls. But during the crisis support has shot up again for the CDU/CSU, probably due to Merkel's handling of the pandemic.