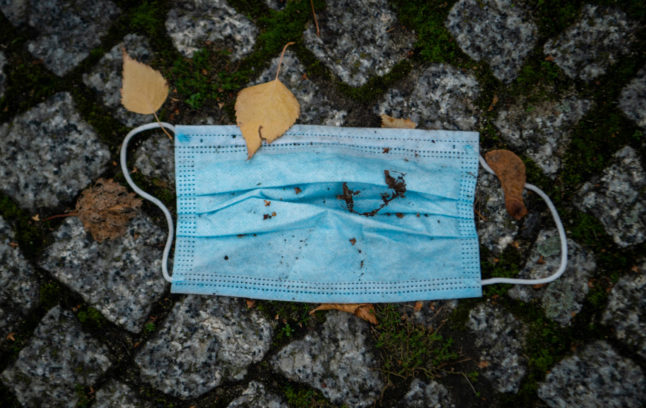 A face mask on the ground in Berlin. Photo: DPA

On Friday morning, the Robert Koch Institute (RKI) reported 23,648 new Covid-19 infections within 24 hours, which is more than the previous peak recorded one week ago (23,542).

It brings the total number of coronavirus infections recorded in Germany so far to 879,564.

Around 579,100 people are considered to have recovered from the virus.

Where in Germany is most (and least) affected?

Across Germany, the so-called 7-day incidence on Friday morning was 139.0. That means there have been on average 139 cases per 100,000 residents in the last seven days.

Compared to the previous day (138.9), the incidence has increased slightly.

On Friday morning, however, no federal state exceeded the value of 200 cases per 100,000 inhabitants in seven days.

Several districts continue to exceed the incidence level of 300 cases per 100,000 residents in seven days.

The map by DPA shows the most affected districts in Germany. Meanwhile the reproductive number, (R0) which shows how many people someone with coronavirus goes onto infect, is currently at 0.88.

If the R number is below 1, an infected person infects less than one other person. In order to keep the current infection situation under control, experts say it should be below 0.7.

Germany fared well in the first wave but is struggling to get numbers down at the moment. A partial shutdown has been in place across Germany throughout November.

Chancellor Merkel had wanted to introduce tougher measures on Monday November 16th but the state leaders did not agree to this.

Instead, a number of strong recommendations were issued to people in Germany to cut down on contacts.

A meeting will take place on Wednesday November 25th where Merkel and states will decide if measures should be tightened and if they will be extended beyond November.