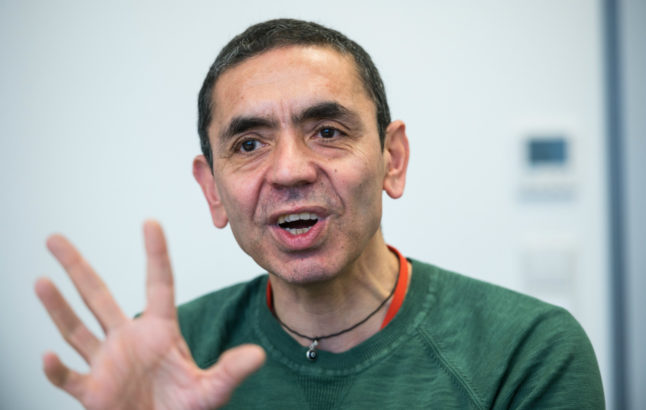 “We are working at full speed,” he told AFP in a Zoom interview, confirming that the companies plan to apply for emergency use authorisation of their jab in the US on Friday, while European regulators will receive another batch of data “next week”.

“There is a chance that we can receive approval from the US or Europe or both regions this year still,” said Sahin. “We may even start delivering the vaccine in December,” he added, “if everyone works together very closely”.

“There is a chance that we can receive approval from the US or Europe or both regions this year still,” said Sahin, 55, who is also BioNTech's chief executive.

“We may even start delivering the vaccine in December,” he added, “if everyone works together very closely”.

The BioNTech/Pfizer shot and another one being developed by US firm Moderna have taken the lead in the global chase for a vaccine, after large-scale trial data this month showed that their jabs were around 95 percent effective against Covid-19.

The twin breakthroughs have lifted hopes for an end to a pandemic that has infected more than 56 million people and caused more than 1.3 million deaths worldwide since the virus first emerged in China late last year.

The US, the European Union and a slew of other nations have already placed orders for hundreds of millions of doses of the top vaccine candidates in development.

Health workers, carers and people considered at high risk for severe Covid-19 are set to be first in line for the jabs.

Speaking from the western German city of Mainz, Sahin said if all the players involved — governments, pharma companies and vaccine logistics firms — “do a really good job”, then “we can succeed in vaccinating 60 to 70 percent of the population by the autumn of 2021.”

“And when we've accomplished that then we could have a normal winter. Without another shutdown.”

Beyond the US and EU, more than 30 countries are at different stages of negotiations to secure the BioNTech/Pfizer vaccine, Sahin said.

With concerns growing that poor nations could be left behind in the scramble, Sahin said BioNTech was talking to organisations like the World Health Organization and the Bill and Melinda Gates Foundation on distributing the vaccine “worldwide”, and finding ways to reduce its cost.

The price of the BioNTech/Pfizer vaccine is expected to be around $20 (€17) per dose, with a booster shot to be taken 28 days after the first.

Sahin and his wife Ozlem Tureci, both children of Turkish immigrants to Germany, founded BioNTech in Mainz in 2008. They set out to fight cancer using an experimental technology known as “mRNA”, before the pandemic shifted their focus.

No mRNA vaccine has ever been approved but both the BioNTech/Pfizer and the
Moderna efforts are based on it.

The technology uses synthetic versions of molecules called “messenger RNA”
to hack into human cells, and effectively turn them into vaccine-making factories.

Other contenders in late-stage testing like AstraZeneca/Oxford University and Johnson & Johnson are using the traditional approach of injecting people with modified viruses to trigger an immune response.

Sahin said he was “very confident” his vaccine was safe, a day after Pfizer and BioNTech announced that a completed study of their trial — involving some 43,000 volunteers, more than 21,000 of whom received the jab — showed no serious side effects.

German Chancellor Angela Merkel, a former scientist who has been praised for her handling of the coronavirus crisis so far, on Thursday said “we don't want to take any risks” on a vaccine, and that the latest news was encouraging.

Sahin said he and his wife planned “of course” to get their jabs as soon as
possible.

In a nod to vaccine sceptics, he said the only option was to keep providing “answers, information and transparency”.

He predicts that many people will want to be innoculated once a vaccine becomes available, numbers that would only grow when those people shared their positive experiences.

One big question that remains unanswered is how long the vaccine's protection lasts.

Sahin estimates it could be “at least a year, if not longer” but he stressed that more data was needed to reach a final conclusion.

A key challenge with BioNTech/Pfizer vaccine lies in the distribution, since it needs to be stored at minus 70 degrees Celsius.

Sahin said Pfizer and BioNTech would use special cool boxes to store and transport the vaccine in the first few months.

But they are already developing a “second generation” of the vaccine that could stand warmer temperatures, he said.