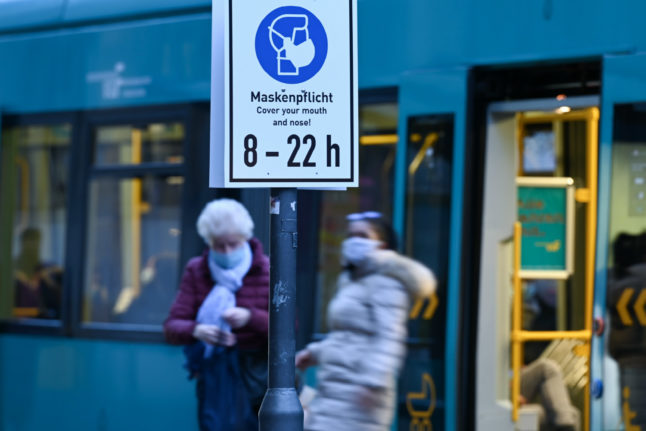 Germany is currently in the middle of a partial shutdown aimed at stemming the spread of coronavirus. Is it working? Here's what you need to know about the situation this week.

On Thursday November 19th, the Robert Koch Institute (RKI) reported 22,609 new infections in 24 hours. RKI head Lothar Wieler said the numbers had “stabilised at a high level” but were still “too high“.

On Monday and Tuesday this week, new infections were also below the values of the previous week. However, it remains to be seen whether a decreasing trend will now be seen.

Chancellor Angela Merkel pointed out on Monday that Germany had managed to “break the dynamic of new infections” after restaurants, leisure facilities and cultural sites were ordered to close from the start of November.

“We still have a long way to go but the good news is that we have halted the exponential growth for now,” Merkel said.

In total, 833,307 people have been infected with Sars-CoV-2 since the beginning of the pandemic in Germany.

2. What about deaths, recoveries and active cases?

The RKI said on Thursday 251 deaths were reported within the last 24 hours. Health experts say the number of deaths has been increasing since the beginning of September (and at a faster rate from October), likely because more older people have been contracting Covid-19.

According to the RKI around 562,700 people are considered to have recovered.

The number of active cases on Tuesday evening was 272,700 – that is about 800 less than the previous day when it was 273,600, according to the RKI situation report. This is an encouraging sign.

3. Which places in Germany are most affected?

According to the RKI, the 7-day incidence rate on Wednesday for Germany was 138.9, which was lower than the previous day (141.4).

Politicians and experts say they want to get that number down to an average of 50 coronavirus cases per 100,000 residents in seven days. At this level, health authorities can track and trace infection chains.

Coronavirus cases are currently highest in the places detailed on the DPA map below. The worst affected areas are coloured purple and dark red. The states of Mecklenburg-Western Pomerania and Schleswig-Holstein are currently the least affected by the virus.

The graphic in the below tweet by Zeit Online gives an idea of how the coronavirus pandemic has progressed throughout the year.

A graphic from @Zeit showing the two Coronavirus waves spreading throughout Germany pic.twitter.com/kxfaCbpVK4

The RKI reported the reproductive value or R number on Tuesday night as 1.0.

The fact that both R-values have fallen to values around and below 1 is a good sign. It means that an infected person usually infects a maximum of one other person with Sars-CoV-2. However, experts want this number to be significantly lower. According to experts, an R value of 0.7 or lower would be ideal to get the infection situation under control.

There are concerns about the rising number of Covid-19 patients.

According to the the German Interdisciplinary Association for Intensive and Emergency Medicine (DIVI) Register, 3,542 Covid-19 patients were in German intensive care units on Wednesday morning.

READ ALSO: How serious is the situation in Germany's hospitals?

The RKI said in its report that “the number of Covid-19 patients requiring intensive care has strongly increased, from 655 patients on October 15th to 3,517 patients on November 17th”.

About two weeks later on the report for November 10th there were 3,127 registered coronavirus patients in intensive care, with around 56 percent receiving (1,737) ventilation.

A total of 21,935 of 28,347 intensive care beds in Germany are currently occupied. Meanwhile, 12,069 ICU beds can be made operational within seven days as emergency reserves.