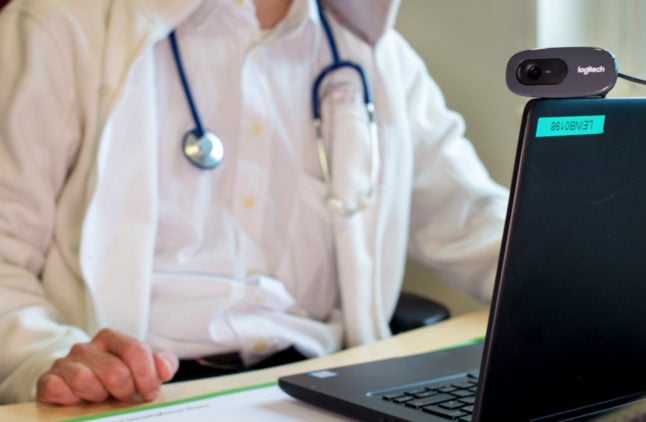 A new draft bill put forward by Health Minister Jens Spahn says employees in Germany should be given the opportunity to be put on sick leave via a video consultation call – even if they don't know the doctor.

According to the bill, first-time sick leave notes and renewal by digital means should be possible even if there is no personal contact between the patient and doctor.

“Particularly in the case of simple incidents of illness and in order to avoid infections via waiting rooms, it should also be possible to determine incapacity to work within the framework of video consultation hours in the context of exclusively remote treatment,” says the draft bill for the “law on the digital modernisation of care and nursing”.

Since mid-July, it has been possible to take sick leave for a maximum of seven days, also by video. This is to save patients the trouble of going to a doctor's surgery. The prerequisite is that the insured person is known to the doctor's practice and the illness allows a video examination.

The digital move is being pushed forward independent of the coronavirus pandemic. Yet several remote options for patients have sprung up as a result of it.

READ ALSO: Doctors in Germany to be allowed to grant sick leave by video

Germany may not be the first nation that comes to mind when you think of humour. But, as we all know, Germans are really funny and not afraid to make fun of themselves.

So we were impressed by these Christmas decorations which show toilet paper really is the must-have accessory of 2020.

These tree decorations are available from Butlers for €4.99… it's tempting, we have to admit.

A new study shows that lower earners in Germany have little financial incentive to increase their weekly hours.

Full-time work or an increase in hours for part-time workers is hardly worthwhile financially for single people on lower wages, according to a study published by Ifo researchers Andreas Peichl and Maximilian Blömer for the Bertelsmann Foundation.

An additional gross hourly wage of €10 results in only €2.50 to €3.90 (of that €10) going to those without children after tax and social security contributions.

The experts say it's a similar picture for single parents with two children. Even in couple households, second earners are burdened with high taxes and contributions if they work part-time or full-time, according to the study.

“This is not fair and there is no incentive, especially for women, to work more, even though baby boomers are now gradually retiring,” said Peichl. Should you up your hours if it's not worth it? Photo: DPA

720,000 Germans not recycling due to Covid quarantine

Germany is known for taking recycling seriously. It's even written in law that households should separate their waste under the Recycling Management Act.

But new recommendations mean that hundreds of thousands of Germans are breaking the separation rules legally – because they're in coronavirus quarantine, reported Welt.

People in quarantine are encouraged not to separate their household waste and instead to dispose of it in the residual waste bin. That includes packaging, food leftovers and waste paper: all in the same bag.

More than 720,000 people in Germany are currently in quarantine, a survey by Risklayer think tank shows. This figure is expected to rise significantly in the coming weeks, particularly as the government and states have urged people to quarantine if they have cold or flu symptoms.

It is recommended by the Federal Environment Ministry because it reduces the risk of waste workers or neighbours becoming infected by the virus through contaminated waste. And the crisis has led to a higher volume of waste anyway because people are spending more time at home. “Due to the closed shops and restaurants, it is foreseeable that more service packaging in particular has been used for food and beverages,” predicted the Federal Environment Agency.

Remondis, one of the largest waste management companies in Germany, agreed. A spokesperson said the volume of waste is about five percent higher than usual. Although this is manageable, the company is at the edge of its upper capacity, raising concerns about waste overflow.

However, Remondis is in favour of the municipalities' demanding that waste in quarantined households is not separated to protect their workers.