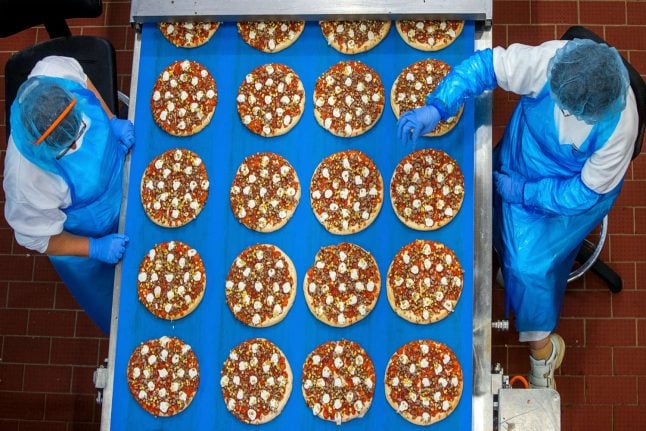 You might have seen (or used yourself) one of the bright yellow “package stations” set up to collect incoming parcels.

In fact, 50 percent of households in Germany have one of Germany’s 6,000 Packstationen nearby. Due to a high demand, the Deutsche Post DHL is planning to double the number of these stations by 2023 to 12,000. Following autumn-like weather on Sunday, temperatures around Germany have been dipping on a daily basis. Make sure to layer up, as Tuesday and Wednesday will see temperatures between 10 and 13C.

By the weekend, the mercury will drop between 2 and 6C on Saturday, and 3 and 8C on Sunday.

A weather front which is travelling over Scotland and the North Sea is responsible for the temperature drop, reported the German Weather Service (DWD) on Tuesday.

A Berlin demo against current coronavirus measures, planned to take place Wednesday in front of the Bundestag, was cancelled by its organisers.

The reason is “the risk of violent clashes following a massive mobilisation of left and right-wing extremist groups,” according to a message from the organiser in the messaging app Telegram.

Yet it’s still unclear if the demonstration with 500 registered participants will take place anyway, according to police.

Recent demos against coronavirus measures have turned violent. On Sunday November 8th over 20,000 people gathered in the eastern city of Leipzig to protest mask-wearing measures.

But when police asked them to leave, the demonstrators instead set off on a march down one of the city's major streets, attacking police and journalists and throwing objects including fireworks

In Hanover, a Catholic priest has already rented a football stadium to celebrate Christmas mass together despite the coronavirus pandemic.

But many in the religious community are questioning if it’s a good idea to celebrate in person following a recent incident: Despite all the precautions taken, 27 out of 28 participants on a trip to Italy from the diocese of Mainz were infected with coronavirus.

Therefore, those who want to play it safe and celebrate at home should not go without divine assistance. This year the German Bishops' Conference wants to publish a special “house liturgy” for this purpose, after which the faithful can celebrate Christmas at home. Such frozen pizzas, now spiking in popularity, have been available in Germany for over 50 years. Photo: DPA

Cabbage out of a can and frozen pizza? In the past these foods might have seemed like a last ditch measure when we didn’t have time to cook.

But that all changed for many people during the coronavirus pandemic.

Germany’s Statistical Office just published buying habits for the first quarter of 2020 for pre-made meals, bas. Data are already available for the first two quarters – including the time of an intense Hamsterkauf (panic buying) in March and April.

The German Frozen Food Institute recently announced a boom in deep-frozen pizza – sales had grown by seven percent in the first half of the year, attributing it partially to people stockpiling food amid the crisis.

In addition, according to a study by the market research company Nielsen, German bought 168 million packs of frozen French fries, roasted potatoes, croquettes and co. in the first half of the year – an increase of around 18 percent over the same period last year.

Thank you for reading. If you have any thoughts or questions about life in Germany, you are always welcome to email our editorial team at [email protected].