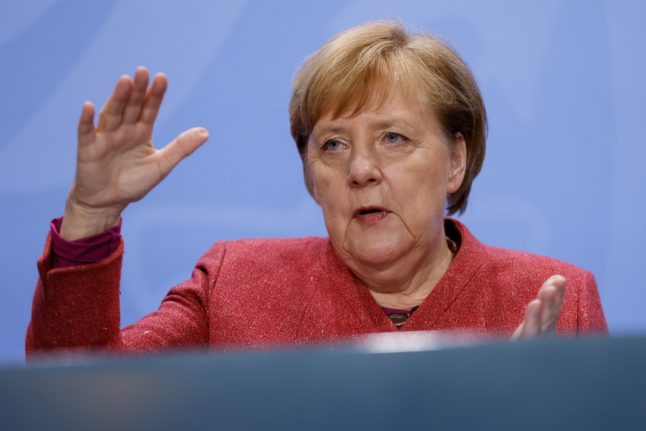 Speaking after talks with the leaders of Germany's 16 states, Merkel said the country had managed to “break the dynamic of new infections” after restaurants, leisure facilities and cultural sites were ordered to close from the start of November.

But she said state premiers did not have any appetite to up the ante and introduce tougher curbs to not only stabilise but also bring down infection numbers.

“We still have a long way to go but the good news is that we have halted the exponential growth for now,” Merkel told reporters.

The veteran chancellor had earlier sought to agree further measures such as halving class sizes and having all pupils wear masks during lessons.

Europe's biggest economy began a new round of shutdowns in November, set to last for four weeks and closing restaurants, cultural venues and leisure facilities to curb transmission of Covid-19.

But while new cases are plateauing at below 20,000 a day, the numbers are still too high for officials to keep track of the infection chain and thereby break the transmission.

During talks to take stock of the situation, Merkel renewed her plea to Germans to dramatically restrict their contacts.

“Every contact that does not take place helps to fight the pandemic,” she said.

That means limiting contacts to an “absolute minimum” and socialising with just one other household, the text agreed by the federal and regional governments says.

All private parties should also be cancelled, it adds. Citizens should also avoid unnecessary private trips and day trips for tourists, as well as visits to areas frequented by lots of members of the public.

The document urges anyone with signs of a cold to self-isolate until they are free of symptoms, and to contact their doctor, particularly in case of a fever or a loss of taste or smell.

The government will also offer particularly vulnerable people such as the elderly, the sick or those with pre-existing conditions reduced-price FFP2 masks from December onwards to protect against the virus.

But the final version of the text left out other proposals, backed by Merkel, that would have seen stricter rules imposed in schools and daycare centres.

A decision on plans for how to stop the spread in schools will likely be taken in future. “At the next conference, the federal government and states will discuss how to reduce the risk of infection in schools in hotspots,” Merkel explained.

The question of whether restaurants, cultural facilities or fitness studios can reopen in December also remains unanswered at this point.

Leaders of several states pushed back against Merkel, insisting on holding off on fresh curbs to allow more time to gauge the impact of the current month-long shutdowns.

Merkel and the state premiers will meet again on November 25th when new decisions are expected, as well as a rough plan for December and January.

Bavarian premier Markus Söder, speaking at the same press conference, said he had “little hope that everything will be fine at the end of November”.

It's therefore “better to prolong the measures than to stop them prematurely”, he said.

Merkel has repeatedly warned Germans to brace for a difficult winter but has also held out hope that families would be able to gather for Christmas.

Germany fared relatively well in the first wave of the pandemic, but numbers have dramatically shot up in the autumn.

On Monday, the Robert Koch Institute for disease control reported 10,824 new cases over the last 24 hours, bringing total infections to date to 801,327.

The 7-day incidence on Sunday was 143 cases in seven days per 100,000 inhabitants. The German government's aim is to reach an incidence of 50. At that number it is possible to trace individual contacts of people infected.

The number of people in intensive care in hospital has also climbed at an alarming rate, from around 360 in early October to more than 3,300 now.