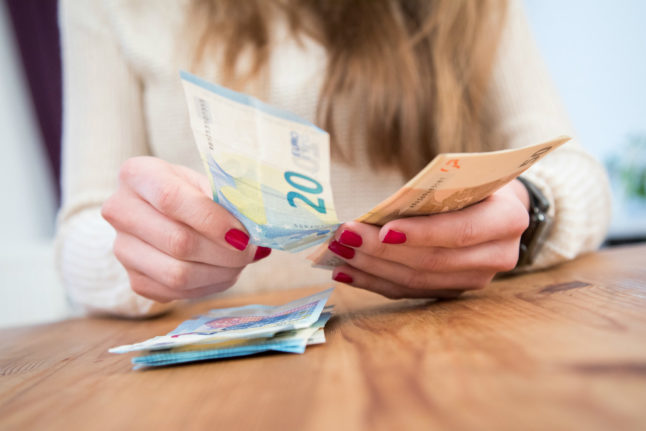 It sounds like a dream come true: imagine waking up every month to €1,200 delivered into your bank account without having to work for it.

Well, that's exactly what will happen for just over 120 people in Germany from next year. They will receive the monthly cash injection from spring 2021 for three years, as part of the Pilotprojekt Grundeinkommen (Basic Income Pilot Project) study.

The aim of the project, which is being supported by the German Institute for Economic Research (DIW Berlin) as well as scientists from the Max Planck Institute and the University of Cologne, is to gain a scientific understanding on how people's behaviour and attitudes change when they receive money regularly without conditions.

So just why are researchers looking into the idea of giving citizens an unconditional monthly payment?

“We believe that the world today is facing a lot of big challenges such as climate change and populism,” project manager Janine Busch told The Local.

“We want to test if individuals become more resilient with the safety net of a basic income. Because a clear head could help find solutions and help adopt other perspectives. We ask ourselves questions like: will ego turn into eco?”

Mein Grundeinkommen (My Basic Income), a startup based in Berlin, is no stranger to research on this topic. It has been giving opportunities to people for one-year payments of €1,000 per month for six years now.

But this is the first ever long term study on basic income in Germany. “The difference to other studies is that the pilot project doesn’t only take a look at jobless people but also people who work,” said Busch. “It’s unconditional so participants don’t have to show specific behaviour to stay in the study.

“And the amount we’re giving – €1,200 a month for three years – secures not only livelihoods but also gives you the ability to take part in society.” 'People have become more aware in the pandemic'

The project has been bowled over by the support it's received. They were aiming for up to a million people to apply to take part by November. But that target was reached less than 72 hours after the application opened.

In fact, a massive 2.1 million people applied by the November 10th deadline.

Now 20,000 people will be selected and extensively interviewed about their life situation.

From that group, around 1,500 people will be selected for the three-year income experiment. A total of 122 will receive the basic income and 1,391, who won't get money, will form the comparison group.

Busch believes the pandemic has fuelled interest in a different way of living.

When the economy was closed down in spring – and there's also a partial shutdown for the month of November – many people in Germany received money from the government in the form of aid with no conditions attached.

“You can see that during the past months in the corona crisis people have become more aware of the idea of universal basic income (UBI),” said Busch.”

“The question changed from what if people don’t want to work anymore to what if people can’t work anymore. It also reached people who never thought UBI could be a game changer. The timing worked although we did not plan to start it like that.”

Busch also thinks the crisis has given people time to think about what they really want from life.

“People stopped and thought: ‘What am I actually doing?’ That’s also the idea of universal basic income – to get people off the hamster wheel or “Hamsterrad”.

“For people to stop and say: ‘Is this going right?’ They can take a break and look around themselves. 'I have to function but how can I contribute to make a better society when it comes to, for example, disposing garbage, and all those problems that we’re facing.'”

The project is being supported by around 151,008 private donors who are interested in finding out how universal basic income affects people's lives.

“It’s financed by people like you and me,” said Busch.

The study has also brought on board renowned scientists, including behavioural economists, psychologists and public welfare researchers.

Is this a model for the future?

Currently, no countries have a universal basic income scheme in place according to a report published earlier this year by the World Bank.

However, there have been several pilot projects. Only two countries – Mongolia and Iran – had a national UBI in place for a short period of time.

So could this be a good model for Germany to roll out in future?

The pilot project leaders are not making any pre-judgements – they just want to wait and see how the experiment plays out.

But politicians will likely be watching closely to see what the results are.

If you’ve applied for the project, you’ll be notified if you’ve been selected or not. This will happen in January.

For those selected, you’ll have to answer a baseline questionnaire which will take 25 minutes. Next there will be another selection for the final participants. The payments will start in spring.

This study has one condition: participants must fill out a total of seven questionnaires during the three years, each of which takes about 25 minutes to complete. If the questionnaires are not filled in, the payments will be stopped.

Researchers also aim to talk to some willing participants in more detail.

“We would like to interview a couple of people, although it’s not mandatory, to get to know more about the reasons why people act like they acted,” said Busch.

Who are scientists looking for to take part?

Busch said the team is open and it depends who has applied.

“At the end we have to select the specific group,” she said. “We can't take a look at the society as a whole with 122 people plus the control group. We would not see any effects if we compared four jobless people and two millionaires.

“We have to look at the same kind of people. We need a specific targeted group and that depends on the data.”