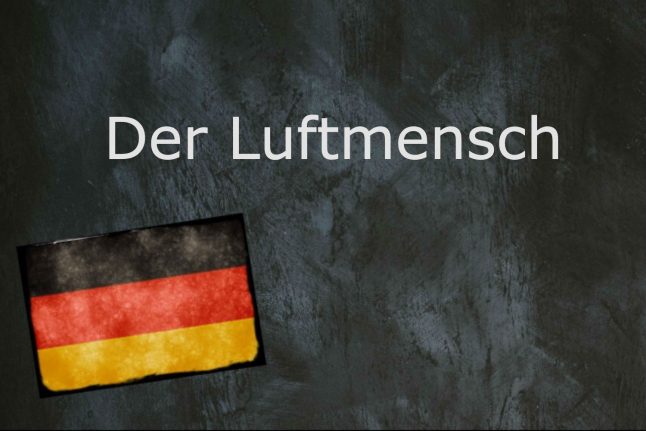 This compound German noun can be broken into “Luft” (air) and “Mensch” (person). This describes someone who is concerned with philosophical and intellectual pursuits, rather than practical matters.

A Luftmensch may be interested in art, music, and literature, and pay little attention to making money or success defined by capitalist and societal norms.

A Luftmensch is an impractical dreamer with improbable plans. She is a contemplative soul who may yearn for a different world.

This term is also associated with the German phrase, “von Luft und Liebe leben,” which means, “to live on love and air,” that is, to live without concern for pragmatism.

While no doubt used by German speakers, this term actually has Yiddish origins.

The Yiddish language originated in Central Europe in the 800s, and stems from German, Hebrew, Aramaic, as well as a mix of some Slavic languages. Spoken historically by the Ashkenazi Jewish community, it is still spoken today in many countries throughout Europe and among Jewish communities worldwide.

Like many Yiddish words, Luftmensch has been incorporated into the English language. According to Merriam-Webster, the term was first published in English in 1907 by writer Israel Zangwill, who was at the forefront of cultural Zionism.

Growing up in Brooklyn (long before I learned German) I often heard this word used to describe someone who had their head in the clouds.

This term was also used to describe veteran US presidential candidate Bernie Sanders, whose democratic socialist ideals were at first seen as a bit lofty and out of reach.

While perhaps seeming totally unrealistic at first, it is important not to discount the goals and dreams of a Luftmensch. Sanders’ political philosophies were initially discounted by mainstream politicians in 2016, yet in 2020, much of his progressive platform was embraced by President-elect Joe Biden.

You never know where the dreams and ideals of a Luftmensch may end up!