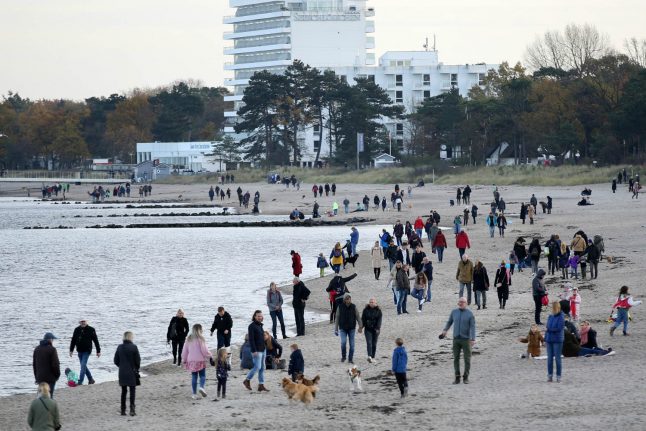 For the latest on the developing situation read our story HERE.

Despite the partial lockdown that came into effect a fortnight ago, the number of new coronavirus infections has been increasing.

Now a number of new measures are expected to be put in place at a meeting between Chancellor Angela Merkel and the state leaders on Monday.

For a recap of the current rules in place, read our story here.

Why does the government want to enforce tougher rules?

The draft document states that even though there are tentative signs of improvement, the Covid-19 situation is still critical.

“The course of events over the last few days gives reason to hope that the high exponential infection dynamic has been halted, but a decline in the number of new infections is not yet foreseeable,” says the draft document.

“Therefore, further efforts are needed to contain the infection rate”. Another meeting will take place on November 23rd, a week later.

What's in store for Germany?

Here are the plans:

RESTRICTIONS ON CONTACT: According to the government's plans, people in Germany should only be allowed to meet with members of their own household and a maximum of two people from another household.

Since November 2nd, residents in Germany can meet with members of their own household and one other household, with a maximum of 10 people.

“This is binding and violations of these contact restrictions will be sanctioned accordingly by the regulatory authorities,” the paper states. Groups of people celebrating in public places, in flats as well as in other private areas “are unacceptable in view of the serious situation in our country”.

PRIVATE MEETINGS: Despite the provisions already in place to prevent infection, the paper states that Covid-19 infections continue to happen “in private surroundings and outside public places”.

To reduce the risk, children and young people should be encouraged to meet only with one regular friend in their free time. Private meetings with friends and acquaintances should also generally be limited to a fixed additional household.

Private parties should be avoided completely until Christmas.

QUARANTINE AND SICK LEAVE: The federal government recommends that all people with cold symptoms, and especially those with coughs and colds, go into quarantine immediately at home.

“They should remain there for five to seven days until the symptoms subside,” the draft states. There, care should be taken to maintain a distance from other members of the household and especially from risk groups in the household. “Sick leave should be taken by telephone by the family doctor, initially without a presence visit to the practice.”

The doctor should also discuss with the patient if a coronavirus test should be taken.

SCHOOLS: As in the partial lockdown, schools are to be kept open in principle, although already a number have partially or fully closed after outbreaks.

To protect against infection, however, the measures could be tightened here as well, with a special focus on young people over 12. However, it emerged on Monday that a decision on schools will likely not be taken until the following week.

What could happen next week is that the government will make it compulsory for pupils of all age groups and teachers to wear a mouth and nose covering on school premises and during lessons.

This is not yet mandatory in all states. And, unless larger rooms are available, classes should be divided in half and taught in fixed groups. A minimum distance of 1.5 metres should also be in place in school buses. In the case of quarantine measures, distance learning should be offered for all pupils concerned.

PROTECTION FOR RISK GROUPS: According to the government's plans, particularly vulnerable people such as the elderly, the sick or those with pre-existing conditions will receive reduced-price FFP2 masks from December onward to protect against the virus.

In order to reduce the risk of infection, the government will make it possible to distribute 15 of these masks to this population group at its own expense, with a small contribution from those affected. This would result in one mask per winter week.

It is advised that visits to particularly vulnerable people should only be made if all family members are free of symptoms and have not been in a risk situation for a week.

VACCINATION CENTRES: States are required to get their vaccination centres and plans ready from December 15th onward so they can be operational at short notice. By the end of November, the states have to inform the federal government of the number of vaccinations planned per day.

TRACKING OF INFECTIONS: As it is often not possible to fully track contacts, in case of an outbreak in a specific cluster, such as a school or a company, measures such as forced quarantine should be applied even without a positive test result.

DIGITAL HELP: By the end of the year, new digital tools for recording infections in the authorities will be used much more widely. In addition, the Coronavirus Warning App will be continuously improved and will be offered with new features.

EVALUATION OF MEASURES: The meeting this Monday – two weeks after the November shudown came into force -– was initially intended only as an interim assessment. How to proceed from December until Christmas will be discussed next week. The paper proposes November 23rd as the next meeting date.

Are these measures set in stone?

No. They will be discussed on Monday, and everyone has to agree to them.

Mecklenburg-Western Pomerania's state premier Manuela Schwesig urged the federal and state governments to be patient. “It is only two weeks since the November safeguard measures came into force. I don't think much of hasty further closures or loosening up now,” the Social Democrat politician told the Redaktionsnetzwerk Deutschland (RND) on Monday.

“The winter ahead of us will still demand a lot from all of us,” said the Chancellor in her video podcast.

What's the latest on infections in Germany?

On Monday November 16th,10,824 new cases of infection were recorded within one day. This is a significant decrease from the previous Monday when 13,363 cases were reported by the Robert Koch Institute (RKI).

Keep in mind that the number of cases recorded is usually lower on Mondays, partly because less testing takes place at the weekend. There was a peak on Friday when 23,542 Covid-19 cases were reported.

Some more positive news: the number of active cases has fallen slightly by 2,138 to 273,580 – the first decrease since October 4th.

According to the RKI, a total of 801,327 people have been infected with Sars-CoV-2 throughout Germany since the beginning of the pandemic. The number of deaths in connection with the virus rose by 62 to a total of 12,547 by Monday. The RKI estimates that around 515,200 people have now recovered.

The 7-day incidence on Sunday was 143 cases in seven days per 100,000 inhabitants. The German government's aim is to reach an incidence of 50. At that number it is possible to trace individual contacts of people infected.