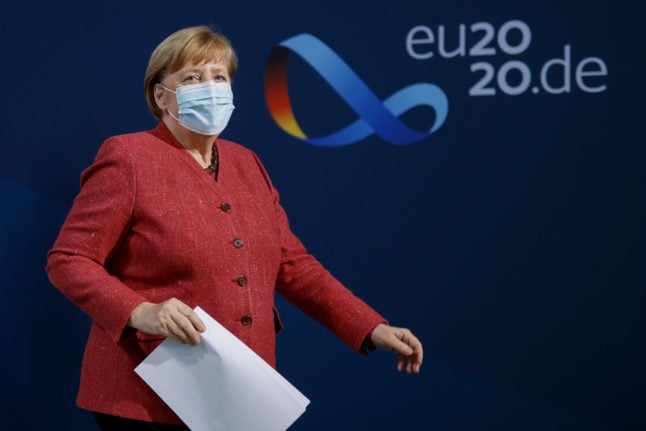 Angela Merkel after the meeting on Monday. Photo: DPA

Despite a government draft plan outlining a plan to tighten up anti-coronavirus measures in Germany, a majority of the premiers of the 16 states did not agree on all points at a meeting on Monday November 16th

Instead, they've made a strong appeal to residents in Germany to cut their social contacts further.

Here's an overview of what they discussed and what it all means.

READ ALSO: 'We still have a long way to go': Merkel fails in new curbs bid as Covid-19 infections stabilise

The government and states will focus on how the daily infection figures progress over the next week. The Chancellor and state leaders plan to meet next Wednesday, November 25th, to reassess the situation, decide if more measures are needed, and if they should be extended after November.

If the number of infected and seriously ill people has not fallen sharply by then, there could be further legally binding restrictions. “Today we sent a reminder, next week we will have to decide,” said Bavarian state premier Markus Söder of the Christian Social Union (CSU) after the discussions.

“Every contact that does not take place helps to fight the pandemic,” she said.

That means limiting contacts to an “absolute minimum” and socialising with just one other household, the final draft text agreed by the federal and regional governments states.

Here's what they decided on Monday November 16th:

PRIVATE MEETINGS: Private meetings with acquaintances, friends and relatives should be limited to “a fixed additional household”. This also applies to children and young people.

NO PARTIES: People in Germany should refrain from having parties, the government and states say.

CUT DOWN ON MOVEMENT: Citizens are urged to refrain from “unnecessary private trips and tourist day trips” and to busy public areas.

AVOID PUBLIC TRANSPORT: Residents are urged to refrain from non-essential visits to enclosed spaces and avoid public transport as much as possible.

SICK NOTES OVER THE PHONE: People with respiratory diseases (such as a cold or flu) are urged to stay at home. They should get a sick note from their doctor over the phone, rather than visit the surgery. They should check with their doctor whether a coronavirus test is needed.

TAKE CAUTION WITH VISITS: The government and states say that people should only make visits, particularly to the elderly and particularly vulnerable, if all family/household members are free from any symptoms of illness and have not been exposed to any particular risk in the days before.

PROTECTION FOR RISK GROUPS: Particularly vulnerable people are to receive 15 FFP2 masks at a reduced cost from December onwards to protect them from coronavirus. This would result in people receiving one mask per winter week. Details on the scheme are still to come.

VACCINES: The federal and state governments expect there to be at least one approved vaccine in the first quarter of next year. The federal states should ensure that their vaccination centres can start operating at short notice.

TRACK AND TRACE: As it is often not possible to fully trace contacts, measures such as quarantine orders should be put in place in case of cluster outbreaks – such as schools, companies or religious communities – even without a confirmed positive Covid-19 test result. Caution is the order of the day in this respect.

MOVE TO DIGITAL: Health authorities will make greater use of digital systems for contact tracing and the coronavirus tracing app will be more widely used in the future.

What will be decided next week?

Merkel and state leaders will decide next week on a longer term Covid-19 plan for the coming months, including December and January.

At the moment it is unclear whether the closure of hospitality, leisure and cultural facilities, originally limited to November, will be extended.

Merkel said that the shutdown measures had stopped the exponential growth, and that it was now necessary to discuss whether any facilities could be reopened on December 1st. “And if we are still too far away, we must take the appropriate measures,” she said.

Contact restrictions could also be tightened further in the coming week, depending on how the figures develop. If it were only up to the federal government, tougher rules on meetings would be introduced.

Another sticking point is schools. These are to remain open if possible, however, the federal government wants to push through stricter measures, such as halving class sizes and mask rules in classrooms.

After a united front at the end of October when the partial lockdown was agreed, disagreements between the government and states are surfacing again.

This has been evident throughout the crisis as state leaders fight for what they believe is best for their region, rather than towing the federal line.

The President of the Association of German Municipalities, Burkhard Jung, called on the federal government and states to stay focused in the pandemic strategy.

“For next week's conference, we would like to see more calm and better communication between the federal and state governments,” the Mayor of Leipzig told the newspapers of the Funke Media Group on Tuesday. “We need clarity and level-headedness so that we can deal with the corona pandemic as best we can this winter.”

Gerd Landsberg, head of the Association of Towns and Municipalities, defended the federal and state governments against criticism regarding lack of decision making on Monday.

“We have to wait and see how the infection rate develops in the next few days and whether it's possible to reduce the number of new infections,” Landsberg told the Redaktionsnetzwerk Deutschland (RND).

Meanwhile, Free Democrats Secretary General Volker Wissing called on Merkel to explain her coronavirus policy better. “The communication of the federal Chancellery seemed to be more about power tactics than the right measures to fight the pandemic,” Wissing told RND.