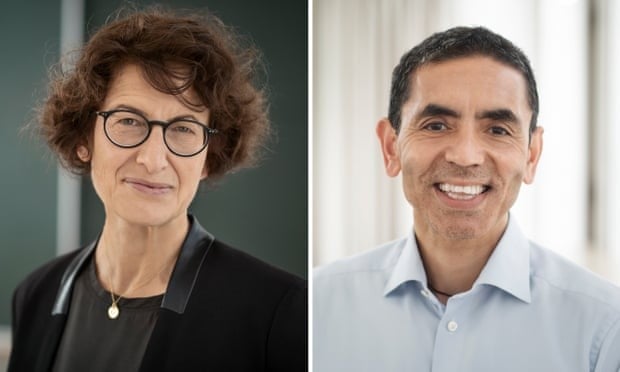 Ozlem Tureci (left) and her husband Ugur Sahin (right). Photo: Biontech
Ugur Sahin and his wife Ozlem Tureci founded BioNTech in the western German city of Mainz in 2008, and together with US giant Pfizer are developing the leading candidate in the worldwide chase for a vaccine.
The announcement on Monday that their vaccine was more than 90 percent effective in trials led news bulletins around the world and sent stock markets and hopes soaring.
BioNTech is now worth $25.8 billion (21.8 billion euros), more than Germany's largest lender Deutsche Bank.
Sahin, the chief executive, came to the country when he was four years old and his father got a job at a Ford plant in Cologne as a member of the “Gastarbeiter” (guest worker) generation of migrant workers, many of whom ended up staying in Germany.
Tureci, BioNTech's chief medical officer, is the daughter of a Turkish doctor who emigrated from Istanbul.
Described as hard-working and passionate, the pair appear to be wary of superlatives or the temptation to set up their journey as a model of successful integration.
“I am not sure I really want that,” Sahin told British newspaper The Guardian. “As a society we have to ask ourselves how we can give everyone a chance to contribute to society. I am an accidental example of someone with a migration background. I could have equally been German or Spanish.”
'Simply authentic'
Although the general public has only now discovered them, the two have long been known in the scientific community as leading figures in cancer research, with the self-declared goal of “revolutionising” cancer medicine.
Specialising in molecular medicine and immunology, Sahin, 55, first trained at the University of Cologne and then at Saarland University Hospital, where he crossed paths with medical student Tureci.
They married in 2002, even returning to the lab on the day of their wedding, and have a daughter.
Tureci has described her childhood as closely linked to medicine. “My father's practice was in the family home,” she once told a German science website, adding that she “could not imagine” any other job than that of a doctor.
Neither saw themselves managing a company, but their lines of research seemed “too daring” for the pharmaceutical industry to take notice, she told the Tagesspiegel daily.
They founded their first biotechnology company, Ganymed, in 2001, selling it in 2016, while their second, BioNTech, developed a new generation of individual therapies for cancer patients — based on the same technology now used in their coronavirus vaccine.
With some 1,500 employees today, it is supported by major private investors.
Two of them, Thomas Struengmann and Michael Motschmann, described the couple this week as “simply authentic people, with great integrity, hardworking and exceptionally intelligent”.
At BioNTech's headquarters in Mainz, on a street with the auspicious name “An der Goldgrube” (At the Goldmine), scientists work on a novel technology known as messenger RNA, which involves injecting strands of genes into the body that dictate to cells the defence mechanism to be manufactured against a disease.
BioNTech teams have since January put their work on cancer on hold, focussing their efforts on the fight against Covid-19, calling it project “Speed of Light”.
No vaccine based on this technology has yet been brought to market.
Having identified promising vaccine blueprints, the company formed a partnership in March with American pharmaceutical giant Pfizer.
With their vaccine breakthrough, Sahin and Tureci have made it into the top 100 of Germany's richest people.
But when the couple learned of the encouraging results of their late-stage vaccine trial, they told The Guardian of their relief and how they “celebrated a little”, before settling down to “cups of tea”.