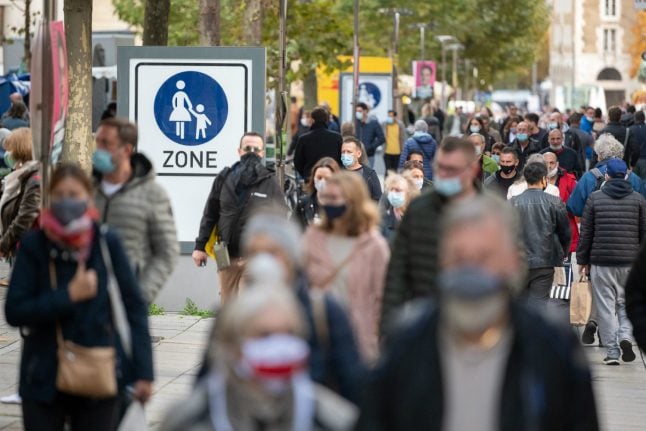 People walking in Stuttgart in October. Experts say it will take some time for the whole population to become immune to Covid-19 through past illness or vaccination. Photo: DPA

The agreement could see Europe secure 200 million doses of a new promising coronavirus vaccine being developed by Mainz-based BioNTech and US pharma giant Pfizer.

“Negotiations with the pharmaceutical industry have been concluded,” European Commission circles confirmed to DPA in Brussels on Tuesday. “The contract is in the bag.”

It is set to be approved on Wednesday by the Commission.

Does that mean the pandemic is coming to an end?

Not quite. But there is a light at the end of the tunnel, according to Germany's Health Minister Jens Spahn.

Europe has overcome a crucial hurdle on the way to the first coronavirus vaccine, said German daily Welt on Tuesday. It means that – all going well – the vaccine should be available to people across Europe as soon as it is approved.

What does Germany want?

Germany wants to receive up to 100 million doses. This was the federal government's starting point in the EU talks, Spahn, of the Christian Democrats (CDU), said in Berlin on Tuesday.

Once the contract has been concluded, all 27 EU countries will have access to first deliveries at the same time. They will be distributed according to population size. Germany has a share of about 19 percent.

The EU Commission has been negotiating with BioNTech and Pfizer for months. After preliminary talks, the authority had declared in September that it wanted to purchase up to 300 million vaccine doses from the manufacturers. However, a framework agreement had not yet been concluded – unlike with three other vaccine manufacturers. How fast is the process?

Spahn expects there to be speedy approval process. This means that not all data will be collected first and then submitted to the authorities after the end of the registration trial, as is usually the case.

This time, the data will be exchanged directly. Both a US and a European approval could be granted very quickly. Spahn assured the public, however, that there would be no reduction in the quality and safety standards.

As an attractive pharmaceutical market, Germany, like other large EU countries, could have concluded a contract with the companies on its own, said Spahn.

But France, Italy and the Netherlands had strongly advocated that the Commission should undertake the process for all EU countries. Otherwise smaller states would have been at a disadvantage.

“This is sometimes a bit more laborious, but in the end, if we stand together, we are stronger together,” said Spahn.

Who will get the vaccine first in Germany?

Spahn announced there will be a major information campaign in Germany when there is an approved coronavirus vaccination. Authorities will also aim to explain “why we are prioritising and who will be vaccinated first”.

First in line to be vaccinated against Covid-19 will be older people, those with pre-existing conditions, health and care workers, police officers, firefighters, teachers and educators. This was recommended by the German Ethics Council, the Leopoldina Academy of Science and the Standing Vaccination Committee.

Spahn has previously said that up to 40 percent of residents in Germany belonged to a risk group.

Information will also be provided to the public on how the vaccine is administered, as well as the possible risks or side effects.

Two doses of vaccine per person would be necessary for immunisation, meaning that large amounts will have to be produced.

Other members of the public will only be vaccinated after the priority groups.

When will the first people in Germany receive it?

Health Minister Spahn is optimistic. There's a “very high probability” that the first vaccinations will take place in the first quarter of 2021,” he said.

“This is light at the end of the tunnel,” Spahn added: “This gives me, and I wish for all citizens, strength – even for the months that are difficult – to know that there is at least a good chance that next autumn and winter will be much better than this one.”

This prospect should also encourage people “to take special care of each other this winter and to stick to the rules”, he said.

Federal Research Minister Anja Karliczek, of the CDU, is counting on large-scale production of the vaccine.

“It will now be important to produce the vaccine as quickly and in large quantities as possible,” Karliczek told DPA.

Social Democrat (SPD) health expert Karl Lauterbach said on Monday to broadcaster ARD that there were still many unanswered questions, such as whether people who had been vaccinated could be infected with coronavirus again or be contagious to others. A sign telling people to wear masks in the central zone of Erfurt, Thuringia. Photo: DPA

Meanwhile, according to Lauterbach, it will take at least a year before the whole of Germany is vaccinated to reach “herd immunity”.

It's only after this time that there can be a discussion about not wearing face coverings or socially distancing, he said.

Chancellor Angela Merkel said at the weekend that the central task is to make the population as a whole immune to the virus. If 60 to 70 percent of the population is immune – through vaccination or a past illness – the virus is “more or less defeated”.

What's the latest on the potential vaccine?

BioNTech and Pfizer said on Monday that initial results from their trial found it to provide 90 percent protection.

Scientists say they haven't found any safety concerns in their trials, although tests are continuing. BioNTech said immunisation could “last for at least a year” but we don't know this for sure yet as not enough time has passed.

An application for approval, initially in the US, is expected to be filed next week at the earliest.

Will it be mandatory?

No. The vaccination will be voluntary. Surveys suggest the majority of Germans are willing to get vaccinated although anti-vaccination campaigners and conspiracy theorists have railed heavily against any potential Covid vaccine.