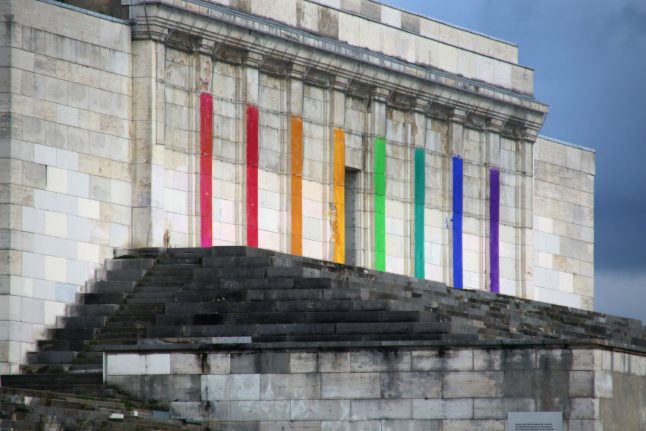 The stone grandstand of the former rally grounds in October 2020, painted as a symbol against racism. Photo: DPA

When Nazi ruins begin to crumble, is it better for Germany to rip them down or restore them?

That is the question now facing Nuremberg, site of the infamous vast marching grounds and torchlit parades immortalised by filmmaker Leni Riefenstahl.

As it prepares to mark the 75th anniversary of the post-war trials of Adolf Hitler's top henchmen, the city has opted to throw itself into a massive conservation effort tied to Germany's vaunted culture of remembrance and atonement for past crimes.

“This is where it all began: the destruction, the exclusion and in the end, the Holocaust” in which the Nazis slaughtered six million European Jews, Julia Lehner, the southern city's chief culture official, told AFP.

Touring the sweeping Nazi party rally grounds, Lehner pointed out the massive Zeppelin grandstand where Hitler from 1933 to 1938 delivered racist tirades to half a million party faithful who gathered there every September.

Tens of thousands more Germans from across the country joined in to witness the giant dance spectacles and colour guards.

Nearby, another ruin looms.

The classical Congress Hall, never completed, is the second largest Nazi-era building still standing, after the Prora recreation complex on the Baltic Sea.

Its “monumentality” was intended, like so many architectural relics from the era, to “intimidate and fascinate” while “demonstrating the superiority of Nazi ideology”, historian Wolfgang Benz told AFP.

She recalled that Hitler handpicked Nuremberg as the staging ground for his sophisticated propaganda machine.

That was one of the prime reasons the Allies chose the city for the groundbreaking hearings to prosecute top Nazis from November 1945.

The dark heritage weighed on the city for decades.

“Immediately after the war, it was preferred to cover it all with a veil of forgetting,” Lehner said.

Zeppelin Field with its stone bleachers opposite the grandstand were long used as sporting grounds for US soldiers and later rock concerts by the likes of Bob Dylan.

Today what remains — officially listed as a historical monument — is in a state of dangerous disrepair. A stone bleacher photographed in 2019 in Zeppelin Field. Photo: DPA

Many of the familiar landmarks are inaccessible due to the risk of crumbling edifices injuring visitors.

The Congress Hall is closed to the public too. Its ground floor acts as a warehouse for the small huts that make up Nuremberg's world-famous Christmas market, while an annex is used for storage by the Philharmonic Orchestra.

Since 2001, a documentation centre on the sidelines of the grounds serves to provide historical context.

After two decades of often bitter debate, Nuremberg decided to restore the site by 2025, with the €85-million cost shared by the city, the state of Bavaria and the federal government.

The sum will first and foremost serve to prevent further structural erosion of the buildings.

The field will be converted into a park and signs will explain the history and significance of each building.

The documentation centre, which welcomes 300,000 visitors a year, will be expanded.

It's about “making the stones speak”, Lehner said, “by telling their history and always insisting that cannot be allowed to happen again”.

The Congress Hall is slated to eventually become a home to artists' studios.

“It's a good basis for showing people from around the world and young people… about the totalitarian ideology these buildings incarnate,” its president, Jo-Achim Hamburger, told AFP.

As Germany confronts a resurgence of anti-Semitism and the far right openly challenges the country's post-war practice of atonement, such vestiges of the past have a key role to play, preservation advocates argue.

Not everything was suited for conservation.

“The conflict is always the same: could a site become a shrine for neo-Nazis? If the answer is yes, you have to destroy it,” said Benz, citing Hitler's bunker in Berlin which was paved over and since 2006, marked with a sign.

Nuremberg's party rally grounds faced similar questions but only the giant swastika above the grandstand was demolished by the Americans — the right decision, said Florian Dierl, director of the documentation centre.

After all, he said, part of remembrance culture when it comes to the Nazi period is about understanding why “the Germans remained true to the regime all those years”.

“By coming here, you can get an idea of the attraction that the notion of a National Socialist community had on the population,” he said.

The massive stones also continue to serve as a warning.

“If you destroy that history, you might lose the chance to truly make visible the dangers of totalitarianism,” Hamburger said.

In 2014, Holocaust survivor Leon Weintraub made a similar plea on a visit to Nuremberg.

“I feel a special satisfaction standing in the face of this expression of megalomania,” he said. “I don't feel like a victim, I feel like a winner.”