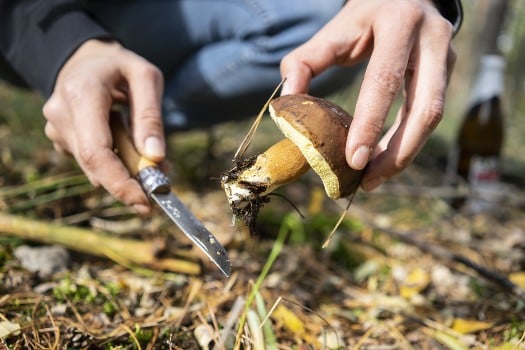 Autumn is the time of year that the best edible mushrooms protrude through the leafy undergrowth of forests. While in some cultures, wild mushrooms are barely touched due to fear of poisoning, many Germans can distinguish between a Kräuterseitling (edible) and a kahler Krempling (poisonous).

The German appetite for Waldpilze is so enormous that the tastiest varieties have become ever rarer in recent years. This has led to strict rules on how much one can pick. A bit like with marijuana, it is only legal to gather in quantities that can be justified for personal use.

READ ALSO: Eight of the tastiest German foods for autumn

Some are so obsessed with the earthy taste and health benefits of the fungi, that even hefty fines don't stop them. Police on the Swiss border stopped one Swiss man last month as he tried to smuggle three kilograms of precious Steinpilze back into his homeland.

The customs guards warned him that Germany only allows a maximum harvest of one kilogram per person per day. He was forced to give up two thirds of his haul and pay a €200 fine.

Meanwhile a forester near Cologne has complained that mushroom hunters are becoming ever more aggressive when he tries to stop them from gathering too many Pilze.

“One punched me in the face. I’m genuinely scared of them,” he told his local newspaper. A wide pan is recommended so that mushrooms really sizzle. Photo: DPA

During the months of autumn supermarkets also fill up their shelves with wild mushrooms. But these delicacies do not actually come from German forests. Nature protection laws ban picking mushrooms for profit.

The mushrooms in the supermarket come from eastern Europe. Mushroom specialists warn that these have likely been sprayed with chemicals so that they last the journey.

One of the most popular Waldpilze is the wonderfully named Pfifferling, which is yellowy-orange in colour and can be identified by the ribs on its underside. The name comes from the slightly peppery taste, which is particularly pronounced when they are raw.

Another favourite, but which is much harder to find is the Steinpilz. This member of the boletus family is considered by those in the know to be the king of the mushroom world. Much like during the springtime obsession with Spargel (asparagus), many restaurants dedicated their menu to the Steinpliz during the autumn months.

True too is that every experienced mushroomer has their own secret spots, and they are unlikely to want to share their knowledge with strangers. Experts say that edible mushrooms can be found in most forests if there has been enough rain in the preceding weeks. Beginners are encouraged to start by picking boletus, which are easy to identify by the spongey-ness of their underside of which there are few poisonous varieties native to Germany.

But it is very important to note that inexperienced mushroomers should always get their haul checked out by a specialist before eating them. Deadly mushrooms often look a lot like edible ones to the untrained eye.

Germany provides help here. Enthusiasts can go through training to become a Pilzsachverständige (mushroom expert). Obtaining a licence as a mushroom expert isn’t easy: you have to be able to identify dozens of species through careful examination.

But once you have passed the exam you might even be consulted by clinics when someone has mistakenly eaten a poisonous mushroom.

In many towns, mushrooms specialist set up stall in the market square a couple of times a week. You can bring your fungi to them and they will tell you whether its safe to eat.

Beloved traditional recipes include adding wild mushrooms to a Rindergulasch (beef stew), putting them in a creamy sauce as a side dish to red meat, or stacking them on toast after sauteeing them in butter and parsley.