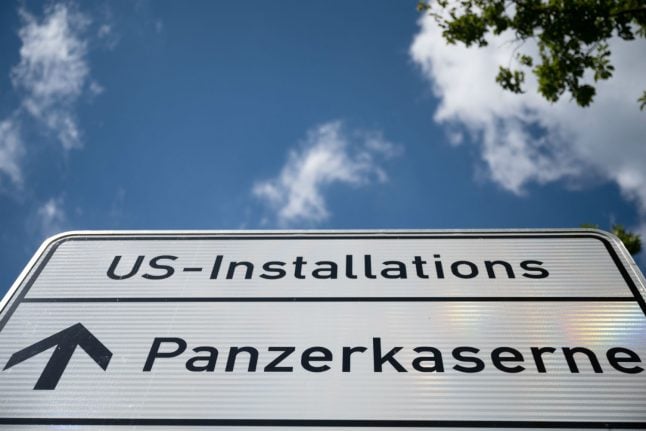 A sign directing drivers to a US military base near Stuttgart in July. Photo: DPA

The planned withdrawal of about 12,000 troops has not yet started, more than four months after the announcement made by US President Donald Trump that the removal would start as soon as possible.

The Stuttgart-based command center for the US armed forces in Europe (called Eucom) replied to DPA’s request for comment by saying that the preparations for such a move require more time.

“Planning takes place at the highest levels and takes numerous considerations into account. This will take some time,” it said in a written answer. The soldiers are to be kept up to date about the plans. “At this moment in time we have no further details to offer and cannot speculate about schedules.”

The coordinator of the Federal Government of Germany for transatlantic relations, Peter Beyer of Chancellor Angela Merkel’s Christian Democrats (CDU), confirmed that the mass troop-withdrawal has not yet begun.

“The US Army in Germany has, to my knowledge, still not received any concrete instructions concerning detailed implementation of the troop-withdrawal,” Beyer said DPA.

Troop removal 'as soon as possible'

It was originally expected that at least the first soldiers would be removed before the US Presidential election on Tuesday, November 3rd. When Trump announced the removal on June 15th, he argued that Germany does not pay enough for defense spending.

Six weeks later, Trump’s Defence Secretary Mark Esper provided details on the troop withdrawal, and made it clear that the plan should be implemented “as soon as possible.” The first soldiers, according to Esper, could be expected to leave within weeks. It has now turned into months, and the process has yet to begin.

About 12,000 of the 36,000 soldiers stationed in Germany are to be withdrawn. Roughly half are to be brought back to the US, while 5,600 are to be transferred to other NATO countries. Three stations in Baden-Württemberg, Bavaria, and Rheinland-Palatinate are hit especially hard. US troops visiting a military museum in Dresden in 2017. Photo: DPA

Both of the Stuttgart-based command centers for U.S. Troops in Europe and Africa are to be transferred from the capital of Baden-Württemberg to Mons, Belgium.

A total of 4,500 soldiers will return home to the US from a large military training area from the Oberpfalz region of Bavaria.

A squadron with about twenty F16 fighter jets including crew, mechanics, and support staff is to be relocated from the air force base in Eifel, Rheinland-Palatinate to Italy.

In Berlin it was originally expected that the first steps of the troop withdrawal would take place before the election. However from the start the German federal government was barely included in the planning by the U.S. allies.

Last week, Alexander Neu, a member of parliament representing Die Linke (The Left) asked the Defense Ministry whether they were aware if troop relocations had already taken place, or if they were planned for the next few months.

The Defense Ministry responded curtly with a short response: “The federal government has no relevant findings.”

Could the decision to remove troops be reversed?

Even if there is indeed a rough or specific schedule for the first steps of the withdrawal, it would be easily thrown overboard depending on the outcome of the presidential election.

This is what the German government is now hoping for, in the event that Trump loses the election.

“I see a definitive chance that this decision will be revised if Biden is President,” said representative of the Christian Democratic Party/Christian Social Union parliamentary faction, Johann Wadephul.

He points to the considerable resistance against the withdrawal plans present across party lines in the US Senate, not only among Democrats. Republican Senator Mitt Romney, called Trump’s plan a “grave error,” and added further, “It is a slap in the face to a friend and ally.”

The US Military views the plan skeptically. The former commander of US troops in Europe, Ben Hodges, called it a “colossal mistake.” Hodges believes that the decision was purely politically motivated and followed no strategy.

Transatlantic-coordinator Beyer still believes that the plans will be completely scaled back, even if Trump is defeated.

“I am convinced that this topic will remain, even if Biden wins the election,” he said. “Biden would also not completely stop the reduction in troops.”