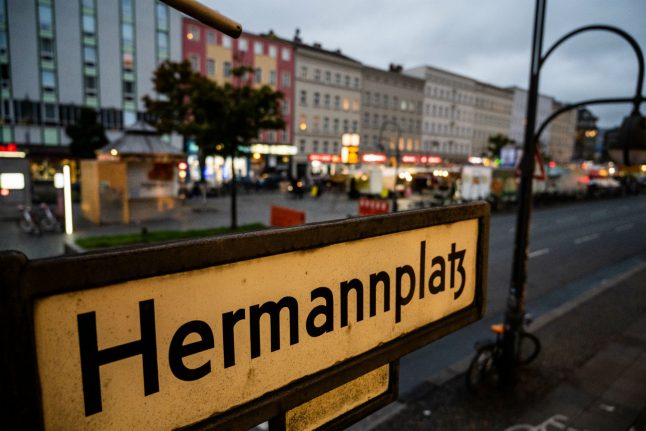 One of the main streets in Berlin-Neukölln. Photo: DPA

Inspectors are looking into a YouTuber who police suspect of “leading an acquaintance dressed in a wig and a Macron mask through the district of Neukölln a leash, while wearing a kaftan, and insulting him and pretending to beat him”.

It was not clear if any crime had been committed, but Germany has laws prohibiting incitement to hatred or violence.

The stunt on Saturday came amid a wave of protests in Muslim countries in recent days over Macron's defence of the right to publish cartoons of the Prophet Mohammed.

Video footage carried by German media shows the incident at a busy street in the southern Berlin district.

The man holding the rope can be seen shouting in Arabic and brandishing a belt, followed by a crowd of about 20 people.

The Tagesspiegel newspaper identified the YouTuber as Fayez Kanfash, a 20-something Syrian who has been living in Berlin for several years.

It remains unclear whether the action was intended as a protest or as satire.

The French president has defended France's freedom of speech laws in the wake of the October 16th killing of teacher Samuel Paty by a suspected Islamist radical.

Paty had shown a cartoon of the Muslim prophet to his class for a lesson on freedom of expression.

Islam forbids any depictions of Mohammed.

Tensions were heightened further last week when three people were knifed to death in a church in the southern city of Nice in another attack the government called an act of “Islamist” terror.

More than 50,000 people took part Monday in the biggest demonstration yet in Bangladesh, carrying effigies of Macron, caricatures and a fake coffin for the French president.

In Berlin, about 60 members of a Muslim group staged a protest on Friday in front of the Brandenburg Gate and the nearby French Embassy, local media reported.

Authorities called on schools across Germany to join those in France in observing a minute of silence on Monday morning to remember teacher Paty.