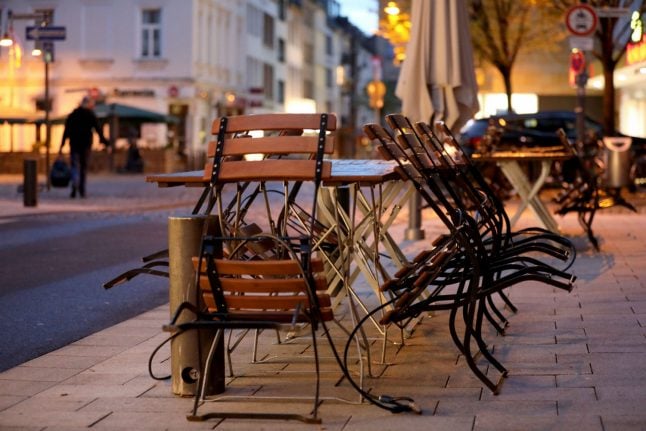 A restaurant in Cologne with stacked chairs as the shutdown began on Monday. Photo: DPA

On Monday, the Robert Koch Institute (RKI) for disease control reported a drop in the number of cases, with just over 12,000 new infections within a day. However, the figure is often lower on Mondays as not all health authorities report their cases at weekends.

On Saturday, Germany recorded a record number of new infections, with more than 19,000 cases within 24 hours.

In an interview with public broadcaster ZDF on Sunday, German Health Minister Jens Spahn said the country was facing the “situation of the century” and said a”national effort in November” is needed.

Spahn urged people to follow the new restrictions. He also said further tough measures may be needed after the shutdown.

“Nobody can rule out the possibility that it will not happen again sometime in the future,” the Christian Democrat (CDU) politician said.

Last week after the government and state leaders agreed on the tough new restrictions, Chancellor Angela Merkel spoke of a difficult winter ahead with “four long, hard months”.

READ ALSO: How many people can I meet during Germany's shutdown?

What are the rules?

The shutdown is not as strict as the one that took place in spring.

Nationwide, hospitality, cultural and leisure facilities are largely prohibited from opening their doors from November 2nd to November 30th.

Stricter rules also apply to personal meetings, although Germans are not confined to their homes. Only two households are allowed to meet in public (with a max of 10 people at the meeting)  – in some states (including Bavaria) this rule applies explicitly to meetings in your own home.

“Groups of people celebrating in public places, in apartments as well as private areas are unacceptable in view of the serious situation in our country,” said the resolution agreed between Merkel and state leaders.

Unlike in spring, daycare centres (Kitas), schools and shops will generally remain open this time.

Restaurants, cafes, bars and pubs have to close, but they are allowed to sell food and drinks to take away.

In general, people should refrain from travelling and avoid any trips that are not absolutely necessary.

Germany's 16 states are implementing the restrictions by decree, so there may be some slight regional differences.

It came as hospitals in Germany said they were expecting a new record number of intensive care patients, highlighting the pressure on the health care system.

State and federal leaders will meet again in around 10 days to assess if the new measures need to be tightened further still or whether they may be eased in December.

There are major concerns in the hospitality, events and culture industries which are being hit hardest in the crisis.

A government package of up to €10 billion is intended to help businesses and the self-employed who are now unable to make a living in November. Nevertheless, lawyers say there will be legal action lodged against the government by businesses.

READ ALSO: Around Europe: The relentless resurgence of coronavirus causes unease and despair

“The alternative would be to let it run its course,” the Christian Social Union (CSU) leader said on Sunday on broadcaster ARD.

But that would mean an enormous increase in infections and a build-up of patients in hospitals, leading ultimately to higher death rates, he said.

“There is no other concept in the whole world other than reducing contacts in order to react to corona,” said Söder. “If there was a better, lighter one, we would apply it immediately.” He added that the current partial lockdown is not as tough as in spring and compared to other European countries, such as France.


Merkel's chief of staff Helge Braun said he did not think the rules would be relaxed any time soon.

“I do not think it likely that we will be able to relax measures in a fortnight' time,” the CDU politician said on ARD. But he was hopeful that the restrictions would work.

“I firmly believe that the measures we have now decided on will really put a significant brake on the infection rate.”

The ongoing tightening of virus rules and restrictions has sparked anger in people weary of confinement and the painful economic costs.

That frustration has led to protests in many parts of the world, including in Germany.

Merkel last week warned that propaganda and conspiracy theories undermine the fight against the pandemic.