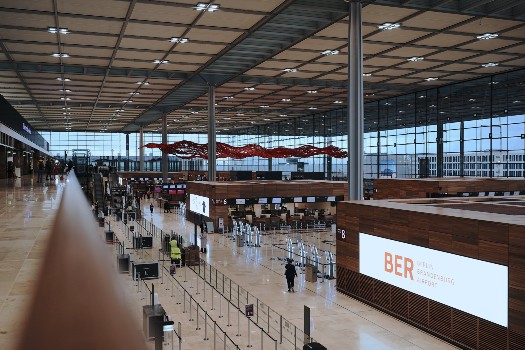 The first flights operated by low-cost pioneer EasyJet and German national carrier Lufthansa touched down at Berlin Brandenburg Airport (BER) around 2:00 pm (1300 GMT) after flying in from nearby Tegel Airport and Munich respectively.

Many Germans had almost given up on the airport after years of delays and spiralling costs which saw the facility finally open nine years late.

When it did, there was little fanfare given the deep crisis the aviation industry is going through amid the global coronavirus pandemic which has decimated travel demand.

As a result, “We will simply open, we will not have a party,” Engelbert Luetke Daldrup, president of the airport's management company, had said beforehand.

Edging further away from any feeling of celebration, climate demonstrators marched on the building to show their opposition to the new facility. Some brandished a banner reading “BER?: Take off! A crash flight into the climate crisis.”

The new airport was meant to celebrate German reunification but became mired in years of delays, scandals and false steps, as well as the added complications wrought by Covid-19.

It is designed to replace ageing Tegel, along with Schoenefeld, which is next door.

The opening is nonetheless a watershed moment for the project, intended as a symbol of German unity and engineering prowess after the country came together after being divided for nearly half a century. Economy Minister Peter Altmaier spoke Friday of his “joy and happiness” at the airport finally being able to open.

“It weighed on all of us that there were no prospects of (the airport) getting up and running for many years,” he said. “We are obviously glad that it is now possible.”

Since construction began in 2006, the project has been dogged by one failure after another that turned it into a financial black hole and a national laughing stock.

The airport, located in the southeast corner of the capital, was originally due to open in 2011. It now begins operations in the middle of the worst aviation crisis ever, thanks to Covid-19 restrictions which continue to suffocate air travel and are forecast to do so for many months to come. There's also the climate crisis. The pressure group Extinction Rebellion organised acts of “civil disobedience” to mark their opposition to the new facility as they protest aviation's impact on global warming.

Wood panelling and chrome give the interior of Terminal 1 a 1990s feel, with the “Magic Carpet”, a huge, bright red artwork by American artist Pae White suspended from the ceiling, adding a touch of colour.

The airport, Germany's third-largest after Frankfurt and Munich, has been designed to welcome 27 million passengers a year, but in November it will likely see only 20 percent of usual air traffic owing to the pandemic.

About 15 shops and restaurants out of just over 100 will remain shut, while the rest will keep “limited opening hours” because of low traffic, a spokesman told AFP.

None of this is good news for BER, initially projected to cost 1.7 billion euros ($2 billion) but already beyond the 6.5-billion-euro mark.    The airport has been granted 300 million euros in state aid to help safeguard jobs until the end of 2020.

But the health crisis has nonetheless already affected employment: In late July, Berlin's airports announced the loss of 400 jobs from a total of 2,100. Luetke Daldrup hopes the situation will improve in the first half of next year.

But the International Air Transport Association (IATA) does not expect global air traffic to reach pre-crisis levels until 2024.

The first passenger plane to take off from BER is slated to be an EasyJet flight to London Gatwick, departing at 6:45 am on November 1.

Tegel, beloved by many Berliners for its unconventional hexagonal design and ease of access, is to welcome its final flight on November 8.