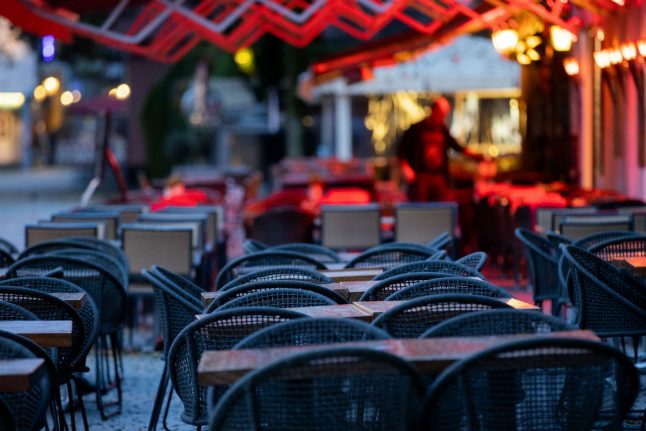 A man sets up his restaurant in the centre of Cologne on Friday morning, one of the last days it can remain open.
The German economy grew by 8.2 percent in the third quarter and is expected to shrink less than expected in 2020, official data showed Friday, even as the country faces new shutdowns to contain a second coronavirus wave.
Federal statistics agency Destatis said the rebound in July to September, coming after a historic slump in the second quarter, was driven by “higher final consumption expenditure of households, higher capital formation in machinery and equipment and a sharp increase in exports”.

Analysts from financial information service Factset had predicted an increase in gross domestic product of 7.4 percent after a plunge of almost 10 percent during the second quarter.

Its estimate of 4.4 percent growth for 2021 remains unchanged.

“The recovery comes as we are seeing a worsening of the pandemic, but I am sure that with the tough and decisive measures we have taken… we have a real chance to achieve this growth,” Altmaier said.

Germany, like the rest of the continent, has in recent weeks been engulfed by a second wave of Covid-19, with ECB chief Christine Lagarde noting that recovery in the single currency zone was “losing momentum more rapidly than expected”.

Having been praised for its handling of the first wave of the pandemic in the spring, the country is now regularly reporting more than 10,000 new cases a day and saw a peak of 18,600 on Friday.

The country's cultural, leisure, as well as food and drink sectors have been ordered to close from Monday to the end of November, in a new round of shutdowns that industries have warned could lead to a raft of bankruptcies.

To reflect the pandemic situation, the government has revised downwards its prediction for growth in the fourth quarter from 1.1 to 0.4 percent.

But Altmaier said he was optimistic that the impact of the shutdowns would not be as great as it was earlier in the year.

“The economy is much better prepared for the pandemic and for the need to control it in the autumn than it was in spring,” he said.

Europe's supply chains are also unaffected this time around, with EU borders staying open, he added. A sign on Friday in front of Madame Tussauds wax museum in Berlin advising guests to wear a mask and keep their distance. Photo: DPA

'We will go bankrupt'

Restrictions to come in force in Germany from Monday will keep restaurants and bars closed.

Hotel stays will be allowed only for “necessary and expressly non-tourism purposes”. Schools, daycare centres and shops will remain open, however.

Fears of a rise in unemployment are growing, despite an encouraging figure of 6.2 percent for October.

The KfW public investment bank has predicted that more than a million jobs could be lost this year in small- and medium-sized enterprises.

Many blue-chip German businesses have also announced sweeping job cuts, including 30,000 at flagship airline Lufthansa, 8,000 at tour operator TUI and 6,000 at carmaker BMW.

READ ALSO: 'Harder than ever': Germany's Lufthansa says 30,000 jobs at risk over pandemic

In the hospitality sector, professional associations are warning that up to a third of hotels and restaurants could be forced to close their doors for good by the end of the year.

“Over the last eight months, our turnover has plunged between 90 and 100 percent,” said Cordula Weidenbach, whose company rents out furniture for trade fairs in Munich.

“If this continues, we will go bankrupt.”

Berlin has pledged an extra €10 billion in aid for businesses affected by the November shutdown.

Companies will be compensated for up to 75 percent of their turnover during the weeks they are forced to close, whereas previous aid could only be used to cover fixed costs such as rent and utility bills.

The government has also already extended its “Kurzarbeit” short-time working scheme for a total of 24 months.

“There is unfortunately still no evidence that you can simply turn on and off an economy like a light switch without causing more structural damage,” said Carsten Brzeski of the ING bank, warning that “a double-dip looks unavoidable”.