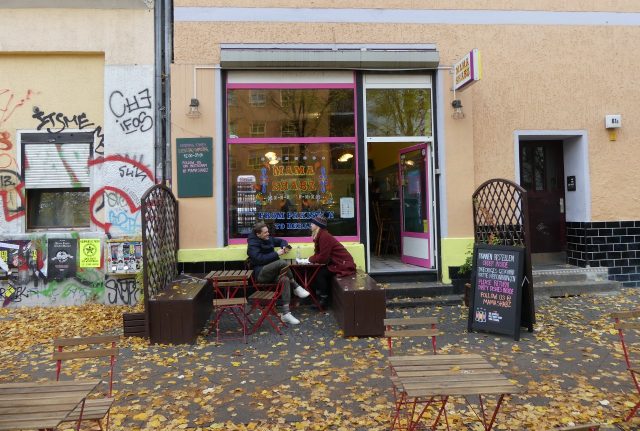 “Speaking just from my own experience, it doesn't make any sense,” said Lode van Zuylen, who runs the upmarket Lode & Stijn restaurant in Berlin's Kreuzberg district.

Zuylen said that his restaurant had taken their duty to create safe spaces “very seriously,” adding that “we have lost so much money and so many opportunities.”

While stressing that he understood why the government needed to restrict people's movement, he said his customers had always been careful to obey the rules.

“In all of these months we haven't once had contact from a customer or a health authority to warn us about an infection,” he said.

The proposed government aid – reportedly 70 percent of last November's earnings – was “a lot of money” which “would help reduce the levels of stress I'm going to feel over the coming weeks,” he added.

Frustration was was also expressed by a woman who manages several bars in the capital, but who wished to remain anonymous.

“We have been bending over backwards and jumping through hoops over the last months to keep on top of every new regulation – and there’s been changes every single week,” she said.

“We were all working really hard to keep on top of this, treat it really seriously and create a safe space in all our bars.

“To have done all that and be told: the bars and restaurants have to close – it’s just really frustrating and really disappointing. They say it’s for a month. I don’t know, I’m taking that with a pinch of salt.”

The heads of several associations in the gastronomy sector have rung the alarm bell since Angela Merkel announced a lockdown of bars, restaurants and hotels on Wednesday.

“A third of our 245,000 members will not be able to survive the winter due to the second lockdown,” warned Dehoga head Ingrid Hartges. “Without a comprehensive compensation package they face bankruptcy.”

The government has promised a fund of €10 billion to help affected industries survive the closure.

“That is a big level of support and we hope that all companies will be able to withstand the next month,” said finance minister Olaf Scholz. Workers in the gastronomy sector protest in Hanover in June. Photo: DPA

Guido Zeitler, head of the NGG union which represents workers in the hospitality industry stressed that the money needed to “come quickly and be substantial” if the sector was to avoid a “fatal blow.”

After reports emerged on Thursday that the Robert Koch Institute (RKI) advised Merkel and state leaders on Wednesday that there was little evidence that restaurants and hotels were contributing to the spread of the virus, opposition politicians called for the sector to fight the lockdown in court.

“When the government agrees on measures that have already been overturned by the courts, such as banning hotel stays, they are deliberately ignoring the rule of law,  said Wolfgang Kubicki, deputy chair of the Bundestag and a member of the Free Democrats.

“I call on all those concerned to take legal action against these measures,” he said.

David Chien, who manages the Mama Shabz restaurant in Kreuzberg, told the Local that he had no complaints with the way the government had acted.

“Of course it's shit, but the way things are going, it was necessary for them to do something,” said Chien, who is from South Africa.

“Our gripe isn't with the government, it is with all the people who didn't stick to the rules and brought us into this situation.” He said that getting people to stick to the rules had been a constant problem in his small establishment.

“We'll have to wait and see,” Chien said of whether the government aid would be enough to ensure his restaurant's survival. “It will help to pay the rent and that is better than in countries like the UK and South Africa.”

Customers at the restaurant also showed understanding for the new lockdown.

“My heart goes out to the restaurant owners, but the numbers show that hard action is necessary,” said Roswell, a Berlin resident originally from the Caribbean, who was eating lunch at Mama Shabz on Thursday.

He added that even if there is little evidence that restaurants are adding to the spread of the virus “they put people in the mood to go out and have contact with one another.”

Sitting across from him, Marli, from Germany, said that she would be happy for the lockdown to be extended over Christmas.

“I think it’d be better if they ban Christmas as well. I don’t mind seeing my family in the summer,” she said.

Sitting outside his tattoo parlour in the Kreuzberg district of Berlin, Padde says that he “saw the lockdown coming” but understands why the government decided to do it.

Starting next Monday, tattoo studios will also be banned from operating for four weeks.

Padde, a Hamburg native, told the Local that with a four-week lockdown “there is already light at the end of the tunnel”.

“We saw it coming,” says Padde, who manages the Black Fisk tattoo studio. “And in a fact it is unavoidable. It is a bit unfair that hairdressers don’t have to close, but we understand.”

Business has been slow ever since the pandemic started, he says.

“Our dedicated customers keep coming, but we made our money on tourists who would come in and ask for an Ampelmännchen (Berlin's famous traffic light man) or a Berlin bear tattoo. But they've been staying away since it all started.”

He said, though, that the financial aid he had received from the government during the first lockdown made him confident that he could survive the second one.

Tattoos studios are in a somewhat luxurious position. The artists who work there are self-employed, meaning the studio just needs to worry about rent and other smaller overheads.

“We won’t have a problem paying our rent. The most important thing is to take a break until things are safe again,” Padde said.