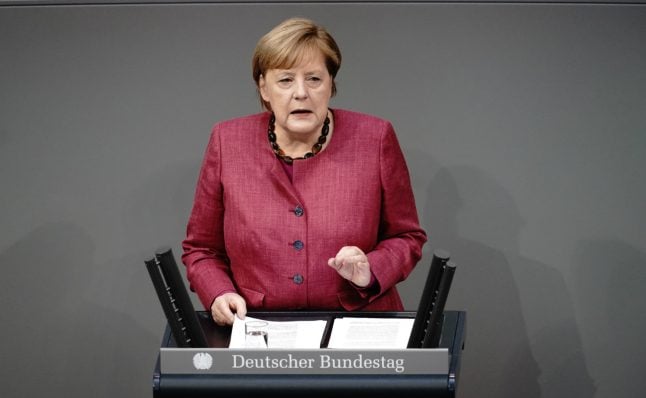 The popular Merkel called on Germans to rally behind her in respecting the restrictions, and to reject those who refused to follow the established science in combatting the spread of the disease.

In her Bundestag speech on Thursday, Merkel said: “We are in a dramatic situation that affects us all. Without exception.”

On Wednesday Merkel and state leaders agreed on a shutdown across Germany to take place from November 2nd until the end of the month. It will see the closures of restaurants and leisure facilities but schools and shops will remain open.

Merkel said health authorities in Germany are already overburdened by the Covid-19 spread, and that 75 percent of infections can no longer be traced.

If the increase in cases continues at this rate, intensive care wards would soon be overburdened, said the Christian Democrat Union (CDU) politician. The tough new measures being adopted are therefore “appropriate, necessary and proportionate”.

The aim is to have a “systematic reduction of contacts” in the population, said Merkel. Health workers need to be able to trace the chains of infection. That's the only way the risk of outbreaks can be reduced, she said.

'The pandemic will end'

Merkel said the pandemic is putting society to the test, in medical, political, economic and social terms.

Germany would only be able to meet this challenge with cohesion and a willingness to support each other.

Only “with and for each other” could Germany get through “this historical crisis”, said Merkel. “The winter will be hard. Four long, hard months. But it will end.”

The Chancellor praised the work of the Robert Koch Institute (RKI) for disease control and reminded her audience to use the coronavirus app.

Merkel showed understanding for restaurant, bar, hotel and cafe workers who are concerned about the renewed closures: “I understand the frustration, indeed the desperation, especially in these areas, very much.”

Many restaurant bosses have drawn up hygiene and safety plans, and were now wondering whether all this had been pointless, she said. However, these concepts would soon be needed again, Merkel stressed.

Merkel warned that propaganda and conspiracy theories undermine the fight against the pandemic.

“Let me be clear: lies and disinformation, conspiracy and hatred damage not only democratic debate but also the fight against the coronavirus,” she told the lower house of parliament.

The Chancellor was interrupted during her speech by heckling from far-right Alternative for Germany (AfD) party members. It prompted a rare intervention from speaker of the house Wolfgang Schäuble, who threatened unruly MPs with penalties.

Germany came through the first phase of the pandemic better than most of its neighbours, with the total number of deaths now at just over 10,000 in the European Union's most populous country.

But it has been rocked by a series of often large demonstrations against government measures to tame the virus, with activists from the political fringe accusing Merkel of exploiting the pandemic for a power grab.

Merkel pushed back hard against such claims, calling populism “not only unrealistic but also irresponsible”.

“The things that have been proved wrong by science must be called out,” she said.

Merkel is at the height of her popularity as her fourth and final term in office comes to a close next year.

In her statement, Merkel also referred to the dramatic situation in other EU countries, which are struggling with a rapid increase in new infections. However, the Chancellor emphasised that Europe is better prepared this time than it was in spring to keep the restrictions on the European internal market as low as possible.

Merkel's Bundestag speech is the third since the beginning of the pandemic. It was followed by a 90 minute debate between political parties.