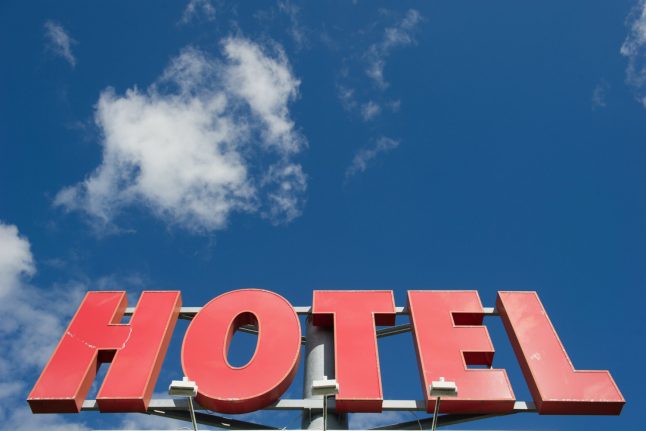 A hotel sign in Mecklenburg-Western Pomerania. Hotels will not be open to tourists in November.Photo: DPA

The partial lockdown will apply from Monday November 2nd until the end of the month. After two weeks, the government and states intend to consult and, according to Merkel, “make any necessary adjustments” to measures.

Bavaria's state premier Markus Söder said: “We are prescribing a four-week therapy, if you can say that. We hope that the dose is right, that it is successful.”

Merkel has repeatedly made clear how important it is for people in Germany to drastically reduce their social contacts.

According to the new rules, only members of your own household and one other household – a maximum of 10 people in total – will be allowed to meet in public during the shutdown. Violations of these contact restrictions are to be sanctioned by authorities.

“Groups of people celebrating in public places, in apartments as well as private areas are unacceptable in view of the serious situation in our country,” the resolution agreed between Merkel and state leaders states.

Experts believe the number of new infections per day must be brought down to 4,000 to prevent a dramatic increase in the number of Covid-19 deaths. This would require a reduction of contacts by 50 to 75 percent over several weeks in order to achieve a significant turnaround by December.

As of Thursday October 29th, the number of new infections within 24 hours had climbed to 16,774, reported the Robert Koch Institute (RKI).

Schools and daycare centres are to remain open in November despite the sharp rise in coronavirus numbers, the panel decided. Closures should only be a “last resort”. There are two local lockdowns currently in place in Germany, in Bavaria's Bercthesgadener Land and Rottal-Inn, and school closures are in place there due to extremely high figures.

Cafes, restaurants, bars and other similar venues are to close from November 2nd for the rest of the month. Exceptions will be made for the delivery and collection of food for consumption at home and canteens will be allowed to remain open.

This is a very controversial point. Not all state leaders were convinced of the need for this before the meeting. And according to the RKI, restaurants are not the drivers of the pandemic.

Recreational and amateur sports are also not allowed, with the exception of individual sports alone, in pairs or with one's own household on and in all public and private sports facilities.

Professional sports will only be allowed without spectators in November. This also applies to the German Football League. Personal care businesses such as beauty salons, massage parlours or tattoo parlours will also have to close in November. Medically necessary treatments, for example physiotherapy, will continue to be possible. Unlike in spring, hairdressing salons will also remain open under the existing hygiene regulations.

All stores can remain open during the November shutdown but with tougher restrictions. No more than one customer per 10 square metres is allowed in shops, though In the draft resolution of the Federal Government, 25 square metres had originally been mentioned.

Confusing internal travel restrictions in Germany's states have been slammed in recent weeks. But now there is a uniform rule: the government is issuing a ban on domestic tourist accommodation across Germany in November. It means hotels and other accommodation will only be allowed for essential business trips and the like – not tourist purposes.

Both the federal and state governments agree that the borders should remain open as much as possible, unlike in spring, even though the growing Covid-19 numbers in Bavaria, and in neighbouring Czech Republic and Austria are causing concern. This week, Bavarian authorities pleaded for people in Austria not to cross the border for non-essential reasons.

In the first wave in spring, old people's homes were sealed off with strict visitor restrictions to protect residents from infections. But this can lead to social isolation, authorities believe.

The government and states want to give special protection to vulnerable groups instead with the availability of rapid coronavirus tests. They “should now be used quickly and as a priority in this area”.

The aim is not to leave groups isolated.  Social and youth welfare institutions and comparable counselling facilities will remain open.

A multi-billion euro aid programme is being put together to help affected companies cushion the loss of turnover caused by the restrictions.

Specifically, companies with up to 50 employees and self-employed people will be compensated for 75 percent of the loss of turnover. For larger companies, the percentages will be determined in accordance with European guidelines on state aid law.

Federal Finance Minister Olaf Scholz and Economics Minister Peter Altmaier are to finalise the details this week. Up to €10 billion has been earmarked for financial aid.

As Germany is a federal country, states will implement the rules agreed. The decisions in Wednesday's meeting have been, on the whole, supported by all state premiers, despite the fact the infection situation differs considerably across the country. At the previous conferences with the Chancellor, there had been major disagreements.

There is a slight exception though: the central eastern state of Thuringia only supports “those measures which are suitable and proportionate for effectively containing the incidence of infection based on scientific findings”, according to a statement in the minutes of the state chancellery. This could mean there are slight differences in this state.