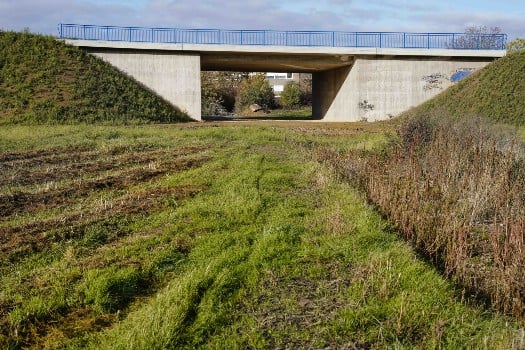 The 'just there' bridge in Baden-Württemberg. Photo: DPA

The worst public spending sin in BaWü is a literal bridge to nowhere.

Here's the story: the district of Ladenburg in  Baden-Württemberg is planning a new state road. So far they have built a €1.2 million bridge over a rail track. The private owner of the track already had plans to dismantle the track, though. And the state road also still hasn’t been built, meaning the bridge is currently just standing in the middle of nowhere, neither connected to a road nor actually bridging anything.

The taxpayers’ association are annoyed by a tunnel that is being built to connect the old and new town halls in the town of Erding. The town justified the construction of the €1.1 million tunnel by saying that there was a “need for coordination” between the city hall employees. The Taxpayers' Association asked why employees can’t simply cross the road.

This is a tax sin to blow all the other out of the water – counting in the billions rather than millions. Early in the corona pandemic Berlin started sending money to companies who had applied for emergency funding just eight days after setting out the rules. The Taxpayers' Association criticizes the process as having been too fast to check that the applications were kosher. It says the capital wasted at least €1.6 billion. The historical sailing ship, the “Seute Deern” sank in Bremen’s harbour in August last year. Built in 1919, the ship caught fire earlier in the year and the damage sustained then appears to have led to the sinking. The German Bundestag promised to reconstruct the ship at a cost of up to €46 million, an expense the Taxpayers' Association considers a waste.

Germany is well known for its tardiness on digitalization. One example can be found in the stations of Hamburg police forces, which still have 8,082 computers running the Windows 7 operating system. Unfortunately Microsoft stopped providing support for the old operating system this year, meaning the Hanseatic city has had to sign an extended support contract to the tune of €476,000.

The central German state seems to be quite responsible in spending its taxpayers' money. The biggest scandal the black book found here was €80,000 for a rusty bench overseeing an industrial estate in the town of Hanau – although that is quite a sum for a park bench.

Taxpayers’ cash has been used to build an advertising tower next to a state road. But the tower, built for €700,000 is three meters shorter than planned and is barely visible from the street. The Taxpayers’ Association claims that few businesses are interested in paying for advertisements on it.

The town of Parchim in northeast Germany got involved in what must have sounded like a cracking business venture at the time: selling “luxury water” from a 181 metre well for €20 a litre to top notch restaurants. Unfortunately not enough restaurants were convinced the “soft and neutral” water was worth the cost and the company went bust, meaning Parchim lost out on close to €700,000. In Germany’s most populous state the Black Book has found that an app that was designed as part of a university project, and funded by the state to the tune of €1.45 million was a waste of money. The app connects people with restaurants in their neighbourhood and has created food cartoons with emotions. If you pass by a burger joint, a hamburger in the app gets grumpy.

A decade ago the city of Bad Bergzabern and the state of Rhineland-Palatinate bought a villa from its private owner, refurbished it for large amounts of money and then sold it back to him. He has since turned it into a 4-star hotel. Local’s have named the building after former state leader Kurt Beck, calling it Kurt’s Castle. The state lost more than €4 million in the wrong-headed business deal. The town of Völklingendecided to sack the managing director of the Völklinger Hütte, an industrial monument. But it put the wrong address on the letter of dismissal, meaning he was never officially axed. The manager won in the first instance of a legal debate. In the second, the parties agreed on a settlement payment. The total cost: €150,000.

Saxony-Anhalt loves its rare field hamster, which can only be a good thing. But the taxpayers association thinks that €20,000 per hamster is too much for a breeding station set to be built in the eastern state.

This year, Saxony’s state leader Michael Kretschmer sent an Easter letter to every single one of the state’s residents. The letter explained what was happening with the coronavirus and asked for solidarity. Critics say it was a “trivial collection of slogans without the slightest factual content”. An alternative to the €420,000 spend would have been a free speech on the radio, the taxpayers association says.

A multi-storey car park in the picturesque city of Lübeck is seen as the biggest sin in S-H. City administrators decided to renovate it three years ago, but it still wasn’t deemed safe for cars. SO it was ripped down after all. The final cost came in at around €900,000.

The town of Mühlhausen has surely built one of the most expensive playgrounds outside of Disney World. It planned €850,000 for the play landscape but the costs went up to €1.1 million because the builders ahd to add in lighting, which has been forgotten in the original planning.  For that kind of money, you’d think the playpark would have flying carpets and umpa lumpas, but it is literally just a couple of slides, a seesaw and a climbing area.