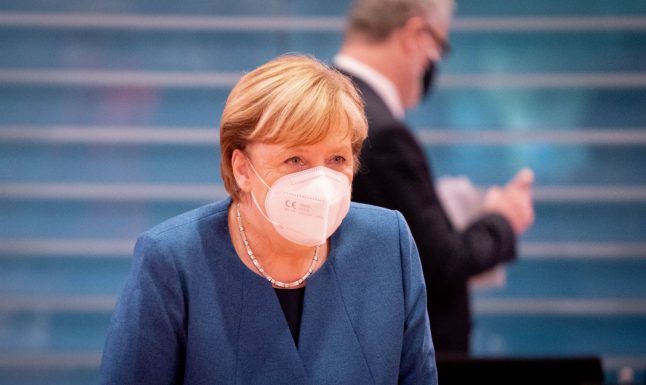 NEW: Germany to close bars and restaurants as Merkel unveils new round of Covid-19 shutdowns

“We need to act and we need to act now,” the Chancellor said at a press conference on Wednesday evening that was also attended by Berlin mayor Michael Müller and Bavarian leader Markus Söder.

The new rules will come into force on Monday November 2nd.

“Our most important instrument against the virus is tracing infections,” said the Chancellor. But she added that the health agencies had reached their limits and were no longer able to trace cases. “For this reason we need to all have a national effort during the month of November.”

Restaurants, bars, theatres and concert halls will all be closed for the entire month.

Merkel also promised an “extraordinary financial package” to help the gastronomy and hotel industry which will be forced to close for four weeks.

Berlin's mayor Müller said that schools and Kitas will stay open throughout the new shutdown.

According to an unconfirmed report in der Spiegel, The package of restrictions will include reducing contact outside the home to two households and a maximum of 10 people.

As The Local has been reporting, the government has proposed a 'lockdown light' for most of November in a bid to 'save Christmas'. It would result in bars, cafes and restaurants closing as well as leisure facilities.

But schools and shops would stay open.

READ MORE HERE: Germany's lockdown proposal to save Christmas: What you need to know

According to insiders, Merkel calculated that if there was no reduction in social contacts by the population, 28,000 infections per day would be reached within a week – double the current figure.

Drosten and Söder for stronger measures

Merkel will no doubt face differing opinions from state leaders in the meeting. Some states, such as those in the east, have not faced high coronavirus rates, so may be against blanket nationwide measures.

North Rhine-Westphalia's state premier Armin Laschet of the Christian Democrats had previously spoken of November as the “decisive month” in view of the rising number of new infections.

And before the conference, Bavaria's state premier Markus Söder (CDU) pleaded for tougher corona measures: “Better to do it now and do it right than to do it late and half-hearted”, said Söder.

Virologist Christian Drosten also argued for a temporary lockdown. “If the burden becomes too great, you have to take a break,” said the Charité-scientist on this podcast on Tuesday evening.

At the moment the incidence in Germany is still comparatively low. “If we were to step on the brakes now, it would have a lasting effect,” Drosten said, buying the country time.

In the scientist's view, this would take about three weeks – a little more than a quarantine period. “The incidence is then considerably lowered and is then also lowered for a longer period under certain circumstances,” he said.

Measures 'must not cause new damage'

But virologists Jonas Schmidt-Chanasit and Hendrik Streeck, together with the National Association of Statutory Health Insurance Physicians (KBV), put forward a paper on Wednesday questioning if a lockdown was really needed.

“We are already experiencing a failure to provide other urgent medical treatment, serious side effects in children and young people due to social deprivation and breaks in educational and vocational training courses, the decline of entire economic sectors, many cultural institutions and increasing social imbalance as a result,” the authors write in the paper.

The principle must be to choose the measures to contain the pandemic “in such a way that we effectively reduce severe events without causing new damage”, they said.

On Wednesday morning, health authorities reported 14,964 new corona infections within one day – a record since the beginning of the pandemic. A week ago the number was 7,595. However, the current figures are not fully comparable with those from spring, as more tests are now being carried out and therefore more infections are being detected.

Still, experts have raised fears over the speed at which infection numbers are growing and it is becoming difficult to contact trace.