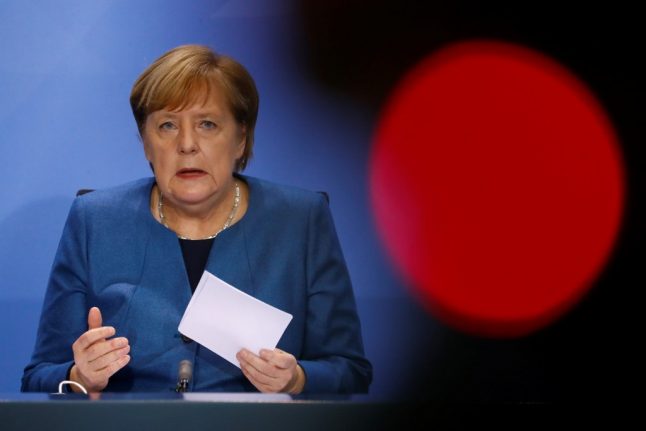 This article has been made free to read for short period of time. The Local relies on its members to continue over coverage of Germany. Please consider joining.

“We need to act and we need to act now,” Angela Merkel said at a press conference on Wednesday evening that was also attended by Berlin mayor Michael Müller and Bavarian leader Markus Söder.

“These are tough new restrictions,” she said adding that Germany will offer €10 billion euros in aid to shutdown-hit sectors.

Restaurants, bars, theatres and concert halls will all be closed for the entire month.

The tough restrictions, which will kick in from Monday, November 2nd, and last to the end of the month, will also limit the number of people gathering to a maximum of ten individuals from two households.

“Our most important instrument against the virus is tracing infections,” said the Chancellor. But she added that the health agencies had reached their limits and were no longer able to trace cases. “For this reason we need to all have a national effort during the month of November.”

“We are now at a point where on average nationally, we no longer know where 75 percent of infections come from,” she added.

Merkel also promised an “extraordinary financial package” to help the gastronomy and hotel industry which will be forced to close for four weeks.

The Chancellor acknowledged that the measures were “strict” and “arduous” but she noted that at the current rate of new infections, “we will reach the limits of the health system”.

The number of new cases has doubled from a week earlier, while the number of people in intensive care has also doubled in the last 10 days, she noted.

“The curve must be flattened again… so that contact tracing can be once again carried out,” she said.

As The Local has been reporting, the government has proposed a 'lockdown light' for most of November in a bid to 'save Christmas'.

Müller said that “If we watch now, we will not be able to help many people,. This is very about health and human life.”

The Berlin mayor said that intensive care units in Berlin were now as full as they had been at the start of the pandemic in March.

According to insiders, Merkel calculated that if there was no reduction in social contacts by the population, 28,000 infections per day would be reached within a week – double the current figure.

The aim is to “break the infection momentum, so that over Christmas, there will be no far-reaching restrictions with regards to personal contact and economic activities,” according to a draft of the measures seen by AFP.

“Family and friends should be allowed to meet under corona-conditions over Christmas. This requires a common effort now, just like in spring,” it added, in reference to the measures also imposed back then.

Health Minister Jens Spahn, who is working from home after testing positive for the virus, said urgent action was required.

“If we wait until the intensive care beds are full, then it will be too late,” he told regional broadcaster Suedwestrundfunk.