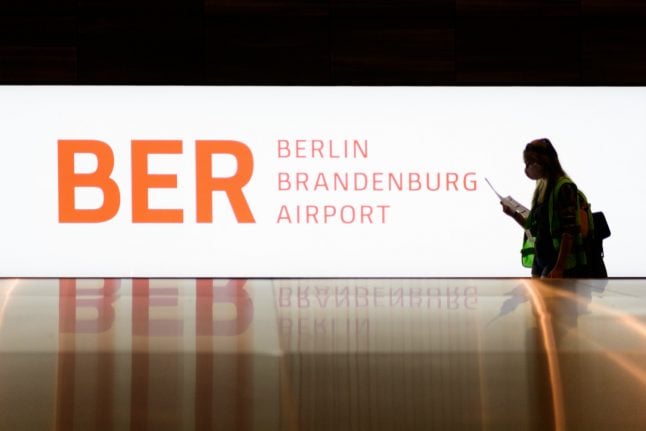 The new airport is ready for take off... finally. Photo: DPA

“We are ready for take-off!” insists the management team at the new Berlin Brandenburg Airport (BER), set to replace the German capital's ageing Tegel and Schönefeld airports.

But the mood is one of relief rather than celebration.

Ever since construction began on BER in 2006, the project has been dogged by one failure after another, becoming a financial black hole and a national laughing stock — not exactly an example of German efficiency.

The airport, located in the south-east of the capital, was originally due to open in 2011.

Now it is opening its doors in the middle of the worst crisis the aviation industry has ever seen, as Covid-19 restrictions continue to suffocate air travel.

And as if that were not enough, there's also the climate crisis: pressure group Extinction Rebellion is planning acts of “civil disobedience” on the opening day to protest against the impact of aviation on global warming.

'Not have a party'

Against that backdrop, “We will simply open, we will not have a party,” according to Engelbert Luetke Daldrup, president of the airport's management company.

Lufthansa and EasyJet will be the first two airlines to touch down on the tarmac of what will be Germany's third-largest airport, after Frankfurt and Munich.

A few days before the opening, around 200 staff were busy disinfecting the 360,000-square-metre Terminal 1.

Some 100 alcoholic hand gel dispensers have been installed and robot vacuum cleaners hum over the floors.

The “Magic Carpet”, a huge, bright red artwork by American artist Pae White suspended from the ceiling, brings a touch of colour to the check-in hall.

The airport has been designed to welcome 27 million passengers a year, but in November it will see only 20 percent of usual air traffic thanks to the pandemic. About 15 shops and restaurants out of just over 100 will remain shut, while the rest will be forced to keep “limited opening hours” because of low traffic through the airport, a spokesman told AFP.

The airport has been granted €300 million ($353 billion) in state aid to help safeguard the jobs of the 20,000 people who will eventually work there until the end of 2020.

SEE ALSO:  Inside Berlin's long-delayed BER before it opens

The health crisis is already having an impact on employment at the hub: at the end of July, Berlin's airports announced the loss of 400 jobs out of a total of 2,100.

EasyJet has said it will cut 418 jobs in the German capital, and Europe's leading airline Lufthansa, Germany's flagship carrier, is to shed 30,000 jobs worldwide.

“We fear even greater job losses in the future,” a spokesman for the Verdi union told AFP.

Lütke Daldrup hopes the situation will improve “from the spring onwards”.

But the International Air Transport Association (IATA) does not expect global air traffic to reach pre-crisis levels until 2024.

In the state of Brandenburg, which surrounds Berlin, local leaders remain optimistic about the prospects for development.

“No hotel has so far postponed its investment plans because of the pandemic,” insists Olaf Lücke, president of the local branch of Germany's hotel and catering trade union (DEHOGA).

And in anticipation of the opening of BER, US electric-car giant Tesla has chosen Brandenburg as the location of its first European factory, which is set to employ 40,000 people.

“Having new, modern infrastructure will be beneficial in any case, despite the pandemic,” according to Carsten Brönstrup of the state employers' association.

But “if there is not a vaccine soon, it will be a very big problem,” he admits.