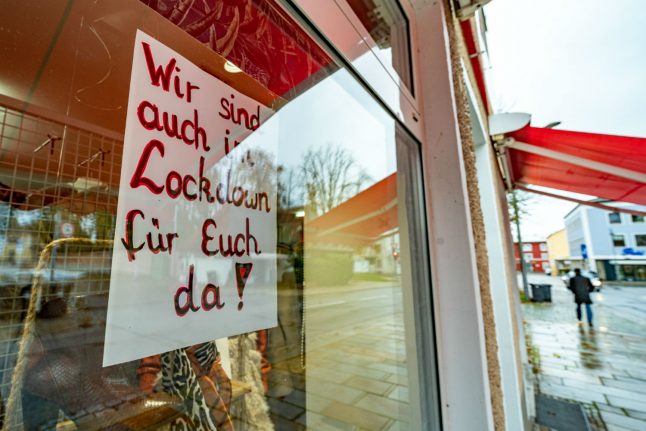 A shop sign in Pfarrkirchen, Bavaria reads: 'We are also there for you in lockdown'. Photo: DPA

Why the change of  heart?

Leading politicians have so far said they want to avoid nationwide action like a lockdown.

But with spiralling coronavirus rates, and two districts in Germany currently under lockdown (Rottal-Inn and Berchtesgadener Land near the Austrian border), authorities are thinking about stronger action.

Germany reported 11,409 new coronavirus cases within 24 hours on Tuesday. One week ago the number was 6,868.

To try and flatten the curve of the first coronavirus wave in spring, the federal and state governments took the unprecedented decision to close schools and daycare centres as well as cultural and sports facilities.

Most restaurants, shops and service providers had to close or limit operations, and gatherings in churches, sports clubs and the like were prohibited. No more than two people from different households were allowed to meet. At the peak of the lockdown, residents were not allowed to leave their homes unless for essential reasons like exercise or shopping.

So would this happen again? Is the whole of Germany now facing a lockdown like in the Bavarian districts?

Earlier in the month, the government agreed a tier system for dealing with Covid-19: when districts reach thresholds, such as 50 new infections per 100,000 people in seven days, they must implement tougher measures.

But Merkel acknowledged then that this might not be enough to slow down the spread. The issue is that contact tracing becomes impossible if the number of infections rises too quickly. There is also the fear that hospitals will become overburdened leading to more people dying.

According to German media reports, Merkel is in favour of a so-called “lockdown light”, with an emphasis on keeping schools and Kitas open except in the worst affected areas.

This kind of action would involve closing restaurants and bars, and putting strict limits on private and public gatherings . Shops could remain open with further restrictions in place. However, there are question marks over whether the hospitality industry significantly contributes to the spread of coronavirus. The Robert Koch Institute has so far not singled out the catering trade as a main driver of the pandemic. The RKI instead has said social gatherings and travel have been major issues when it comes to outbreaks.

Merkel has underlined several times that she wants to avoid excluding the elderly and other vulnerable people from social and public life in Germany. So it's likely that this route – urging those more at risk of contracting a severe course of Covid-19 to isolate – will not be followed.

Another idea is a short but tough shutdown, which has been put forward by deputy state premier of Baden-Württemberger Thomas Strobl, of the Christian Democrats (CDU). If the figures continue to develop upwards, measures “such as closing down everything for a week” should be considered, Strobl told the news portal The Pioneer.

In contrast to the 'lockdown light', schools, daycare centres and shops would have to close. This way, infection numbers could be brought to a standstill, said Strobl.

Moreover, border controls would have to be re-established – something Germany has wanted to avoid up until now. The advantage of this “very, very tough” solution would be the time limit, according to the CDU politician. After action like this, Christmas shopping and a festive reunion with the family would be possible again, he said.

Previously, the head of the German Institute for Economic Research (DIW), Marcel Fratzscher, had also brought a “short, sharp lockdown” into play. “No trading for two or three weeks – and then it can start again,” Fratzscher said on Monday to broadcaster SWR. The economy could return to normality relatively quickly after this kind of action, he said.

Social Democrat (SPD) health expert Karl Lauterbach has also called for a temporary shutdown in the near future to stop the exponential growth of coronavirus infections.

This would involve a two week lockdown, closing bars, restaurants, gyms and other leisure facilities. He said this would prevent a full lockdown in three to four weeks time.

Speaking to the Phoenix TV station, Lauterbach said: “We need breathing space, a kind of 'breakwater' lockdown. We need to get out of the exponential growth, otherwise we'll be back to where we were in spring in three weeks, only we'll be facing a long winter and have to go into a complete lockdown.”

There is no alternative, he warned, exponential growth does not allow for a “third option”.

Lauterbach said Germany needed only to look at neighbouring countries like the Czech Republic to see which way the pandemic was going.

“We are only ten to 15 days behind,” Lauterbach warned.

Schools and care facilities, should be kept open as long as possible, he said “We must fight for this,” said the SPD politician. “We need a massive reduction of contacts in the next few weeks to stop the growth,” said Lauterbach.

Another initiative called “Plan C” may also be discussed. This would involve a 'voluntary lockdown' by people in Germany for seven days a month. During this time they would be asked to limit their contacts significantly.

After that people would be able to live relatively normally, with masks and distance rules. A new lockdown week would follow after three weeks. The rhythm is aimed at interrupting the second wave constantly.

The concept originates from a group put together by the Mainz-based crisis and communication consultant Marcus Ewald. He told broadcaster ZDF that doctors, restaurateurs and entrepreneurs from all over Germany are part of the group.

The first 'voluntary lockdown' is proposed to take place from November 8th to 14th, Ewald said.

READ ALSO: Analysis: How and why coronavirus cases are going up around Germany