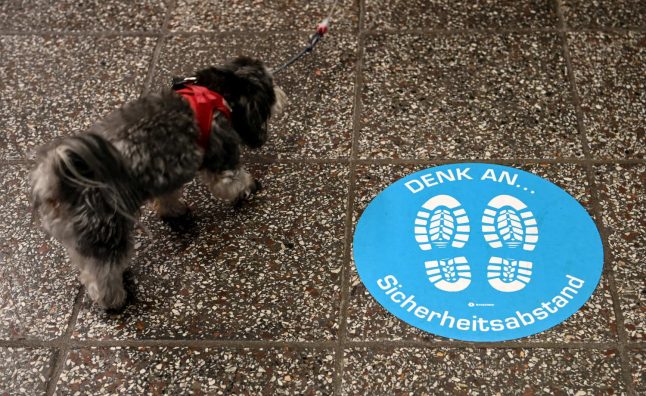 A sign urging for safe distance in Berlin. Photo: DPA

The number of Covid-19 infections is rising rapidly in Germany, leading to talk of a possible “lockdown light” which would involve widespread restrictions.

Germany's response to the pandemic so far has been praised across the world. But what do people living in the country think? And are residents adapting their behaviour and cutting down on socialising?

Mixed response on how Germany is handling pandemic

According to our survey, more than 36 percent of readers believe Germany is doing “quite well compared to other countries” when it comes to the general handling of the pandemic. Some people even went further: nearly 16 percent said the country is doing “very well” with their response.

Nearly 24 percent said the response has been “okay but there are problems” and more than 18 percent said they didn't think Germany had dealt with the pandemic well at all.

On Tuesday Germany reported 11,409 new coronavirus cases within 24 hours. One week ago the number was 6,868, signalling a worrying rise.

Earlier this month, Angela Merkel and the state leaders introduced a tier system of restrictions for when districts cross certain thresholds, such as 50 new infections per 100,000 residents in seven days.

So is Germany doing enough or should there be more action?

The majority of people who responded to our survey said restrictions should be tougher to clamp down on the second wave.

Alison Cuff in Berlin said:  “I think the response so far has been tinkering around the edges to perhaps save the economy, but I think this approach just makes things worse and will prolong the pandemic.

“They should have had a short complete lockdown the moment that numbers started to increase again.”

There have been 'local lockdowns' such as in Bavaria's Rottal-Inn and Berchtesgadener Land, near the Austrian border, when the numbers climb much higher (in these areas there's been more than 200 new infections per 100,000 people in seven days).

Cuff said this regional action did not address the issues.

She said there “needs to be a complete lockdown of entire country again – selecting regions for tougher measures causes resentment and division”. Martin Kelly, who's also in Berlin, said the restrictions did not go far enough. “The virus is passed most easily unmasked and indoors. Any business model that relies on being unmasked and indoors, such as bars and restaurants, should be temporarily closed,” he said.

Kelly also said there wasn't enough enforcement of rules, an issue that came up a lot for our readers.

Cuff added: “There also needs to be tougher policing of measures such as face masks (people fined for not wearing them properly as well as not wearing them at all), social distancing and groups meeting up.”

Nikunj Prajapati in Frankfurt reiterated that the restrictions are “good but not far enough”.

Prajapati praised Germany's contact tracing strategy but called for more clear communication: “Corona warriors are doing a great job. There should be strict message for private gatherings and parties. The second wave is considerably bigger.”

However, Prajapti wasn't convinced on a second shutdown: “It would really hurt the economy if a lockdown like situation has to be applied.”

As we touched on earlier, Germany is a federal country so implementation of any coronavirus rules falls to each state. This has caused a lot of confusion, including with internal travel restrictions which vary dramatically. In some states there have been overnight bans on people coming from German risk zones.

Georg said: “The government seems completely out of touch with the people and what is actually going on. Travel restrictions after months of urging for local travel are confusing and frustrating.”

In fact many of the respondents said nationwide, clear rules would be much easier to follow.

“It's overly complicated to have neighborhoods as hotspots. Bans should be city wide,” Arnav Luthra in Berlin said.

Drew Campbell in Munich said restrictions had “to be uniform and consistent country wide or they are of little value”.

Elizabeth Voege in Herzogenrath suggested that the government set up a clearer website with updated rules for the whole country. Currently the federal government links to state government websites.

Meanwhile, Angela Edwards in Bensheim added: “The rules are confusing and every region is doing its own thing.”

'The second wave will not be stopped by these measures'

But the country also has a couple areas of improvement: “More people should be employed to man health line call centre numbers, testing should be more accessible,” said Dormagen-Zons.

“It is not easy to get through if you're unsure if you should get tested or not so that equals heaps of people who are probably not getting tested at all.”

And not everyone thinks that tough restrictions are the way forward. A small number of readers told us the messaging from Merkel and the government “increases anxiety and panic in society”.

“Germany is damaging economics and violating human rights for a poor reason: the second wave will not be stopped by these measures,” said one respondent.

Melvin Chelli in Saarbrücken said: “A more measured approach is good, no panic induced lock downs are good too.” But he added: “Restriction on unimportant social meetings could be stricter.”

How are people changing their behaviour?

Nearly everyone who got in touch with us said they had adapted their life to the pandemic. Working from home and only seeing a small group of friends and family were referenced several times, as well as avoiding parties.

Anurag R Andrade said: “I think most of us know and understand the severity of the situation, for example my parents are senior citizens who live in another country where I cannot travel at the moment, most probably not until the vaccine is out. I, like so many in the city, have been helping a few of my elderly neighbours (some who are 80+) since March.

“Thinking of them pushes me to take all the extra precautions. I am glad that they can go out for a walk, get fresh air (in so many countries this is impossible). As long as they can avoid going to crowded spaces, they should have the right to live the rest of their days as normally as they can.” Estefania Campo, in the Ludwigsburg district, said: “We have the same behaviour as from the beginning (of the pandemic). All social activities are limited and only outdoors .

“Masks in public and no indoor activities except supermarket, pharmacy and doctors office. Working from home and no public transportation.”

Merkel and other politicians have been urging people to take responsiblity and follow restrictions as well as hygiene and distance rules. Is it working? Some people aren't convinced.

Andrade said: “I am not sure if the few rules applied are being followed properly by the people. For example I hear of so many cases where in public transport people aren't necessarily using masks at all or properly. I have avoided public transport so far. “

Siddharth Shukla in Berlin said he has been working from home since the start of the pandemic and his response has been the same throughout the months. “Staying indoors, no parties, social distancing and mask wearing,” he said.

When it comes to other Shukla said the message isn't getting through, especially to young people.

“Regulation on masks in public places has been working out okay but in a lot of places it is not being enforced. Same with social distancing not being followed. There are very few repercussions, if any, for flouting rules,” Shukla said.

“The government needs to get its messaging to the youth.”

Emilie Wong added: “Many public areas are still busy and no one wears their masks.”

Lyle Shumate in Dresden also flagged up that people are struggling with the restrictions at this stage, saying “there is a sense of burnout from the ongoing pandemic.”

***
Thanks to everyone who shared their experience with us. Although we weren't able to include all the submissions, we read each of them and we are truly sympathetic to the challenges everyone is facing right now during this pandemic.
If there's anything you'd like to ask or tell us about our coronavirus coverage or how the outbreak has affected you, please feel free to get in touch.