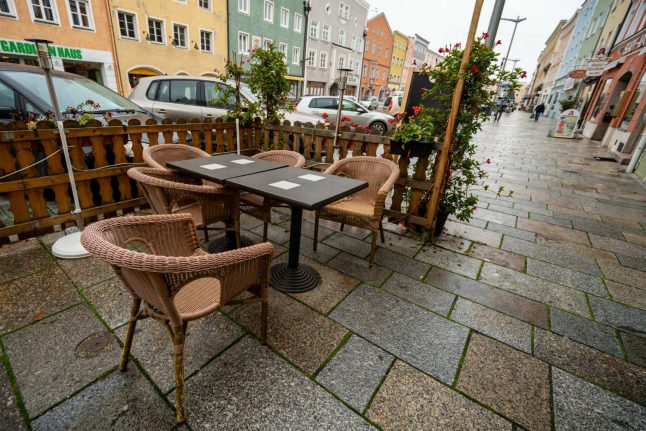 A restaurant in Rottal-Inn, Bavaria, which is set to go into lockdown. Photo: DPA

Under this plan, schools and shops would remain open with more restrictions, and only close if the situation was extremely severe. However other parts of public life, such as the hospitality sector, would be shut down for a period of time.

Wednesday's meeting between Merkel and Germany's 16 state leaders is being held to discuss how to slow down the spread of coronavirus. In the discussions, Merkel is expected to push for far-reaching measures such as a “lockdown light”, said BIld.

But the government has remained tight-lipped on the plans. Merkel's spokesman Steffen Seibert did, however, say on Monday that the aim was to discuss how to break the rising trend as fast as possible. Everyone is aware “that every day counts,” he said.

A lockdown, which means far-reaching restrictions on public life, would be a major escalation for Germany, where authorities have so far tried to avoid any nationwide action.

To combat the first wave of coronavirus in spring, the federal and state governments decided to close schools and day-care centres plus cultural and sports facilities to the public.

Most restaurants, shops and service providers were not allowed to receive customers, and gatherings in churches or sports clubs were prohibited. No more than two people from different households were allowed to meet.

Another district in lockdown

So far, the country has been focusing on local lockdowns.

The Bavarian district of Rottal-Inn became the latest to enter a lockdown. It follows Berchtesgadener Land, which entered a shutdown on October 20th.

Rottal-Inn reported 228 new infections per 100,000 people over the past week. Residents will only be allowed to leave their own homes for essential reasons, according to the District Office. That could be for work, essential shopping or outdoor exercise.

Schools and day-care centres are initially closed for the next 10 days, indicating how severe the situation is. Catering outlets can only offer take-away food. However, unlike in spring, many shops can remain open.

When districts reach thresholds, such as 50 new infections per 100,000 people in seven days, they must implement tougher measures.

Germany reported 11,409 new coronavirus cases within 24 hours on Tuesday. One week ago the number was 6,868.

According to the Robert Koch Institute, a total of 449,275 people have contracted Covid-19 in Germany since the beginning of the pandemic. The number of deaths in connection with the virus rose by 42 in the last 24 hours to a total of 10,098. The RKI estimates that around 326,700 people have now recovered.

READ ALSO: Analysis: How and why coronavirus cases are going up around Germany