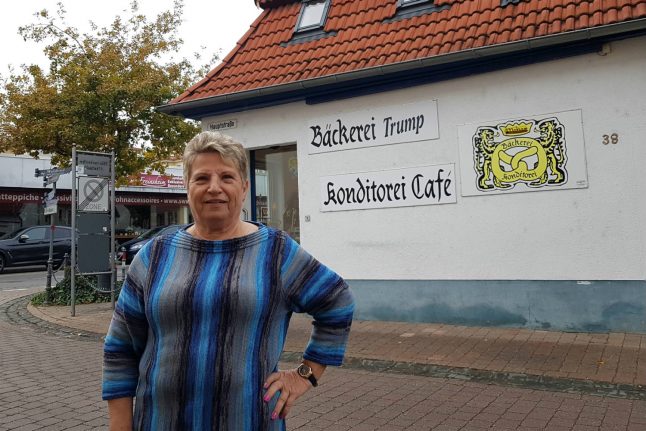 The mayor of Donald Trump's ancestral German village pledged before the US president's surprise 2016 election that if he did anything “great” for America or the world, he would hang a plaque in his honour.

Kallstadt is the tiny wine-growing town in Germany's southwest where Trump's paternal grandparents grew up across the road from one another in humble homes that are still standing.

READ ALSO: Inside the German town with Trump family ties and what it really thinks of him

As the world braces for the climax of another pivotal US election on November 3rd, residents have grown a little weary of the Trump name in their friendly community.

“That was just wishful thinking,” Mayor Thomas Jaworek, 52, told AFP when asked about the plaque.

“Our two countries used to be friends, and our personal friendships remain.

“But when you see (German Chancellor) Angela Merkel and Donald Trump sitting next to each other, you have the feeling there are now worlds between us,” he said, referring to the infamously frosty relationship between the two leaders.

There are no Trumps left in Kallstadt, population 1,200, but one relative in the nearby town of Freinsheim seems to have a bit of the family knack for self-promotion. A grave for Trump family members in Kallstadt. Photo: DPA

Ursula Trump, who at 73 is just a year younger than the president, said that soon after his election she started selling cakes with American flag icing and little Trump emblems made of sugar at the bakery that bears her name.

“People came from everywhere, just for the Trump cakes — it was crazy,” she said with a broad grin. “Even the Russians came.”

That was until a few locals organised a boycott of her shop.

“They said 'why are you advertising for that fool?'.”

“I told them, 'I'm not doing advertising for him — I have his name, why shouldn't I make use of it?'”

Ursula came from a nearby village and as a young woman married Harald Trump, who has traced his connection to the US leader to a common ancestor four generations back.

She said she can see a bit of family resemblance, particularly when her husband gets angry.

“He makes that same face as Donald,” she said, pulling her features into a puckered grimace. “My son does it too.”

She said the family takes light-hearted pride in getting recognised when their name comes up in connection with Trump, pronouncing the name “Droomb” in the regional Palatinate dialect.

When it comes to politics, Ursula said she “doesn't know much” but doesn't care for the president's “hatefulness toward women”.

She thinks the transatlantic alliance, fostered in the region by the decades-long presence of thousands of GIs at bases such as Ramstein, Kaiserslautern and Spangdahlem, suffered on Trump's watch.

Ursula said she was “not happy” about Trump's plan to slash the number of US troops stationed in Germany by 9,500 to 25,000.

“The Americans and the Germans are great together. The American-German friendship was built up over many years because the Americans were here. I think that could break it.”

Although there are still a few dozen Trumps in the area, most have gotten tired of the media glare.

However Sven Trump, 38, who says he is a distant cousin of the US leader, tried to harness the attention for a “green” campaign last year ahead of UN climate talks in Madrid.

READ ALSO: 'I have German in my blood': US President Trump on his plans to visit Merkel

Sporting a familiar red cap with the slogan “Keep the world great” and posing in front of Trump's grandfather's house, he said: “Donald, climate change exists and its consequences affect the USA, and you too!”

Via the Twitter and Instagram accounts @realsventrump, he tried to taunt Trump into rejoining the 2015 Paris Agreement, which calls for cutting CO2 emissions, and doing his bit by cutting out fast food and golfing.

'German in my blood' “You get groups stopping in front of it and posing for selfies but there were a lot more three years ago,” said Leineweber, 53.

He said the impending departure of US soldiers was just one symbol of the end of an era in post-war relations with America.

“There's no longer the trust we once had,” he said.

Trump has never visited Kallstadt and has only made two brief stopovers in Germany as president.

Asked last year about a possible state visit, the president vowed to accept Merkel's invitation with a reference to his familial roots.

“I have German in my blood, I'll be there,” he said. But he has yet to return.

Jaworek, the mayor, belongs to Merkel's centre-right Christian Democratic Union. He said he had been shocked to see Trump deal so harshly with Germany over disputes such as trade and defence spending.

“At the same time, he seeks out those who were never America's friends like North Korea,” Jaworek said.

He sounded relieved he had dodged having to organise a possible presidential visit — so far.

“Maybe the whole thing will be over in early November anyway,” he said.