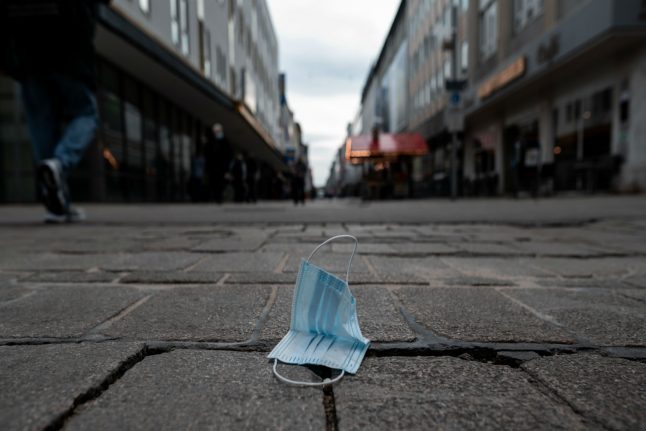 A face mask lays on the ground in Oberhausen, North Rhine-Westphalia, one of the areas classified as a risk area. Photo: DPA

READ ALSO: Explained: How and why coronavirus cases are going up around Germany

It is still possible to bring the virus under control through “systematic compliance with restrictive measures”, Wieler said.

But he urged people to observe the rules and cautioned that an “uncontrolled” spread could be unavoidable in some regions.

Germany was praised for managing to contain the virus earlier this year, even welcoming patients from other countries where health systems were buckling under the strain.

The figures are still well below those of many other European countries, but Germany has been facing a steady increase in cases for several weeks.

There are currently 964 virus patients in intensive care, 430 of them on respirators, according to the German Association for Intensive and Emergency Medicine (DIVI).

The number is still far from the record set in mid-April, but 21,401 of the country's 29,799 intensive care beds are now occupied.

At a meeting last week between Chancellor Angela Merkel and the heads of Germany's 16 states last week, new measures were agreed for so-called hotspots, including caps on the number of people gathering indoors and a ban on late-night alcohol sales.

But under Germany's federal system, each state ultimately has the right to decide whether to impose the rules, leading to a patchwork of regulations. One measure that has proved especially controversial is a travel ban that theoretically prevents people from risk areas within Germany from booking overnight accommodation in another state.

But many of Germany's states have refused to comply with the ban, while in others it has been overturned by local courts.

Similarly, some cities are enforcing early closing times for restaurants and bars, but in Berlin the measure was overturned by a legal ruling.

Bavaria, meanwhile, has imposed a full lockdown in the Alpine resort of Berchtesgaden, which has the highest rate of new infections in the country.

Merkel expressed doubt that the new measures would be enough last week, saying “my worry is still not gone after today”.

On Saturday, she asked people to cut down on socialising, encouraging them to stay at home instead.

“What winter will be, what our Christmas will be, will be decided in the days and weeks to come,” she said.

READ ALSO: Merkel appeals to Germans to stay home now to save Christmas

Wieler on Thursday blamed private gatherings, especially among young people, for the dramatic rise in cases.

“The more people gather in private circles, the more the numbers will increase and the further the virus will spread,” he said, adding that young people were currently “the most exposed”.

At least 392,049 people have been infected in Germany since the outbreak of the virus, with 9,905 deaths reported.