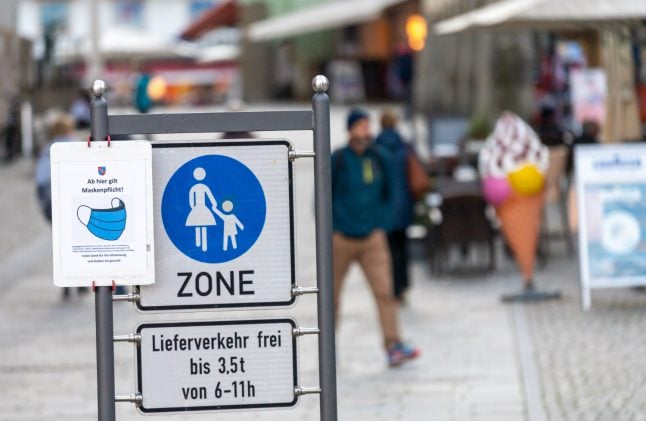 A lockdown is in place in Berchtesgaden. Photo: DPA

The popular alpine beauty spot of Berchtesgadener Land went into lockdown on Tuesday afternoon for two weeks after cases of coronavirus shot up.

But politicians, health experts and district representatives believe that similar measures may be necessary elsewhere in Germany as Covid-19 numbers continue to go up.

How tough the measures are depends on the incidence of infection and the ability of health authorities to contain it, said federal Health Minister Jens Spahn of the Christian Democrats (CDU) on broadcaster ZDF.

If numbers spiral out of control, “this may indeed lead to appropriate measures in other areas at local and regional level,” said Spahn.

The Health Minister defended the regional approach, saying the aim was to avoid a nationwide lockdown similar to what happened in March and April 2020.

“This is exactly the approach we are taking, not to take uniform measures throughout Germany, but always in a situation-adapted manner,” said Spahn. “And I am convinced that this will lead to better acceptance.”

Hesse's state premier Volker Bouffier, also of the CDU, did not rule out local lockdowns either. “The situation is serious, we have an extremely dynamic development,” he told the newspapers of the Funke media group.

Epidemiologist and SPD health expert Karl Lauterbach also told these papers: “We will now see things like in Berchtesgaden more often. We can only react with local shutdowns, so they are appropriate.”

The Association of Towns and Municipalities said these tough measures restricting public life shouldn't be ruled out even for large cities.

“If the numbers go up like they are now in Berchtesgadener Land, then I can – unfortunately – imagine this even in larger cities,” CEO Gerd Landsberg told Bild newspaper. Although the administrative burden of enforcement is “significantly higher” in big city districts such as Berlin-Neukölln, he said it is manageable.

As of Wednesday, the Robert Koch Institute reported 7,595 new cases within 24 hours, slightly below the peak of 7,830 registered on Saturday, but well above the 5,132 new infections reported a week ago on October 14th.

Since the beginning of the pandemic there have been at least 380,762 coronavirus infections in Germany, with 9,875 deaths. The number of deaths rose by 39 within 24 hours, according to RKI.

The Bavarian district of Berchtesgaden is by far the nationwide leader in the number of new coronavirus infections per 100,000 inhabitants within seven days, with 236. For the first time since spring, leaving your own home as of Tuesday is only allowed for essential reasons. Schools and day-care centres have been closed.

Bavaria as a whole is now also above the nationally agreed incidence warning value of 50 cases per 100,000 people in seven days. State premier Markus Söder, of the Christian Social Union (CSU), was planning to make a government statement on his strategy in the fight against the virus in state parliament on Wednesday.

He has been calling for more nationwide uniform measures, such as tougher face mask rules.

Throughout the crisis Söder has been cautious in his approach to dealing with the virus. His swift action has made him a high profile figure in Germany.

Bavaria, with 13 million people, has been one of the worst affected German states in the pandemic. During the carnival holidays in February 2020 at the start of the crisis, lots of people, including Bavarians, went skiing in South Tyrol and Austria.

According to experts, these skiing holidays are understood to have fuelled the spread of coronavirus, particularly affecting Bavaria but also the rest of Germany.