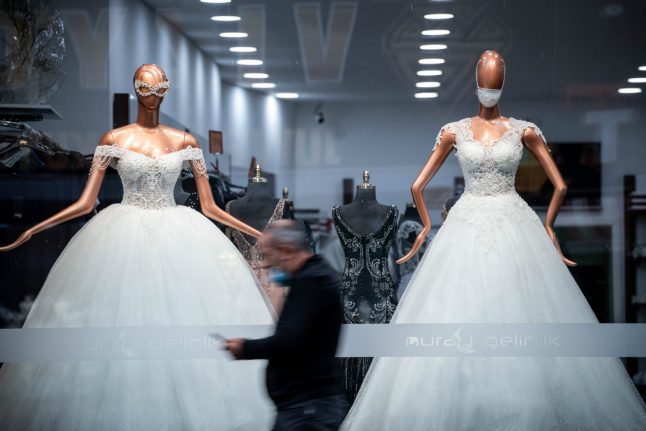 Germany's first local lockdown during the autumn coronavirus resurgence was announced on Tuesday October 20th. For two weeks, residents in Berchtesgadener Land can only leave their homes for essential reasons, such as for work, to exercise or go for shopping.

Experts warn that more tough restrictions on public life will be introduced if the situation doesn't improve. But it's likely local lockdowns will occur rather than a nationwide shutdown like what happened in March.

Currently more than every third district in Germany is classed as a risk area. According to the Robert Koch Institute (RKI), as of Thursday October 22nd a total of 166 of 412 rural and urban districts nationwide exceeded the warning threshold of 50 new infections per 100,000 inhabitants within one week. And 34 of these districts are above an incidence rate of 100.

The average seven-day incidence – the number of new Covid-19 infections per 100,000 inhabitants within seven days – was 51.3 for the whole of Germany.

On October 15th, the federal government and states decided that stricter rules must be put in place if the thresholds of 35 or 50 new infections per 100,000 people in a week are exceeded in regions. This is because it becomes increasingly difficult for authorities track all contacts of newly infected people above this level.

Are we really in a second wave?

It appears that way. Since July, the coronavirus figures have been rising throughout Germany.

As of Thursday October 22nd the RKI reported a huge 11,287 new cases within 24 hours, well above the 5,132 new infections reported just over a week ago on October 14th.

A month ago around September 21st the number of new daily infections was reported to be around 1,800.

This graph by the RKI clearly shows the resurgence. It is based on laboratory-confirmed SARS-CoV-2 new infections after the onset of the disease, statistically adjusted for the typical weekly fluctuations, since the beginning of March up to October 17th.

In March and April during the first peak around 6,000 daily cases were being reported. However, the figures today are not directly comparable to this period because more people are being tested now.

Nevertheless experts say they are concerned about this wave of infections because it's growing quickly and the winter months are ahead: people will be spending more time indoors where Covid-19 spreads more easily.

Since the beginning of the pandemic there have been at least 380762 coronavirus infections in Germany, with 9,875 deaths. The number of deaths rose by 30 within 24 hours, according to the RKI on Thursday October 22nd.

Around 306,100 people are believed to have recovered from the virus so far.

A large number of districts in Bavaria, Berlin, Bremen, North Rhine-Westphalia (NRW) and Saarland are being hit hard.

The DPA map below shows the areas in red and pink where infections are climbing. In eastern and northern states (except Berlin), the situation is less intense. In NRW, two thirds of the population now live in a coronavirus risk area, with around twelve million people living in cities or districts that are above the critical threshold of 50 new infections.

Münster, with a population of around 315,300, was the only major city to remain below the 50 mark with 33 cases per 100,000 inhabitants over the last seven days. The most populous federal state of NRW has just under 18 million residents.

As well as local measures, such as curfews and extended face mask rules, residents living in 'risk zones' are urged not to travel.

READ ALSO: What you need to know about travelling within Germany right now

What do the current figures reflect?

According to experts, because of the time between infection, testing, results and reporting, the newly reported infections are an indication of how much the virus was present in society about a week ago.

Therefore, it takes time for anti-coronavirus measures to be reflected in the reporting figures.

The DPA map below shows the total number of people infected and those who have died in Germany, plus a breakdown state by state. Why are the numbers increasing?

The RKI says the outbreaks in various districts throughout Germany are associated with different situations,”including large celebrations in the family and circle of friends, in occupational settings, and in nursing homes”.

They say a so-called 'diffuse spread of transmissions 'without distinct chains of infection is also evident. That can happen when people come together without enough distance, for example in bars or at parties, as is occurring more as temperatures drop and people are more likely to gather indoors.

In Berchtesgaden, which lies on the border with another hotspot in Austria – the Salzburg region – private parties have been partly blamed for the huge increase in cases.

According to German media reports, a party in Stoißberg with 40 guests could have triggered a large cluster.

What about the number of deaths?

The RKI reports that since the end of July, the proportion of deaths among Covid-19 cases “has been consistently below one percent and is thus markedly lower than among cases in the spring, particularly in April”.

Experts do not think the virus has become less pathogenic. The low proportion of deaths in Germany is because recently infections have been reported in younger people, who rarely experience a severe course of disease. Plus broader testing means more milder cases are identified.

However, this could change. “As elderly and vulnerable people are increasingly infected with SARS-CoV-2, hospitalisations and deaths are increasing,” said the RKI.

Of the 879 patients currently in ICU, 411 are receiving ventilation treatment.

What about Germany compared to other countries?

This map by DPA gives an idea of how Germany is doing compared to other European countries. The number represents the average number of cases per 100,000 people in the last seven days (as of October 21st). Germany is yellow indicating a developing situation but not as serious as the likes of France, Switzerland and Czech Republic. There have also been discussions about putting in border controls with other countries such as Austria and Czech Republic. However, most politicians want to avoid a situation like that again.

People in Germany have been urged to do their bit and cut down on the number of people they socialise with, make sure they keep a 1.5m distance to strangers and regularly air out closed rooms.