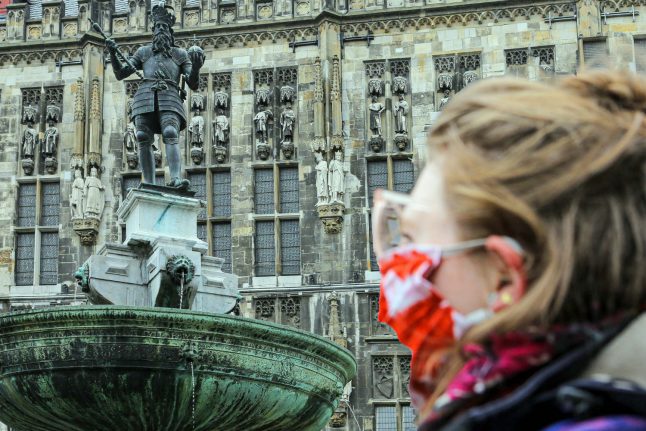 A woman with a facemask at the Marktplatz in Aachen, one of Germany's current hotspots. Photo: DPA

The figure is considerably higher than the 4,122 cases registered one week ago.

The number of new daily infections reached 7,830 on Saturday, the third consecutive record since the beginning of the coronavirus pandemic in Germany.

However, the current figures can only be compared with those from the spring to a limited extent, because considerably more tests are now being carried out – and thus more infections are being detected.

READ ALSO: More than 100 districts declared risk zones in Germany: What you need to know

Since the beginning of the coronavirus crisis, at least 373,167 people in Germany have been infected with the Sars-CoV-2 virus, according to RKI.

There have been 9,836 deaths resulting from the virus, with 47 within the last 24 hours. A total of 298,300 people have reported themselves to have recovered.

According to the RKI management report of Monday, the reproduction rate, or R-value for short, was 1.35 in Germany (down from 1.44 the previous day).

This means that 10 people with coronavirus infect on average 13 to 14 other people. The R-value reflects the course of infection about one and a half weeks before.

As the map below shows, a few regions around Germany are particularly affected. The Bavarian district Berchtesgadener Land went into a lockdown as its seven-day incidence of infections climbed to the highest level in Germany, or 272.8 cases per 100,000 residents.

The RKI considers city or district to be a risk area if infections climb above a value of 50. This graph from DPA shows Germany's current hotspots as of Tuesday morning.

As of Tuesday morning, the entire Ruhr Area in northwest Germany was also catagorised as a risk area, with Cologne showing a value of 97.8. The cities of Aachen, Solingen, Gelsenkirchen and Herne also had values over 100.

In the meantime, the President of the German Teachers' Association, Heinz-Peter Meidinger, called for class sizes to be reduced in coronavirus hotspots.

“At the current values we should return to alternating classes with reduced operation,” he told the Rhein-Neckar-Zeitung on Tuesday.

He added that he does not yet know of any schools in Germany who have been following this model, which was frequently used as schools reopened following the lockdown in March and April.

A Germany-wide debate on sealing off hotspots, such as Berchtesgadener Land in southern Bavaria, also arose on Tuesday.

In light of the rising infections, German Chancellor Angela Merkel recently made an appeal for people in Germany to stay home as much as possible.