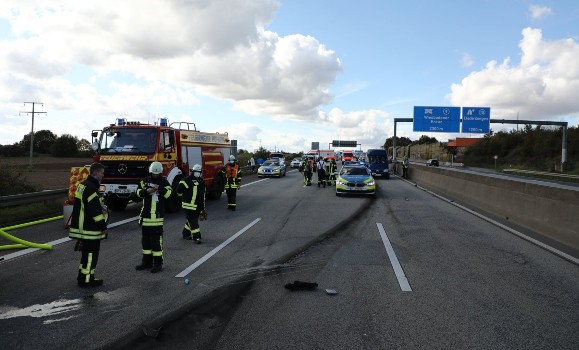 The scene of the accident near Hofheim am Taunus. Photo: DPA

Two of the suspects, aged 29 and 26, were released after one week in custody, a spokeswoman for the Frankfurt public prosecutor's office confirmed on Sunday.

Both men have permanent residency in Germany and are not seen as a flight risk. The search for a third suspect is still on.

The three men are suspected of involvement in an illegal race last Saturday near Hofheim am Taunus which ended in a woman losing her life.

While overtaking at a speed of 200 km/h, one of the men is said to have lost control of his powerful car, crashed into the centre guard rail and then collided with an uninvolved vehicle.

The cars immediately caught fire. An uninvolved woman could not be saved in time. Prosecutors believe that other sports cars may have been involved.

However, the Frankfurt prosecutors now no longer believe that there was intent to kill. This is the result of an expert evaluation of video material, the spokeswoman said. However, she stressed that the investigation is still ongoing.

“It is not the case that there are no longer suspicions of any criminal offences. Investigations are still underway due to the suspicion of an illegal race.”

In this case, which caused a sensation nationwide, the public prosecutor's office initially accused the three accused of murder .

One suspect, a 29-year-old Iranian was taken to hospital after the accident on Saturday last week before being imprisoned.

A 26-year-old German from North Rhine-Westphalia turned himself in to the police and was also behind bars. But there is still no trace of the third suspect, a 34-year-old German-Polish man.

Investigators have published a public search with pictures of the man. And the case was also made the subject of the ZDF programme “Aktenzeichen XY… unsolved”.

The investigators have received numerous tips. But they have not yet been able to catch the fugitive.

In a high profile ruling ion 2010, a Berlin court found two men guilty of murder after the caused the death of an uninvolved driver on the Ku’damm shopping mile.